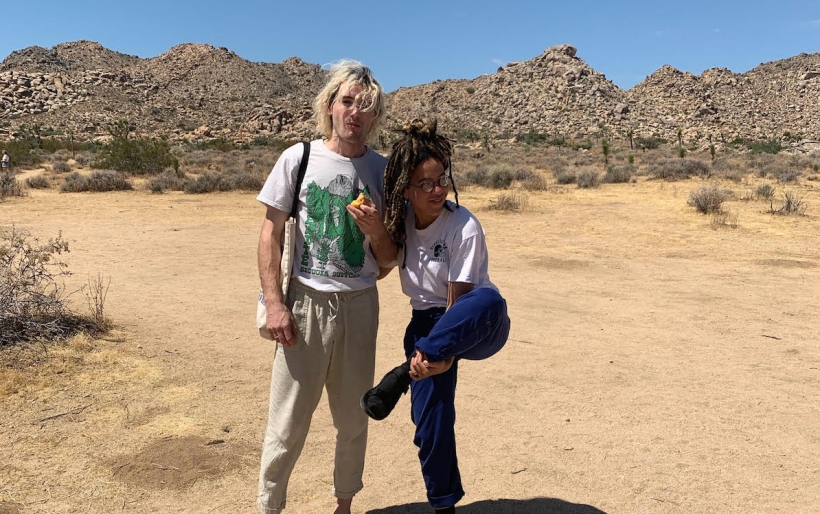 Enchanted Forest | photo by Juliette Rando | courtesy of the artist

Earlier this month, Philadelphia’s Dear Life Records released a noisy, bubbling, beautifully peculiar audiovisual project by Enchanted Forest, entitled, humbly, Research. The experimental duo – Em Boltz (of Corey Flood and Sieve) and Noah Jacobson-Carroll – got inspired to build something totally new while stuck at home in 2020, so they constructed their own synthesizer system over several months and recorded Research to capture what they discovered in the machine.

The two West Philadelphia-based musicians met in 2017 while playing experimental alt rock together in Corey Flood (Boltz still plays guitar in the band), and Boltz began releasing their own electronic material as Enchanted Forest in May 2020. Soon they brought Jacobson-Carroll fully into fold, and together they committed to exploring the possibilities of their own new synthesizer. With a grant from Audiofemme, Boltz set out to re-create, piece by piece, the Buchla Music Easel – a modular system popularized by composers like Suzanne Ciani and Terry Riley in the 1970s. This entails collecting, assembling, and patching together a series of oscillators, filters, signal gates, reverb generators, and other effects that interrupt, augment, or otherwise modulate the electrical signal before it exits the speaker as a sound wave. The process of combing the internet for individual modules that replicate the capabilities of the classic Easel can be grueling, but it gives the builder comprehensive control over the functions of the instrument when it’s done.

Once their Easel could make noise, Boltz began regularly recording its output through a karaoke machine, quickly constructing dozens of tracks together with Jacobson-Carroll through “e-correspondence.” “We were sending so many songs back and forth for months,” they say. “I think we had maybe fifty or sixty songs we thought we might use for the record but condensed it down to about 20. We were both just so enthusiastic to be creating again because the pandemic had brought everything to a halt.” The two add that they felt influenced by Boards of Canada, and “inspired by this idea of creating something that felt really organic and almost a part of nature.”

Their process produced a wonderfully disorienting experience on Research, a 24-minute visual album. This modular machine shines from start to finish, spitting effervescent patterns that swell, peak and ricochet like a rainstorm. Field recordings threaded through build a mystery, and the whole melange can get pretty creepy (see the bitter “We Made Plans”) but by the end it feels like a friendly adventure. My favorite sounds came near the close: the vigorously rhythmic “Teapot,” gorgeous futuristic glances on “Steel.” In a final confounding turn, a fuzzy rendition of Neil Young’s “Cowgirl in the Sand” splatters into the wordless jangle of strings echoing on “James Bow.”

The video collage for Research, created by Boltz, Jacobson-Carroll and Violet Cutler, adds even more mystery, and organicism, too: watching, sometimes I feel adrift among cumulus clouds, sometimes inside someone’s intestine. They deployed a similar visuals on 2020 EP Jacob’s Ladder, but those looked a bit more stable – now everything seems rippling and disappearing, all the time over again. I watch flocks of geese in silhouette, brick walls and sudoku blocks, then oscilloscope readings zap the edge like lightning, as in the video for 2020’s “Bird Rider.” View the full visual album below.

Enchanted Forest’s Research is out now on Dear Life Records (the West Philly label that carries releases by MJ Lenderman, Karl Blau, Friendship), and is available for streaming and cassette. Read more about the project here on Audiofemme, who premiered the visuals for “Open Window” and “The Tap” in April, and find Enchanted Forest in conversation with Jordan Lee of Mutual Benefit for Talkhouse here.