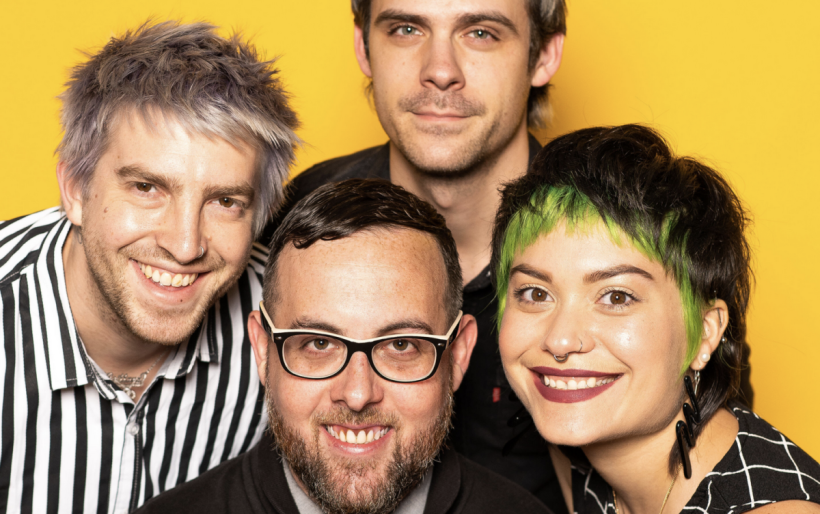 Catbite | photo by Caity Macleod | courtesy of the artist

Catbite knows how to make something out of nothing. After their tour to Japan last year got canceled due to the pandemic, they still had flights booked to L.A. Instead of asking for a refund, the band hit up dream producer Davey Warsop (known for working with Foo Fighters, Green Day, NOFX) and got time at Strong Studios in SoCal for September. The result is their new album Nice One, out on August 6 via Bad Time Records. The first single, “Call Your Bluff” debuted alongside a cute and comical music video today.

A band with quite the range (from yee-haw to hardcore, as we saw in the super fun re-versions of their self-titled debut) the track incorporates ska and punk influences, and lyrically reminds you to harness your inner power and persevere. Ushered in by the whoops and hollers of lead singer Brittany Luna, the song is brimming with confidence. Comfortable in their skin, it’s a fun call out to anyone who tries to tell you to change. Brushing aside snide criticism, Luna proclaims, “I don’t care what you think of me.”

Following a little kid who’s hell-bent on terrorizing the neighborhood, the music video is bound to make you smile. Putting a fun spin on the bad boy trope, he takes a screwdriver to a car tire, threatens the bandmates with a baseball bat, and robs a skate shop. The video also features a punchy performance of the track. As the band jumps around, it’s clear they’re having much more fun than any of their haters.

You can check out the video below and pre-order the album here. Catbite just announced their summer/fall 2021 tour, which now includes an album release party for Nice One at PhilaMOCA on Friday, August 6th. The awesome Doylestown-area riot grrrl-inspired trio Froggy opens the show (listen to their debut EP Sopa de Elote here) along with their tourmates The Best of the Worst. Get tickets and more information here, check out the full tour schedule (and the “Call Your Bluff” video) below, and find the latest in local live music news at the XPN Concert Calendar.