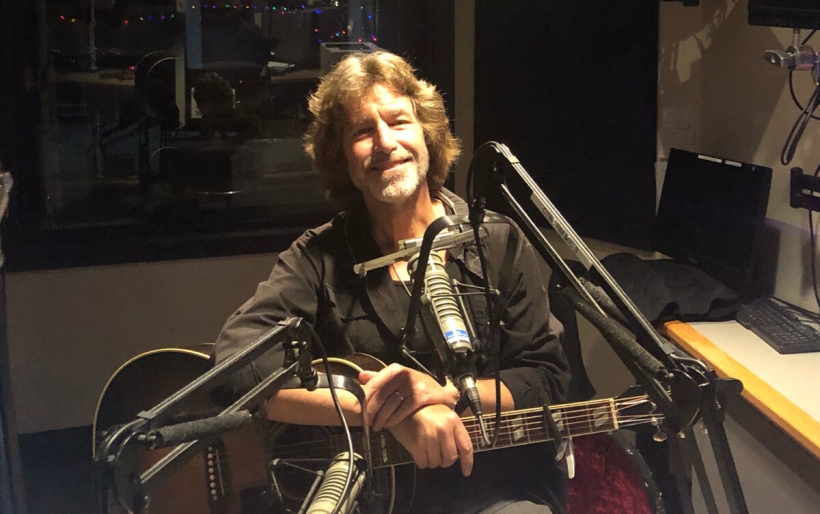 John Flynn has been a staple of the Philly regional singer-songwriter community for going on three decades, and just released his newest album Wild Beat The Wings. Last Tuesday, July 13th, Flynn appeared on the air with Helen Leicht for a performance and conversation on the XPN Local Show.

Flynn was the first on-air guest Leicht has had join her since the pre-COVID times, and they talked about the new album, the gig Flynn has lined up to host Philadelphia Folk Festivals pocket-sized edition next month — more information here — and of course the Musicians On Call program, of which Flynn was a charter volunteer.

He also performed two songs live and acoustic — the new “Circle of Love” and the old “Vintage” — and surprised Helen with a studio recording of a brand new song he’d written about her called “Girl With The Blue Transistor.” As Helen has spoken about in interviews, like this one on the 25 O’Clock Podcast, she went to sleep listening to the music on a blue transistor radio under her pillow, waiting to hear the next Beatles song. Appropriately enough, they close by listening to Flynn’s version of “And Your Bird Can Sing,” which appears on Wild Beat The Wings.

Listen below, and tune in tonight for Helen’s next guest on XPN Local — Mutlu, who will also play live and talk Musicians On Call. Tune in tonight, July 20th, at 8 p.m. ET on 88.5 FM in Philly or streaming online at XPN.org.