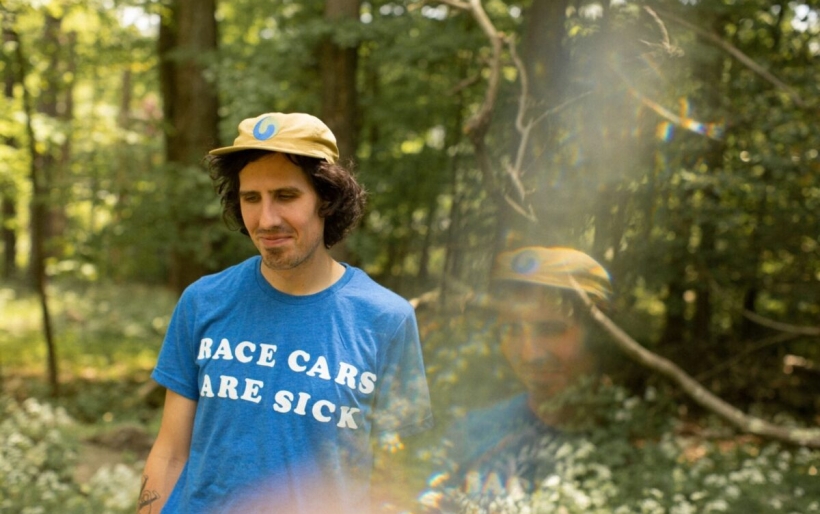 Golden Apples’ new album Shadowland predictably finds frontman Russell Edling in sort of a dark place. Written mostly in lockdown, Edling was confronted with recent personal tragedy and the large-scale tragedy of a global pandemic, and he zeroed in on that depression while composing. “There are moments where I thought, ‘Maybe I’m not going to make music anymore,’” he told The Key over Zoom from a friend’s home in Port Richmond. “Everything has felt so up in the air for so long that it’s kind of weird to be doing something that feels almost normal.” Out of that time, though, he created Golden Apples’ first album under a new moniker (previously named Cherry, which he changed to avoid confusion with other bands with similar names).

The album is a sprawling ode to the indie rock Edling listened to as a high-schooler, with nods at cassette-tape lo-fi and acoustic bedroom rock, but also rock anthems that recall weirdos big and small – David Bowie and Spirit of the Beehive wrapped in one. He talks with The Key about how writing this album really came from a place of nostalgia, quite literally at times.

The Key: Your new album is named Shadowland, and it was recorded at home. Can I ask you a little bit about your recording setup? Where do you sit? Where do you write?

Russell Edling: I started recording some stuff right before everything happened with the virus and the world kind of shut down. So I had recorded three drum takes for three songs [“Garbage” and “Futureperfect” and “Return to Shadowland,”] that I recorded at my practice space here in Philly. And my friend Pat Conaboy, who I’ve been friends with for a long time and used to play in a band we were in years ago [Kite Party], he did drums for three of the songs and I was starting to work on this project, and then everything shut down. So I just loaded up my car, filled it with gear, and drove back to my parents’ house in northeastern Pennsylvania and recorded the rest of it there. So I was recording it in my high school bedroom.

There is still goofy stuff hanging up on the walls from when I was in high school and I had completely emptied everything out and just put all this gear in there; there’s like a drum set in the room and mixing board. I had never played drums before or anything. And then in June, I think, I went back to Philly and then finished tracking everything, just like overdubs, like guitars and some some backup vocals and stuff like that at my house, in my basement in Fishtown. So I had some friends helping me out with some of that stuff.

TK: You’re back at home and you’re in your high school bedroom and you have a drum kit set up in there. I mean, how did your parents feel about that? Were they living in the same house at the time?

RE: They were. It’s kind of amazing, like they didn’t care at all. They would go to bed and I would play drums until 2:00 in the morning, and the first thing I’d say in the morning is, “So sorry if I kept you up,” and they were like, “Nope! Didn’t hear a thing, we don’t care, it’s all good.” They were so supportive of it. And I think they were grateful that I was around. And I was certainly grateful to be able to hang out with them. And I think it was really nice for both parties to be able to just do that. But I do enormously appreciate their patience with me making all sorts of noises all the time up there.

TK: I was wondering about when you mentioned being able to get back into Philly, back into Fishtown, and you were able to record some more tracks with friends and contributors on this album. Did they record your place or how did it work? Did they record separately and then send you what they tracked?

RE: Yeah, in some instances. There’s some guitar solos on the song “Forever Hollow,” and that’s Tim Jordan, who is in a band called Sun Organ, who was also in my old band with Pat. He recorded those guitar tracks and just emailed them to me and then I put them into the song. And then for almost all the songs, there are overdubs, like guitar parts and vocal parts and keyboard parts by Mimi Gallagher and Matt Scheuermann, who were living with me at the time. So we would just go down to the basement and just record stuff and play around like the guitar, the guitar tracks on the song “Return to Shadowland,” Matt did. I just texted him, I was like, “Can you come down for a second and play something on this song?” And he came down and I played him the song and I was like, “I just want to have like a crazy, Nirvana-y kind-of guitar solo thing.” So he just listened to it and just played over top of it a few times. And then we just stopped doing takes because we felt like by the time he knew what he was really going to play, it wouldn’t be as naive and as interesting anymore. So what you hear on the record is pretty much like the first thing that he did after listening to the song. Which, just having access to people like that who are so talented and collaborative was really great.

TK: Did you have any other influences for this album?

RE: For most of 2020, I found it really difficult to listen to new music. I was just really kind of overwhelmed by new information. Just, there was no more space for new music. So I was digging through stuff that I had listened to when I was in high school, for some reason. I guess because I was back in that high school space. But I was listening to The Microphones and Pavement, your kind of classic indie rock sort of stuff. I graduated high school in 2007, so Mid-2000s Indie rock is definitely high on my priority list there, but I think that I wasn’t trying to go for anything specifically. I think it was more just working with what I had and doing a sort of bedroom recording. It just lent itself to a lot of acoustic guitars and a lot of sort of scrappier sounding stuff, which I’ve always admired, you know, especially if you think about The Microphones or Mount Eerie, those sorts of handmade records, that sound I’ve always gravitated toward.

TK: I want to talk about one song in particular, “Tamara Lee.” What’s it about?

RE: The story of that song is kind of about the person not really feeling like they belong in their own domestic situation. I think that a lot of kids endure a lot of strange trauma that shaped them as they grow up. I feel like I was inspired a little bit by Cat Power for that song. She has a song called “Names,” and the song just kind of chronicles all these people, and through listening to that song, you just get this sense of, like, these children are kind of being put in these crazy situations…and they’re kids. And that’s just a wild reality of life. I think I was trying to sort of channel that, but imagine it in a situation where a kid discovers a gun and the gun goes off accidentally and I’m not even sure really what the effect of the gun going off is.

TK: So tell me about the name Shadowland. Like, what does that mean for you?

RE: I think Shadowland occurred to me on a particularly gloomy day. I think Shadowland in my head represents just the world of chronic depression and just being unable to escape that feeling. And so I think that in a lot of ways that’s just how I’ve interpreted it. I think that, also, for me, the last year and a half has been a lot of trying to find safety, trying to find what feels like a safe space, and in a way like I think shadows can maybe feel comforting, like if you’re in a cave, if you’re under some sort of shelter, perhaps you’re in the shadow of something. And I like thinking about it in those different ways, that there is a sort of a cliche, like “shadow AKA depression.” But there’s also the shelter of a shadow and the comfort there, which I think is also, to be honest, something that I think about with depression, sort of like the comfort of feeling that way sometimes, where it’s like, “Well, at least I have this feeling, at least it’s like a companion throughout your life.”

Golden Apples’ Shadowland is out today via Lame-O Records; order a copy hereand stream the album below.