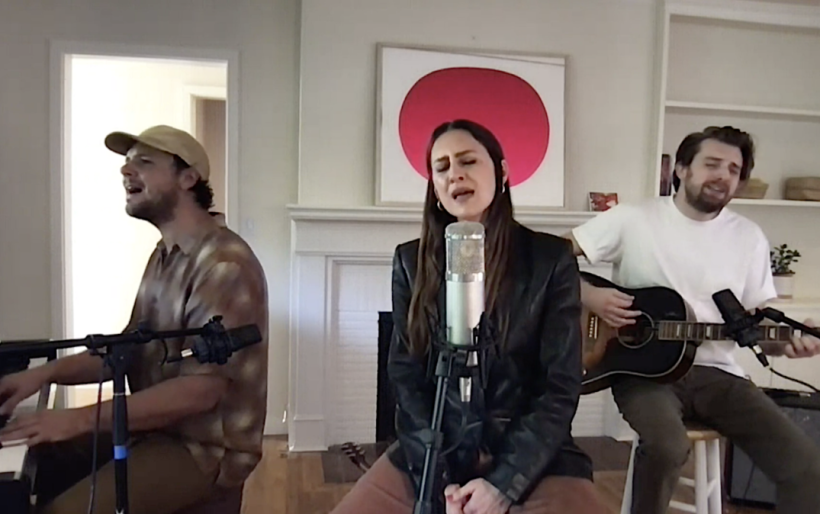 From the cozy confines of their Los Angeles living room, the indie pop band HAERTS appeared in a dreamy acoustic trio configuration for today’s virtual Free at Noon performance, channeling their inner Mazzy Star for a short five-song set.

The performance showcased the new HAERTS album Dream Nation, released back in May. The opening “Drift Away” exchanged the big beats and rising pop chorus of the album version for something more solitary and Cowboy Junkies-esque. “Shivering” was even more hushed, but ringing with urgency as vocalist Nini Fabi repeated “You’ve got to let me go, you’ve got to let me go” at the song’s conclusion.

“Come Back” was a slow acoustic strummer with a piano accompaniment by Ben Gebert reminiscent of Cat Power. The pensive song found Fabi ruminating on the conundrum of identity: “if you wanna be somebody / you gotta be someody else.”

This led into the Lone Bellow-esque Americana harmonies of the rousing “It’s Too Late”; “we wrote this in New Orleans, where we recorded [the album],” Fabi said. “It became a really special song for us as a band.” The set closed with “Hope,” one of HAERTS’ oldest songs, of which she said “we’ve been playing it for so many years, but never in this acoustic live setting.”

Watch HAERTS’ virtual Free at Noon performance below, and listen to Dream Nationhere. Check out the Free at Noon archives here.