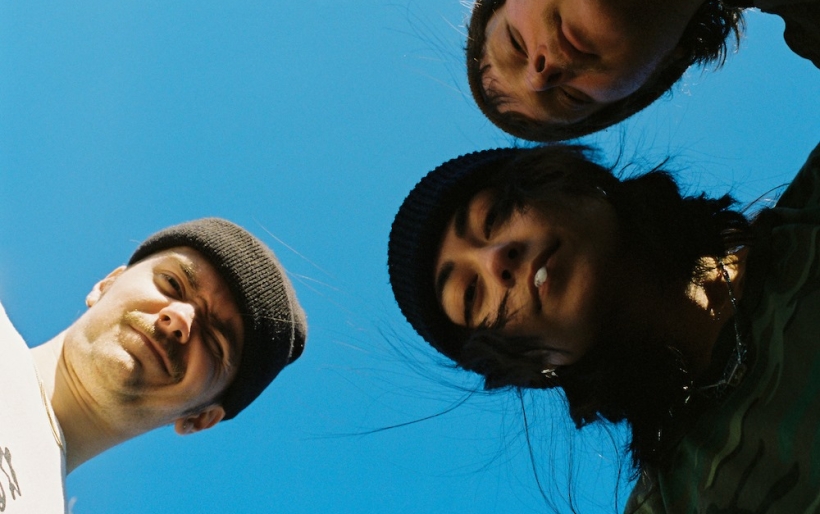 Spirit of the Beehive | courtesy of the artist

Spirit of the Beehive aren’t sure why people think they’re so mysterious. Despite only having a few published interviews, cryptic lyrics, and a scarce social media presence, they’re perplexed at the secrecy most people associate with their band. Ready to demystify themselves over some McDonalds, we sat down last month for a half-hungover discussion about death, the entertainment industry, and opening for Swirlies.

After meeting at Urban Outfitters in 2014, Zack Schwartz and Rivka Ravede decided to start making music together. From the get-go they had one goal: “we just wanted to be loud as shit,” Ravede explained. With an ever-changing line-up, they started making the rounds in the Philly DIY scene. Through their first two releases, The Spirit of the Beehive and YOU ARE ARRIVED (but you’ve been cheated), they garnered a bit of a cult following. It was 2019’s Hypnic Jerks, however, that was the real gamechanger. Totally transfixing, their glitchy electronic soundscapes quickly cemented their status as your favorite band’s favorite band.

At the start of quarantine, Kyle Laganella and Pat Conaboy left, and multi-instrumentalist Corey Wichlin, who had joined shortly after the release of Hypnic Jerks, stepped in to complete the line-up. Faced with a global pandemic and endless amounts of time, they started working on what would become their fourth album, and their Saddle Creek Records debut: ENTERTAINMENT, DEATH. Separated due to social distancing, the band shuffled files back and forth via email, adding obscure samples ripped from Youtube and old video games. “With unlimited time, it’s hard to know when to stop,” Whiclin said.

The outcome of bleak nights spent recording in a basement surrounded by rusty tools, intense paranoia, and the anxiety of 2020, ENTERTAINMENT, DEATH is a 40-minute existential crisis. Starting with “Entertainment,” the band gives a vague account of a near-death experience from tour when their tire blew out on the highway.

“I think the general idea was us trying to write a record about how people are pumping out content and creative work, and then once it’s done….Death of the body, death of the mind,” Schwartz said.

Spending months mulling over their own mortality, it’s something the band is more than comfortable confronting. “I come to terms with my mortality like on the hour,” Ravede joked. It seems like the general consensus is that they don’t fear whatever comes next, they’re actually pretty excited. For Schwartz, he’s fairly confident he’s crossed over to the other side once after a couple of double whippets. He claims that the afterlife looks like the bottom of a burrito and everyone is a Minecraft character.

These oddly specific images are what make Spirit of the Beehive so captivating. Sometimes it’s unclear if their visions are the product of possession or they’re modern-day prophets trying to preach a warped reality. All three members share songwriting and singing responsibilities, but it sounds more like their lyrics from the subconscious, or some otherworldly entity.

“There’s Nothing You Can’t Do” is probably the most paranoid song on the album. “I honestly don’t know where most of the ideas that my lyrics come from because they’re just kind of coming from a stream of consciousness,” Ravede said. “That one was like the dancey track. I said in another interview it was like slowly becoming more paranoid from a carbon-monoxide leak.”

A jarring journey through all the morbid scenarios that come to mind when we ask what happens when we die, the album comes full circle with “Death.” The last song that was written for the record, Schwartz said it felt like a bookend. Despite finding some sense of finality, it’s clear that their lifetime obsession with the unknown isn’t going anywhere.

“I’m more interested in the idea of creating a body of work before you die,” Wichlin said. “Or trying to create this thing that you leave behind. That’s always been a driving force for my creative output. Having something that I’ve put a lot of time and energy into, which will last, not forever, but after I’m gone.”

While the band says they still feel foggy as ever, they’re ready to move on from the ENTERTAINMENT, DEATH era. Recently building a studio and practice space in a warehouse, they’re currently working on another record which they plan to self-produce.

Spirit of the Beehivewill also be opening for Japanese Breakfast at two of their five Union Transfer shows. While they have to go back and learn how to play the songs from their latest album live, they’re looking forward to the reunion.

“We actually played our first show with Michelle’s last band, Little Big League,” Ravede said. “Which was the first show I ever played, if you don’t count like my bat mitzvah, which I do not. She was really nice to me. She was like ‘you can do it!’” The first show is sold out, but tickets are still available for the August 11 show here. You can also stream Entertainment, Death below.