All Lanes Go: Great Time's Jill Ryan on trusting, believing in, and loving yourself on 'Sounds Like___ Vol. 2' - WXPN 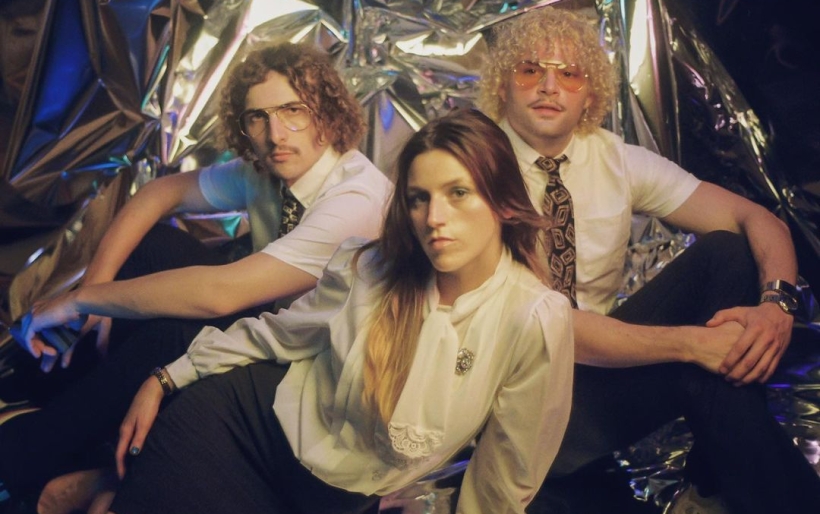 All Lanes Go: Great Time’s Jill Ryan on trusting, believing in, and loving yourself on ‘Sounds Like___ Vol. 2’

The series of EP’s finds the band switching up their sound for each release, and their second volume — out today — sees them dive into the electro-pop and funk realm. Featuring visceral synths, groovy beats, and velvety vocals, it sounds nothing like their past releases, and that’s the point.

I spoke to Jill about self-doubt, The Shins, and playing this year’s XPoNential Music Festival.

The Key: This EP is the second in the Sounds Like___ series. Why did you want to do a series of releases instead of an album?

Jill Ryan: We released our debut album in 2018 called Great Album, and that was a 14-track record with a bunch of different styles on it, because we’re influenced by a lot of different genres, sounds, and artists. That’s sort of reflected in the music we make. We put it out, and some of the critiques or comments that we got on it were, “oh Great Time is finding their sound. What lane are they going to choose? They really need to pick a lane. Cool exploring here.” That kind of vibe. We were like oh? This is sort of our lane, doing whatever and doing an eclectic mix of things.

We put out some singles since then with a sort of a funkier vibe that I think we were just feeling in the moment. Then we had a collection of songs that we were starting to work on, and we were figuring out how we should put them out. We were like, “if we were to pick genres and lump them together that way, how would we do that?” Our initial idea was like we’ll have a funky EP, an electronic EP, an acoustic EP, a really thrashy punky EP. It sort of follows that line at least a little bit, but this is only the second one. I’d say it’s more on the electronic vibe, but we have more volumes to come, and they are definitely in different styles.

TK: What do you like about experimenting and exploring other genres?

JR: I don’t know why, but everyone has these pulls to what they like. Whether it’s connecting with the lyrics or a sound that elicits a certain feeling inside: like the timbre of a sound, or whether it’s major or minor, or has different chord harmonic qualities or textures. I’m drawn to what I’m drawn to, partially based on my adolescence and what I connected to during that developmental stage of my life. I think the three of us are drawn to sounds that make us feel a certain way and are different and not just super simple or predictable. Although we do like simple and predictable at times too.

TK: What are some of the sounds that you were initially drawn to?

JR: The three of us have different influences, but there’s this crossover of artists, sounds, and genres that we do like, and that always comes out when we’re creating music. I grew up on the indie-rock alternative rock stuff like Bloc Party, The Yeah Yeah Yeahs, The Shins, The Bravery, Incubus, Coldplay, that sort of thing. Then I got really into R&B and neo-soul: Erykah Badu and D’Angelo. Then I sort of crossed over into jazz, and I think those artists, genres, and styles that I just mentioned, the three of us have those in common with a few fringe artists. I was never really into Primus, but Zack, our bassist, was really into Primus. Donnie was into some other artists that I wasn’t necessarily into, but the crossover is where we meet. It’s that alternative rock indie-pop funky Stevie Wonder Motown, jazz, neo-soul, electronic Little Dragon thing where we all come together.

TK: This release explores some of the self-doubt and anxiety that comes with being a creative. Why was that something you wanted to write about?

JR: The last year and a half has been very challenging for everyone. Songwriting and lyric writing for me, and for many others I’m sure, is just a stream of consciousness. I just kind of let it rip and write it out, and then it almost starts to make sense after the fact. It’s hard being a creative person that wants to go against traditional career paths. You really have to trust yourself and love yourself and believe in yourself, and a lot of times, you don’t. It’s just like this frustrating battle with yourself to be like, no, I’m here, and I’m making things, and I’m saying what I feel, and the hope is someone else can hear it and know they’re not alone.

It’s also a way for me to put it out in the universe. I always think back to this music and mind course in college and in therapy, they talk about when you address your fear or your anxiety, and you don’t push it away. Instead, you actively say I’m feeling scared, or I’m feeling nervous. Not I’m fine, I’m fine. When you actively address how you feel and you work through that feeling, you can overcome your fear. Songwriting is that for me. I’m going to put all my crap out on the page, and I’m just going to work through it. A lot of the songs are about how I feel insecure a lot of the time, and this is just sort of the way I’m wired. Other songs are like, yes that is true, but I’m going to keep going, and I’m going to be confident and love myself.

TK: This EP was written over quarantine. Do you think that the seemingly endless amounts of time you had to work on it magnified any of that anxiety or self-doubt?

JR: Totally, yeah. I’m already that type of person. Before the pandemic, I was very like what am I doing? How did I come across? There’s this meme of someone laying in bed at the end of the night, and they’re trying to fall asleep. The next slide is like all the shoulda coulda woulda situations kind of thing. With extra time to sit and reflect, we all individually and collectively learned a lot about who we are, and what our values and morals are, and how we want to show up for ourselves as individuals and people as a band and in the world.

TK: Sounds Like____ was recorded in the home studio that you guys built. What was that process like?

JR: We all went to school in New York at The New School. Every weekend we would take the bus into Philly and the train to the studio and record very very DIY in our drummer’s garage area. We were here all the time in college, and once we graduated, it was a no-brainer, like, oh, we’re going to move here, and let’s build this a little bit more professionally and go all in. We were really fortunate to have 300 or so backers to help support the project. I have so much more appreciation for what goes into building walls and what’s behind drywall and wiring. You have to really plan where your outlets are and where the cables are running. Which is all part of what it takes to build a soundproof and acoustically sound studio. That was probably the best experience.

I think lifting up the drywall and putting the drywall on the ceiling…I was like, “wow! This is so cool! We did it all ourselves.” We had one contractor that helped us, he was awesome, he was so cool, Jeff. He was into good music. He was playing Little Dragon on the radio while he was working with us we were like yeah! We actually went to a Little Dragon show together at Underground Arts, which was funny. I think that working together and doing a big project together all on our own and making a ton of mistakes together as a band in the physical sense of like cutting wood wrong or making too many holes in the wall and having to repair them really helped us grow together and learn more about what it takes to work together. We’re still figuring that out, but yeah.

TK: You guys are going to be playing The XPoNential Music Festival this year! How are you feeling about that?

JR: So excited! I’m very very excited! I’m super grateful that XPN and the Philadelphia music community have welcomed us as much as they have. I’m just excited to play a big show. I love that it’s outside, and hopefully people will be feeling safe about that. I’m just really pumped to play the new songs and of course, some of the older songs. There’s nothing like playing the music you spent so long working on for people.

TK: What have you missed the most about live music?

JR: It’s different going to a show as an audience participant as opposed to a performer. In terms of going to a show, the feeling that you get when someone else is sharing themselves with you and the vibrations of the sound that you physically feel, and the energy of the people around you. It’s unmatched it just feels so good. I know people are really excited to feel that feeling. I am.

Performing, similarly the vibrations, the energy of the people that are there to share in the experience of music-making on and off stage. The rawness of a live performance. We’re so used to making things in the studio, and we love doing that, but there’s something really human about doing it live. I love when audience members are receptive of that and are there for the energy and the connection.

You can stream Great Time’s Sounds Like___ Volume 2 below and grab tickets to The XPoNential Music Festival here.