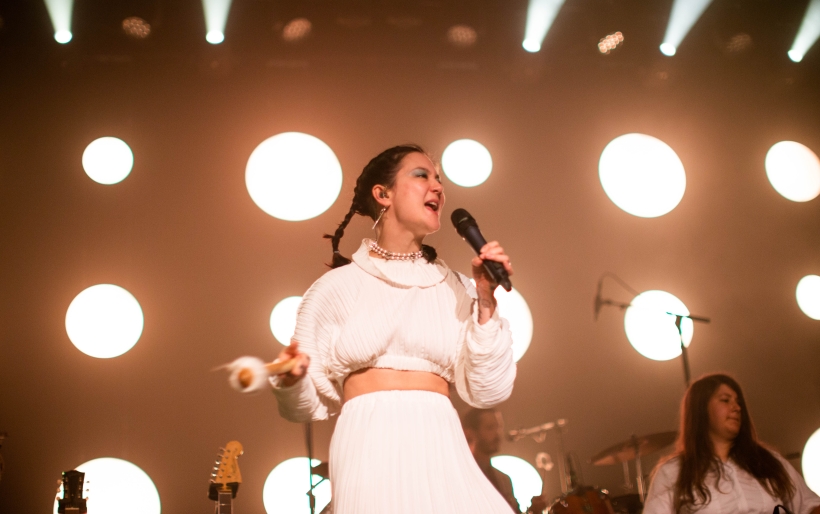 “I’ve gotta be honest with you guys,” Michelle Zauner said to a packed Union Transfer on Saturday, “This is already spicier than the Friday night crowd.”

We won’t wade too deeply into the which-crowd-was-the-best debate of Japanese Breakfast‘s historic five-night homecoming run, but some gig-to-gig nuance make sense. Saturday was the first show to get announced and first to sell out, so it pulled the JBrekkie devotees who pounced to get tickets. The Friday night excitement was equally centered around it being the first show back at the beloved Spring Garden Street venue; last night’s energy came from it being an audience so hype to see concerts again that they packed the place on a Sunday.

What do the remaining two shows hold? We can all hear firsthand when Japanese Breakfast’s grand finale is broadcast on WXPN on Wednesday night. But more on that later.

First, Saturday’s show, which was ultimately a testament to roots, friendships, and family across the board — during Mannequin Pussy‘s explosive opening set, bassist Bear Regisford sent “Pigs Is Pigs” out to his parents who were watching from the stage right riser, then dove into the trench to work the outstretched hands of the front row. Mannequin Pussy and Japanese Breakfast are old friends with shared bills going back beyond the Everybody Hits batting cages, and the band’s bottled-up, cathartic performance was as moving as it was when we heard it in Millersville the weekend before. This particular crowd maybe needed a bit of winning over (a testament to how much Japanese Breakfast’s career has stratospherically soared beyond its Philly roots), but between the explosive group scream — a moment of punk mindfulness frontperson Missy Dabice leads at every show — and the emotive closing of “In Love Again,” it’s safe to say there were converts aplenty. Mannequin Pussy returns to the Union Transfer stage to headline on October 29th.

Japanese Breakfast took the stage in near-orchestral form, aglow in amber lights, opening the same way their acclaimed new album Jubilee opens — the swelling, sublime “Paprika” heading into the celebratory banger “Be Sweet” — and proceeded to play almost the entire album, almost entirely in order, sounding (and looking) bigger than ever.

In addition to the core band of Zauner, guitarist / keyboardist Peter Bradley, bassist Deven Craige, and drummer Craig Hendrix, JBrekkie 3.0 is augmented by Ohmme’s Macie Stewart on violin, and West Philly’s Eliza Hardy Jones on keyboards, with an all-Philly horn section — Jill Ryan of Great Time on saxophone, Koof Ibi Umoren on trumpet, and St. Clair Simons on trombone — picked out specifically for these shows. For “Paprika,” Mannequin Pussy’s Kaleen Reading joined to play a marching snare beat while Zauner accentuated the chorus with gong hits, and it sounded magnificent. When the ensemble returned later on, Zauner said “I’m grateful to Philadelphia for being a city that fostered such amazing music, and such wonderful friendships.”

One friendship in particular got a lot of love: Hendrix, whose tenure working with Zauner stretches back to her old band Little Big League (he produced their music beginning with 2013’s These Are Good People), and whose parents were also in attendance. Zauner credited him with crafting the Bill Withers-esque vibe of Jubilee‘s contemplative groover “Tactics,” led the crowd in several “CRAIG! CRAIG! CRAIG!” chants.

“His parents Bill and Linda are here, they just celebrated their 52nd wedding anniversary,” Zauner said, turning to Hendrix to continue her thoughts. “I’ve become such a better musician because of you. We all have. We love you very much and don’t say it enough.” Taking it into the yearning “Boyish” from Japanese Breakfast’s Soft Sounds from Another Planet (originally appearing many years prior in her old band’s Tropical Jinx LP), she said “When we were in Little Big League, this song really sucked, and you made it into something beautiful. This is a song about wanting to be more.”

Another moment of this was when Zauner stopped the show to bring Union Transfer’s Sean Agnew onstage for a hug, a selfie, and some memories. She told the story, as she often tells at Philly shows, of how she used to work at the venue, starting off in coat check and concessions. “I didn’t even really have the ambition at that time to be like ‘that’ll be me one day,'” she said. ” I was just like, “I want to work at a cool venue.” A new wrinkle to the tale that we’ve never heard before: Zauner said somebody once paid for a $1 pretzel with what turned out to be a fake $100 bill, and she gave them $99 in actual change. The shift manager said it had to come out of her check, but “Sean, my boss, paid it off for me. And now we’ve paid him back by playing five sold-out shows at Union Transfer!”

As the set rolled on, more favorites from Soft Sounds and Psychopomp appeared — including the most dynamic, chilling performance we’ve heard of “The Body Is A Blade,” punctuated by Craige stomping at the edge of the stage — and before an encore of Jubilee‘s beautiful “Posing For Cars,” Zauner gave one more dedication: to Bradley, her guitarist and husband, and to his parents Fran and Joe, also watching from the riser. “My whole life fell apart six years ago,” she said, nodding to the passing of her mother Chongmi, detailed in Zauner’s bestselling memoir Crying in H Mart. “I’m lucky to have you as a family, I’m so grateful to know you, truly. I’m grateful for the man that you raised, and brought into my life, he kept me alive, truly.”

It was an emotional capstone to an emotional night, and we can’t wait to hear the remaining shows. Japanese Breakfast’s final Union Transfer concert on Wednesday will be broadcast live on WXPN — 88.5 FM on the radio in Philadelphia, or streaming live worldwide at XPN.org — and we totally hope that the venue marks this record-breaking run with a sports jersey of some sort hanging from the rafters.

Below, check out the setlist and photos from the show by The Key’s Rachel Del Sordo.

Setlist
Paprika
Be Sweet
Kokomo, IN
Slide Tackle
Posing in Bondage
Savage Good Boy
Tactics
In Heaven
The Woman That Loves You
Road Head
Ballad 0
Boyish
The Body Is A Blade
Everybody Wants To Love You