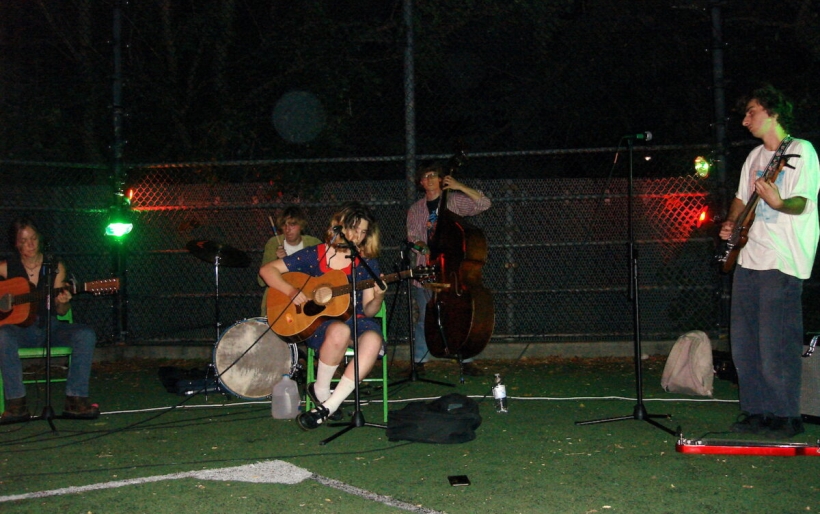 Florry’s Francie Medosch on finding her niche with ‘Big Fall’

It’s move night in South Philly. Francie Medosch and her friends are getting ready to have some drinks and watch Wild Hogs, a 2007 comedy featuring John Travolta and William H. Macy, about a few middle-aged men that go on a motorcycle trip to break up the monotony of their daily lives. “It’s not a good movie,” Medosch says through a short laugh over the phone. “But it’s one I thought of the other day. I love shitty movies, it’s the most entertaining form of media for me.”

Next month Medosch will be releasing the heavily folk-inflected Big Fall, her second full-length album under her full-band moniker Florry. Three years have passed since Florry released their first album cloud-covered Brown Bunny. Over that time, she started college and writing for Florry slowed down, which allowed her to focus on herself for a while.

Medosch started playing in a punk band, experimenting with strange tunings, focusing on riot grrrl era punk rock and “trying to sound like Sonic Youth,” as she described it. While it was relatively short-lived – maybe six months – Medosch found it to be for the best, as it set her original project down a new path.

“That break really saved Florry for me,” she says. “I was getting really sick of playing the songs we had. I started writing those songs for Oh You Vacation Time and Big Fall, and I was like, ‘Oh, this is already starting to sound better.’ But I could tell I was headed towards a really good thing and I was really excited.”

That shift fully manifested itself with 2020’s delicate, yet folksy Oh You Vacation Time EP. Now 20 years old, the Florry frontperson started actively working on her outlook during towards her junior and senior years of high school. According to Medosch, simply being aware of herself enough to continually per herself out there, talk to people, keep a smile on her face and not turn people away made all the difference. Having climbed out of that depressive state that fueled the despondency of Brown Bunny, Medosch harnessed her new perspective and let it show in her latest work.

But when the COVID-19 pandemic took hold of the nation, Medosch wasn’t sure what would happen with Florry. Her drummer from the Brown Bunny sessions lived in New York and she felt it was time to move forward with where her writing was clearly taking her.

Honing her longtime love of country music, Medosch was able to veer from lo-fi alt-rock to more along the lines of alt-country in the cosmic sense on Big Fall. At a young age she picked up Of Rivers and Religion by John Fahey and started getting herself acclimated with slide guitar playing. Coincidentally, “Dream Diary / Growth,” which features slide guitar most prominently on Big Fall, is one of four tracks on the album Medosch wrote during Florry’s earlier, darker days sometime between the ages of 16 and 18. The others include the reflective and bird-like whistling “Jane,” the guitar-ripping “Older Girlfriend,” and “Lovely,” a ponderous flat-lining song that takes the actually ends the album on a low note not found on much of the songs before it.

“It’s very weird listening to those songs now,” Medosch says. “They’re very confusing to listen to, I was very emotional at that time. But the other songs I wrote when I was 19 going into 20. I wrote most of the six [other] songs during the pandemic and recorded them during the pandemic.”

Medosch says she also got “re-obsessed” with Neil Young over the time of the pandemic lockdown and it shows with lap steel guitar highlights and a mid-tempo strut on Big Fall’s opening “You Don’t Know.” The open tunings and finger-picking techniques she uses may have been influenced by John Fahey a long time ago, but they sound natural to her on the comforting “Drivin,’” and thoughtful “Animals.”

Florry may have Big Fall ready to hit the street in the coming weeks — it releases digitally on on August 27th — but Medosch says she and her band are already working on an album that’s upwards of an hour long, adding that she’s “on a creative high right now.”

Whether Florry will be continue to twang and stomp is yet to be determined, but it’s probably safe to say Medosch has found her niche, much like she and her friends have in B-list movies with over-the-hill actors on week nights.

“Music is so important to me and I use it to get through stuff,” Medosch says. “So, when I was writing music that’s sad, it was also making me sad. For a little bit it was helping me. But at this point I’m a pretty sound person.”

Florry plays an all-ages show at PhilaMOCA on Thursday, August 11th with Karl Blau and Friendship; tickets are available here. Big Fall is out digitally on August 27th, and can be pre-ordered here.