Twin Pixie are the spirited soundtrack to strange days - WXPN 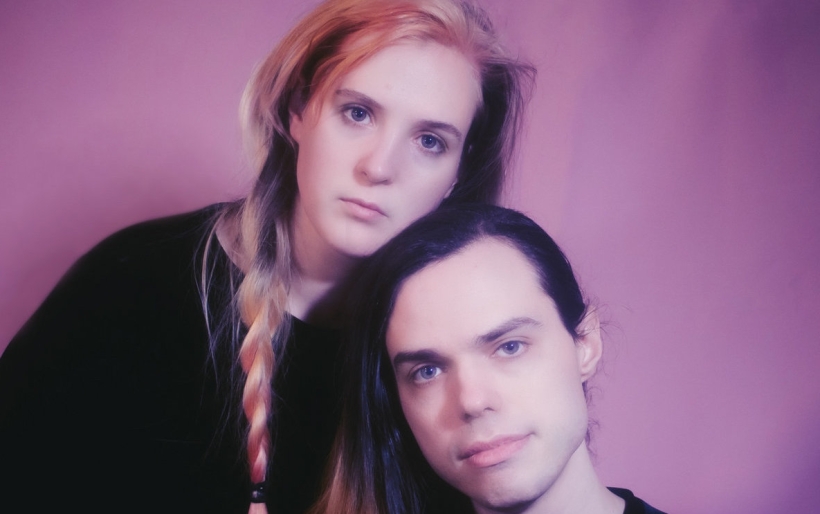 Twin Pixie are the spirited soundtrack to strange days

Sweetly nestled in the sonic cosmos of shimmering dance music, Twin Pixie are a two-person band that responds to the pop sensibilities of the genre with a charged, esoteric air. Their aesthetic is part Casio-spliced electro-infused pop beats and part elf, a formula they’ve worked, so far, into magic via three songs currently setting off glitter bombs on Bandcamp and Spotify. From the fun and frenetic “Lunacy”, to the more hypnotic “Astrology” and finally, the rousing, defiant anthemic vibes of “Firestarter”, Twin Pixie’s sound reverberates with a common trait throughout each song: the insistence on moving bodies as well as minds.

In the current climate, where art and music are called upon to deliver both an answer to societal ills in  the chaos of a post-Trump, COVID-drenched world, as well as a relief from said world, the Philly-to-Montreal-to-Philly tech-rockers are poised to deliver future beats for the strange days to come. We sat down with Twin Pixie and discuss dance music, the powerful potential of a return to the live experience, and the importance of maintaining our magical, spirited edge in the face of an ever changing, amorphous universe.

The Key: So, who are Twin Pixie as individuals? How did you meet and what was the catalyst for the band?

TJ: I’m TJ (they/them). I suppose I’m a cat trapped in a human body. I’m still figuring that out. Creatively I draw inspiration from patterns of human emotions, especially in their rawest states. I’m interested in exploring ways to invoke something tangible through sounds, which are not tangible. I love sound design, and creative experiences that don’t have concrete conclusions. Lately I’ve been thinking about children’s dolls and the ways in which plants sprout. I typically don’t enjoy words or lyrics, but Aiv is the only person I’ve met whose lyrics interest me. I hate rules.

Aiv: I’m Aiv (she/her)! I’m obsessed with things like archaic medical texts that blur the line between medicine and superstition, the ideologies of alchemists and alchemy, and historical writings on the existence of witches and their habits. Most recently I’ve been thinking a lot about urban decay and the ways that we tend to and maintain the places we inhabit. I suppose that some of these things find their way into our lyrics on occasion.

TJ: Our ‘roles’ in Twin Pixie are mostly blurred, but I sing a majority of vocals, Aiv is our main lyric writer, we both play synths and samplers, and we co-produce all our music.

Aiv and I met at graduate school in Montreal a few years ago, where we both studied classical music. The culture surrounding classical work and academia had been wearing on us for years in unhealthy ways, so we bonded over that and our interest in the electronic medium. We started teaching ourselves and each other how to record and produce, and performed some electronic ritualistic seance performance art. We listened to Carly Rae Jepsen and Pharmakon. We went to see punk shows at bars in Montreal. Then we dropped out of school and moved to Philadelphia.

I think we were also both in dire need of a safe space to openly express our weirdness and queerness, as there wasn’t a space we knew of that existed within classical culture. That togetherness of need turned into the creative space that is now Twin Pixie.

TK: You’re originally from Montreal– how has the transition to Philadelphia been?

TJ: We’re actually not originally from Montreal, it’s just where we formed. I’m from Atlanta, Georgia; Aiv is from Columbus, Ohio. I did my undergrad here and lived in Philly for 5 years before Montreal. I was not at all involved in Philly’s DIY scene, even though I was interested in it, but school and work kept me incredibly busy. I loved how weird and stubborn Philly was, and I must’ve talked fondly about it to Aiv who had never lived here.

TK:  What are the main differences in the music scene? Did COVID slow down your transition — if so, how? What drew you to settle here and how has Philly impacted your approach to music, art and activism?

TJ: We moved to Philly about a year and a half before the pandemic, but were quite reclusive and were both struggling with our mental health and personal lives during that time. We didn’t go out often and missed opportunities to interact within Philly’s creative spaces. So, we’ve been around, but in hiding. Since we’re just getting to know the scene in person for the first time, it hasn’t impacted our creative approaches yet, but we’ll be interested to see how Philly impacts our growth from now on.

If anything, the lockdown allowed us to heal and took away certain social pressures of being a performing act. Our comfort zone is being behind-the-scenes, even though we’re ready to push ourselves onto the stage soon.

TK: When you create live, how different is that to the recording process? Are their differences in equipment or gear used? The snippets of live performances on your Instagram show that you’re very much an electronic band that values live instrumentation to a degree — can you elaborate on how important having a tactile experience with your equipment guides and empowers your live show, your recording process?

Aiv: We very consciously approach writing and recording songs separately from live performance because we really want to feel unrestricted in what we put into our songs without worrying about whether or not it is something we can do in the context of a live show. The flip side of this too is also very exciting for us: when we begin to work on how a song might sound live, we tend to try to push it even further, find ways to invigorate the song, and work in some extra special moments for us to embrace the fleeting qualities of live performance.

TJ: We also want to make sure that our live shows are not karaoke performances of singing against a backtrack, or us just buried behind our gear. It’s been tricky to find that balance of interacting with electronics while creating a setup that feels organic to play and to watch. But it’s coming together, and we’ve got some fun mischief planned for our shows.

TK: On “Firestarter”, the lyrics evoke this sort of ghostly, otherworldly aesthetic. How important is that for LGBT folks, femme folks, to reclaim their witchy nature? Particularly, the lines “ Call me a sick girl, call me an evil girl / When you know that you did it worse / I will destroy you, that’s a promise / Now watch me kill your curse” seems like a witch revenge concept. What was the inspiration behind those lines? Is there a connection between pop music, especially pop music from women, femmes and LGBT folks and witchiness and magic? If so, what is that connection?

Aiv: It feels difficult to make blanket statements about witchiness and the LGBT community, or about the relationship between womanhood and witchiness. For the two of us, it’s simply that we personally and directly connect with aspects of witchcraft. I guess it feels important for us to explore those aspects for ourselves; though we definitely hope that others relate to it in a similar way too. Within pretty much all of our songs are explorations of ideas of magic. There is definitely a ‘witch revenge concept’ running throughout “Firestarter”– perhaps part of the song’s engagement with magic is that it is possible to invoke some kind of power there against the wrongs that have been done against you.

My perspective is that all music can create within ourselves supernatural feelings. We ascribe so many deep and powerful emotions to sounds; they move us so intensely. That magic is always there, but it feels especially powerful when oppressed peoples make their own music– somehow that the music itself might throw the weights off of our shoulders and bring about clear and beautiful skies again. This for me is the interior of what witchcraft might be.

TK: As well, you’re quite deliberate in your choices to invoke politics in dance and pop music. You’ve supported GLITS and YasProjectPhilly via Bandcamp sales, how important is that connection to Twin Pixie? Why did you chose those specific groups to help support? Is there room for politics and social justice in pop and dance music, why or why not?

TJ:While I really appreciate this question, the content we’ve written about in our songs felt more necessary to write than it felt deliberate. I had been writing instrumental music for years, and it felt so easy to hide aspects of my identity within it. I think I can speak for Aiv and say that she was in a similar place with writing instrumental music. We just needed to finally make music where we could be really gay if we wanted to, or scream if we wanted to, or be soft if we wanted to, and be able to explore and express whatever interested us.

Coming from the classical music scene, I saw a lot of performing groups do “outreach” concerts that didn’t feel necessary. They would often decide that communities in need should witness classical performances. It’s not that people didn’t enjoy these performances, but it felt neo-colonial and performative. Sometimes communities just need donations, not an hour of Mozart.

We want to help when people ask, especially if we’re able to. And the communities and organizations we donated to were asking for help. We’re deliberate in who we chose to fundraise for, and we’re doing our best to be conscious in how we go about this.

Aiv: I understand my very existence to be political, controversial. Even our relationships to ourselves, our bodies, our minds carry a thousand ideologies that we are continually navigating through. It seems inevitable that, even when we feel banal or normal in those relationships, those ideologies will enter into the art that we make. I suppose that I am saying that all art is political. I don’t feel like I have the luxury of being “apolitical.” Twin Pixie’s desire to support community driven organizations stems partially from our understanding that we are part of a wider community; that all of this isn’t just about ourselves.

TJ: There also seems to be an audience, a community, that is craving to see more representation and space that healthily engages with ideas of identity. We are both part of that greater audience, and we feel the need to create as well. Twin Pixie is in part us making something that we wished already existed, and a lot of that is having grown up with a lack of representation.

TK: What’s next for Twin Pixie? Any live shows or albums on the horizon?

Aiv: We have been working away at the rest of this album, our three singles that we have released so far are all going to be on it, alongside a few more songs. We’re hoping to have that done sometime soon! But we also are perfectionists and so we end up working way slower than we’d like to, most of the time. We’ve been in the process of booking some live shows, and so we hope to have a few dates for that soon! And we’ve been working on a remix, too. We are also going to be trying out streaming ourselves working on some music production on Twitch this month.