Flash it back to the time Dr. Dog packed Rittenhouse Square to the brim in 2008 - WXPN 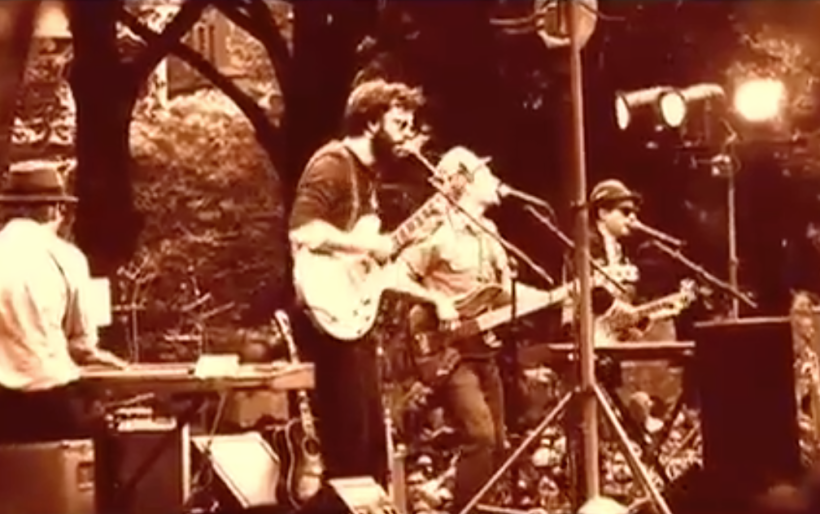 Flash it back to the time Dr. Dog packed Rittenhouse Square to the brim in 2008

In the late aughties, when the state of print media was healthier than it is today, the Philadelphia Weekly sponsored a hugely popular free concert series in Rittenhouse Square every summer. Highlights of Concerts In The Park from over the years included a double-header jam from Ground Up and The Lawsuits, a drop-in visit from cerebral New York indie outfit Phosphorescent, and Philly hip-hop crew Writtenhouse (the Writtenhouse in Rittenhouse play on words being too irresistible for anyone involved).

Among the most legendary, though, was an August 13, 2008 performance by Dr. Dog, the psyched-tinged Philly rock outfit who was then a hotly-tipped indie band making it way from the home-recorded basement-show world to indie rock bars and to bigger and bigger venues still. On the tidal strength of their second record, We All Belong — released the previous year — the band drew some 3000+ fans from around the region to the show on a balmy summer night.

This week, thanks to promoter Jesse Lundy (who booked the series for several years), we found this video nugget of the show from the folks at Woodshop Films and Scrapple TV. It’s very stylized in a early-21st century web content way — saturated sepia tones and a fringey silent film border on the title screen, playing into Dr. Dog’s old-timey aesthetic — but it captures the live energy of the band on the first big leg of its ascent.

Set to a performance of “The World May Never Know” from Dr. Dog’s 2005 debut record Easy Beat, we see bandmates Toby Leaman on bass and Frank McElroy on guitar bopping alongside Scott McMicken on guitar and lead vocals, and Zach Miller on keys and fedora. Juston Stens was still the band’s drummer in this incarnation — this was pre-Slick days — and you can see him grooving to the beat in between cutaways to the crowd.

Watch the video below. Dr. Dog plays five sold-out shows in Philadelphia to end the year (and their touring career) from December 27th through the 29th at the TLA, and December 30th and 31st at Union Transfer.