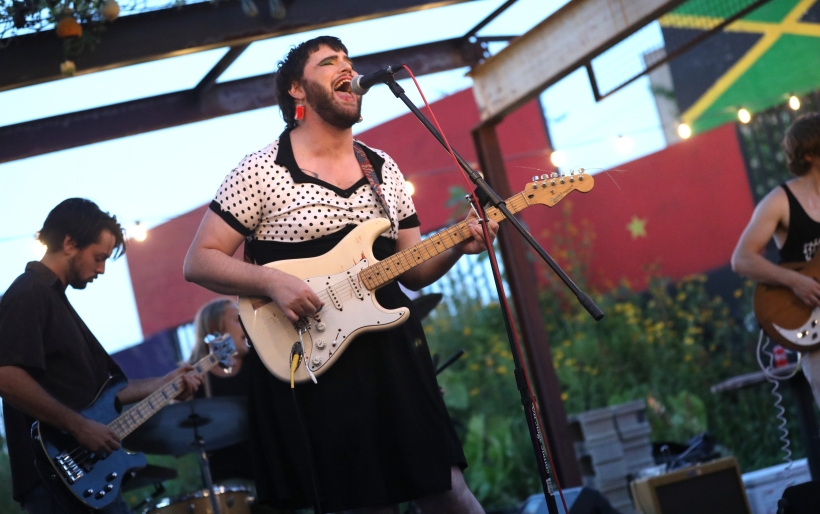 Last night, Mattie Klauser of Good How Are You Records told The Key’s Paige Walter that Sunflower Philly was giving them strong “Johnny Brenda’s summer edition” vibes. It’s a perfect description, especially with Marley McNamara of JBs booking a recurring Philly-centric concert series at the beautiful outdoor space at 5th and Cecil B Moore.

That series continued last night with two stylish, retro-leaning rock bands. The punkish garage outfit Kelsey Cork & The Swigs was up first, now featuring Klauser in the fold on second guitar, adding nuanced leads and atmospherics to compliment Cork and her bandmates’ already-compelling playing and stage presence. Headlining were Sixteen Jackies, playing their first live show since the pre-COVID days to a fervent crowd, and though frontperson Jody DeMarco still brings macabre theatrics to the stage (a Friday the 13th-style hockey mask, fake blood), it felt like the focus of last night’s performance was the tightly-crafted songs more than ever before; the cool new “Just Kids” had a groove reminiscent of Philly International Records, and DeMarco said that song is going to be out on streaming services in a couple weeks.

The Human Robot concert series at Sunflower has been plotted out through mid-September, with exciting new additions including the hip-hop collective MOBBLUZ on September 2nd and Britt Thomas on September 16th. Check out the full itinerary below, along with photos from last night’s show.