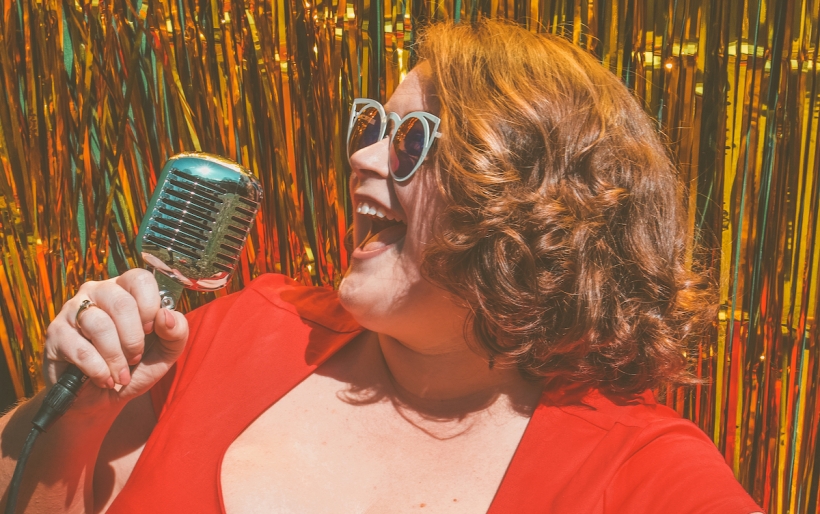 Essie Riddle | photo by Luke O’Brien | courtesy of the artist

Earlier this year, we were introduced to the knockout vocals of Philly’s Essie Riddle through a couple singles released with her friend musical collaborator Andrew Napoli — including “Loneliness,” which arrived set to beautiful footage and a clever story set in Langhorne’s Playwicki Park.

Today we get a taste of Riddle’s solo-artist persona and singular imagination with a whimsical, one-shot music video for “Reflection Of You.” The song is a beautifully-produced nugget of retro-contemporary indie soul in the vein of Amy Winehouse, and its visual component finds the singer backed by a loungey tinsel drape, cycling through a variety of costume changes, and utilizing props from flashlights to classroom whiteboards and a classic ribbon microphone to pantomime a day in the life of a music teacher / singer-songwriter, from coffee in the morning to confetti at night.

Watch below, and read on for our conversation with Riddle about theatrics, collaborators, show choir and more.

The Key: Did you have the concept for the video in mind as you were writing the song? Or did it come to you after?

Essie Riddle: This song actually was written over a couple of years. It kept evolving, and I didn’t want to rush it, so the concept kind of grew alongside the writing and tracking processes. I wrote the original opening in my bedroom in 2017 on GarageBand and we ended up keeping those original stems at the start. Since that night I always had this like “waking up, everyday life” vision but it wasn’t very specific. I wanted to have autonomy over the video concept and how I presented it so I flushed it all out before taking it to videographer or to anyone for production.

TK:Tell me about the logistics of a single-shot production like this: How much storyboarding did you have to do? How big was your crew for the shoot? Did you do a lot of run-throughs? Did the confetti have to be swept up every time?

ER: I listened to the song over and over and just would write down things that came to mind like confetti, and gold glitter, red, etc. Once I had this list kind of going, it sparked the one-take idea. I created storyboards in Canva, it was basically like clip art, but was enough for me to start meeting with a couple people I had in mind to help bring it to life. Amy Bishop, who is a wonderful human being, and also uber talented costume designer, is who I met with first. She helped me take it from storyboards to a game plan. She was the bridge to answer some of the “how do we make this happen in real life” questions. So things like “driving to work in a car” became flashlights and a frying pan thanks to her expertise. The crew was 4 people, me, Amy, another production assistant Grace Quackenboss, and Luke O’Brien filmed it. Grace and Amy are the hands in the video. We met at my house one afternoon and learned it, rehearsed it scene by scene, and then went for it. We actually only had two confetti guns so we had to be sure we were ready for the final take with confetti guns (no pressure, haha).

TK: You obviously have a love for big production video projects – the Loneliness video being another example – where does that come from, do you think? What do you like about immersing yourself in a storyline like this?

ER: I definitely have always had a larger than life imagination. Where I grew up in West Virginia, show choir was a big deal.  (If you’re unfamiliar, show choir is like a production of singing and dancing but for competition). My high school show choir was intense and I learned so much being in that group that is still evident from this video (hello, quick changes). My flair for dramatics only continued when I studied opera in college. I love acting and performing and using not only my voice but my whole body to communicate. I think these video productions are another extension of that communication. It’s one more layer and opportunity for expression.

ER: For me, it all starts with what the song dictates, but I’m always looking to do something that pushes me a little bit further. I don’t think I know how to be subtle so it’ll probably be something just as elaborate, knowing me.