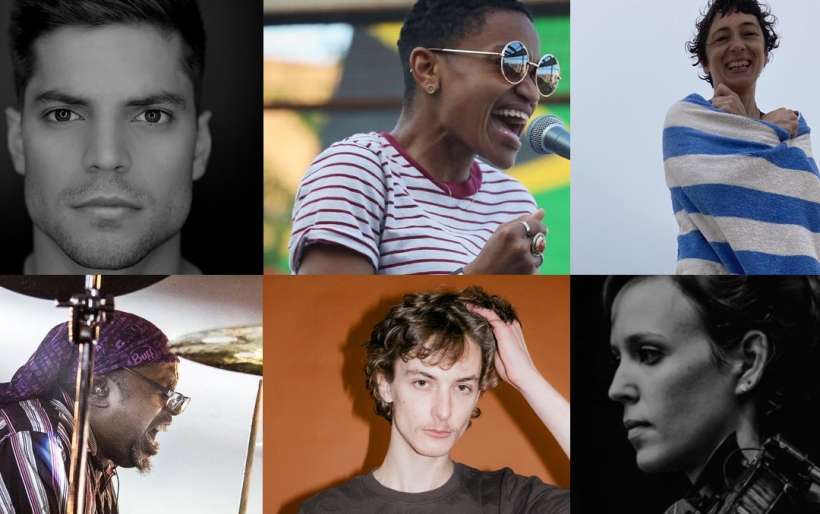 Twelve releases from Philly artists to support on Bandcamp Friday

What constitutes “normal” these days, anyway? Here at The Key, we’re happy that the Bandcamp Friday fundraisers have become reasonably normal. The digital music retailer launched these fundraising sales last spring as a way to help out-of-work artists make ends meet during the pandemic — for 24 hours, Bandcamp waives its 20% revenue sharing fee, sending every dollar from your purchase directly to artists or their labels — and the site has kept them going on the regular, with plans to continue them every first Friday through the end of 2021.

So who to support, and how? We recommend you begin with our previous Bandcamp Friday shoppers’ guides, as most of these releases are still available. To support the Philly scene in specific, you can peruse the Philadelphia tag on Bandcamp, and see what the newest and hottest releases are. And you can check out our own roundup below of 12 releases that have caught our ear the past 30-some days.

Shop local, support your scene, and happy Bandcamp Friday to one and all.

Her music is a meeting ground between deeply introspective lyrics and exuberant indie pop, and Philly’s Air Devi gets our attention every time her Bandcamp page updates with a new track. The latest, “Shaky,” is all about setbacks and uncertainty, those moments when you fail but nevertheless persevere. Sounds like a potential bummer, but by presenting these themes via her snappiest, hookiest power chord rocker yet, Devi won’t let you be sad. – John Vettese

Singer-songwriter and producer Bobby Brown needed a break from Philadelphia over the past year, so he decamped to Nebraska to restore his creativity. “I found myself living and working on a farm in the middle of Nebraska for the summer,” Bobby writes on Bandcamp. “Being away from everyone I knew and returning a place similar to my childhood reconnected me with my upbringing and forced me to be completely honest with my writing.” The result is a piercing, catchy three-song set of shimmering electric pop with left-of-center grooves and a guest contribution from Philly friend AnnonXL; it’s sultry, serene, and seriously good. – J.V.

Violinist and composer Molly Germer released a beautiful instrumental album of many moods on September 1st. Perhaps best known in Philadelphia for contributing strings to the music of Alex G, Japanese Breakfast, and The Districts, Germer performs with Philharmonic groups across the country. Her solo compositions are eerie and tense, and swell like the warmest of sunrises. Remedy, Germer’s first solo album, is the perfect afternoon accompaniment to a hot cup of tea and soft book of poetry. – P.W.

We first encountered Philly producer and soundscaper OSAGIE dropping tunes at a basement show in the before times. A force as a DJ, Osagie constructs his own music as formidably as he sequences other folks’ music, and the new set Sagacity III is a minimal yet massively energized array of house beats and turbulent synth textures to lift you up and keep you moving. – J.V.

All Away Lou – “Looks Right”

Lou Hanman is a British-born, Philly-based punk guitarist who you’ve possibly seen in one or many bands over the years: Worriers, Queen of Jeans, Thin Lips, and Mikey Erg to name a few. The song “Looks Right,” released under the moniker All Away Lou, is the first solo single we’ve known her to release since she’s lived in the 215, and Hanman plays everything — guitar, bass drums — while singing with joyful abandon about holding on to brighter days. It’s punchy and powerfully positive, and we can’t wait to hear more from All Away Lou. – J.V.

Punk music’s triumphant resurgence is spear-headed by bands like Philly’s Mesh, who are cropping up on Bandcamp’s lists of “Best Punk” AND “Best Albums of Spring 2021.” Mesh’s August release, their debut self-titled album, sounds like a blend of punk’s past and present, with a nod to Buzzcocks and DEVO. Their lyrics are serious yet funny, with memorable standouts like “They made my brain a computer / now I see into the future,” on opening track “CIA Mind Control.” – P.W.

Keeping with that theme of gravelly punk rock grit, there’s not a lot of information to be found about the new four-piece The Dissidents. We know they’re comprised of Rachel on vocals, Janine on bass and vocals, Bill on Guitar, and Shawn on drums; their demo dropped two weeks ago, there’s a “tape coming someday!”…and that’s about it. But also: the songs on this demo are raw and ripping, challenging oppressive societal structures with blast beats and ringing power chords. “A.C.A.C.” puts a different spin on the police-abolition slogan — here it’s “all cops are culpable,” and the song questions why legal authority to kill is even a thing. Thought provoking, powerful, and perfect to keep from falling into late-pandemic complacency. – J.V.

Another band with a mild amount of mystique and fritzy audio fidelity, the self-titled EP from four-piece Well sounds in some ways like a voice memo of a practice space jam. That’s not a knock, because it perfectly fits the frayed and nervy instrumental compositions — the Slint vibes are strong, particularly when guitarist Bissie reads a poetic piece on the track “Peg.” The band is donating proceeds from sales to a variety of organizations supporting Afghan refugees. – J.V.

In mid-August, esteemed bass player Jon L. Smith released his third solo record, “Yermo.” The surrealist illustration of a spinning top on the album cover caught my eye first, but I stayed for the instrumental grooves and inventive bass playing. Smith, who is a regular player at center city jazz club Time, also plays guitar and drums on the new release. Simon Martinez of Flanafi co-produced “Yermo,” and is playing at PhilaMOCA on Saturday with Grocer and Grace Vonderkuhn at PhilaMOCA. – P.W.

Following up the dazzling Startide project from earlier this year, Philadelphia multi-instrumentalist Keegan Tawa returns with Triangulation, a three-song set reflecting on the three-cornered geometric shape for 15 minutes. Tawa shines as a saxophone player with flashy, robust licks, but he’s also a composer and synth maestro, and with the assistance of buds like Trap Rabbit’s Arjun Dube on drums, Muscle Tough’s Jonathan Coleman on bass, and Gabe “GPS” Preston on soprano sax, the music grooves psychedelically through sprinting cumbia rhythms (“The Way of the Triangle”) and cosmic drum and bass grooves (“Triangulation”) that’s transport you. – J.V.

Philly drummer Grant Calvin Weston has a long and storied career of improvisation and collaboration, from Ornette Coleman’s Prime Time Band to John Lurie’s Lounge Lizards; you can get a sense of where he’s been and what he’s done in this interview with The Key’s Yoni Kroll, which we published around the release of the crushing Wail project with members of Stinking Lizaveta. That album was but one of a dozen-plus projects Weston has released on Bandcamp over the past year; he’s used his Soundscape Recording Lab studios as a place for creative exploration with peers and friends, and his latest — Weston & Triendl: Again and Again — pairs him with Harry Triendl, a soundscaper and multi-media performance artist, for an immersive set of otherworldly pieces that travel unexpected paths. – J.V.