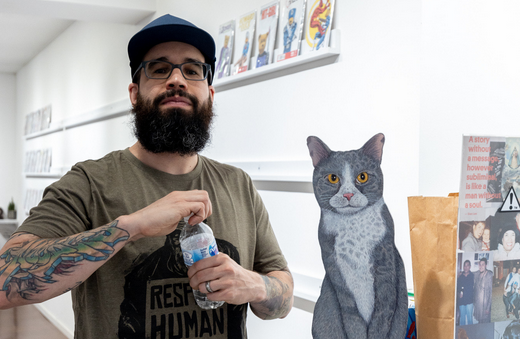 Sean Lugo | photo by Jason Chen | courtesy of the artist

As Philadelphia tries to live up to its name as “The City of Brotherly Love and Sisterly Affection” and takes in several thousand Afghan refugees, those seeking asylum are coming to a country more divided on the issue of immigration than many can remember. While some use immigration as a political tool, often to stoke flames of fear, Sean Lugo is using his life as the child of immigrants to shed a light on the migrant experience with his art.

Though Lugo is often inspired by the hip hop culture he grew up in, specifically groups like the Wu-Tang Clan and even Philadelphia’s own The Roots, his new exhibit at Paradigm Art Gallery, Immigrant Mentality, is a mixture of his musical influences and examples of what people go through to get here, and of the part migrants play in our everyday lives.

Just outside of New York City, in Weehawken, New Jersey, a young Lugo would sit drawing the superheroes he found in the pages of the comics he got at his local bodega. He has dyslexia, so traditional learning was a struggle, and he says, “the hyper visuals of cartoons and comics drew me in and were a huge influence on my art. I can remember being about 5 trying to draw comics.” With a tough upbringing, art became his escape. His mother, a Cuban immigrant, worked cleaning houses, and unfortunately at a young age, his father — a knowledgeable and fast-talking New Yorker — was sent to prison. But Lugo says he never lacked for family: “I had lots of moms and aunts to keep me straight.”

Growing up in an immigrant community, Lugo says he was surrounded by people who cared for and looked out for him. Most of his neighbors were Caribbean and South American immigrants, and that shared cultural experience made for a tight-knit community. While we often hear the story of the exceptional immigrant excelling at something phenomenal, the reality for most migrants is working hard jobs for low wages. “They do the jobs most of us don’t want to do, especially for the pay,” he says, and his art is very reflective of that, as we can see pieces that focus on what he says are the three main jobs “the barbershop, the chefs, and the cleaners.” For that reason, he dedicated his first exhibit to his mother, who passed a few years back from pancreatic cancer. Lugo said of Immigrant Mentality, “I wanted to honor her, and give back to all the people and the community who helped raise me.”

A big focus of the exhibit was on the ways immigrants come here — by air, by sea, and of course by land. It’s a five-part story, including the center piece that mimics the “Migrant Crossing” signs found near the border. Lugo added something I totally missed when I first saw them: he said “they are all phases of the moon as well, because that’s what people use to guide them in their travels.” Pieces also include abandoned water jugs for those who traveled through the desert to come, a makeshift grave site for the many that perish on the journey, someone embracing a loved one with passport in hand, and a person on the ground with a life vest on hands raised likely happy to have made it to land. While those pieces may be gone now (many sold) they are still able to be viewed on his website sean9lugo.com.

The largest part of the installation is Lugo’s version of a bodega — or in Philly terms, the “Papi Store” — what Sean says was “like my second home,” relaying the at-home feeling you have with your local corner store. “You know those people, they’ve watched you grow, they know your family. Your picture may even be up in there.” The exhibit is stunning, with shelves packed with custom pieces, a graffitied refrigerated soda case, and even customized comics with Lugo’s trademark bear heads in place of hero and villains faces. There’s even a hand crafted bodega cat made of wood.

Lugo’s site also shows where you can find so many of his street art pieces throughout Philly. He said “I quickly moved from doing doodles and copying my favorite comics to in my teen years doing graffiti.” Which he was later arrested for. But when he became aware of the street art scene, he quickly became enamored: “I always knew I wanted to make art for the street, but wasn’t sure how. Then I found this.” Around nine years ago, Sean moved to our fair city and swiftly fell for what he calls his “homebase for street art.” Philly is long associated with art, and street art in specific, being home to what most consider the godfather of graffiti: Cornbread. Sean said “I think it’s shameful Philly isn’t thought of more in terms of art.” When asked why he loves it here so much, he said “It’s so collaborative when it comes to work, everyone is so willing to combine minds on projects. [In] New York, everyone is so secretive and acts weird when you bring up the idea of collabs.”

When I asked what Sean had coming next, he exhaled, and said “I don’t know. This project took a lot out of me. Digging up a lot of old memories. Art is my therapy, so it takes a lot.” He does have an ongoing series he’s working on called, Clones, named for a song by Philadelphia’s own The Roots. “I’m a huge fan of theirs,” he says.

The series highlights great people from our wonderful city, often with their heads replaced with animals — which Sean says he does because it’s disarming and “it looks cool.” Of course the series features the legendary Black Thought, who Sean painted with a fitting goat’s head, but it also includes such legends as skateboarder Stevie Williams, and even two bear-headed Kobes. There is also a piece in his Immigrant Mentality exhibit that crosses over to Clones of chef and undocumented workers activist Cristina Martinez, who operates Barbacoa restaurant in South Philly.

He said he thinks Clones will hopefully be his next exhibit, but until then you can find his pieces around town and follow it all on his site and his Instagram at @sean9lugo. The “Papi Store” part of Immigrant Mentality will be available to view until September 19th. Paradigm Art Gallery is open via appointment during the week, and is open to the public from 11a.m. to 6 p.m. on Saturday and 11 a.m. to 5 p.m. on Sunday. If you come through Sunday, you might just get a chance to meet Sean Lugo himself.