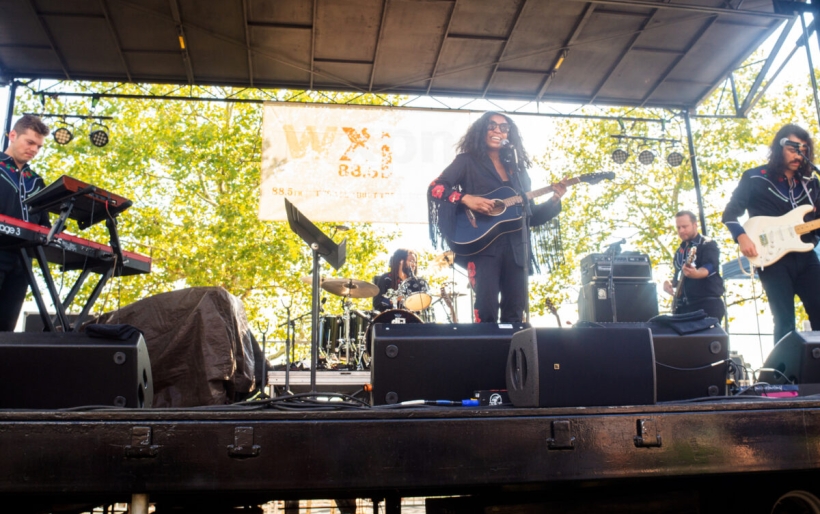 Adia Victoria and her band took the Marina Stage in style: coordinated Nudie suit attire with embroidered flowers and fringe, and a story about their trip: “we just got in that van for the first time since 2019 and drove up from Nashville.”

Fashion and geographical references weren’t the only way the southern United States factored into Victoria’s set today; it’s thematic core of her new album A Southern Gothic, released yesterday on Canvasback / Atlantic Records. The album is in many ways about reclaiming the narrative of the American south, and telling the stories that haven’t historically been told. As Raina Douris put it on World Cafe this week, it’s about “her relationship to the south…and the South’s relationship with her as a Black woman. It’s an album full of love, anger and — as Victoria describes — creepy grooves.”

“I’m from South Carolina, and I feel like I didn’t see anybody telling my story,” she said ahead of the airy, drifting “Carolina Bound.” “So I listened to Skip James and started telling my own stories about the south.”

The open sonic space and fervent floor tom hits of “Mean Hearted Woman” showcased Victoria’s band’s knack for stunning atmospheres — the song’s strength is often in its absence of sound — and she used the mood they set to tell a story about misogyny and how women are traditionally treated in Southern songwriting, as “crazy” antagonists.

“When I sat down and wrote A Southern Gothic, I wanted to ask what made these women so mean?” she reflects. “When it seems to me it’s by the hands of a man who doesn’t know how to treat a woman right.”

Later, she found serenity in “Magnoia Tree,” an ode to the foliage visible from her Nashville apartment window, the only thing she had to look at while on the pandemic lockdown. “That tree kept me alive this year,” she said.

The rousing “Different Kind of Love” from 2019’s Silences brought up the energy and gave her a space to showcase her bandmates, and the concluding punch of “South Gotta Change” channeled righteous rage and hopeful optimism into a poignant finale: “‘Cause I love you, I won’t leave you, won’t let you slip away / Come what may, we’re gonna find a way. The South gotta change.”

Check out a photo gallery of Adia Victoria’s XPNFest set below and revisit the weekend’s performances here.