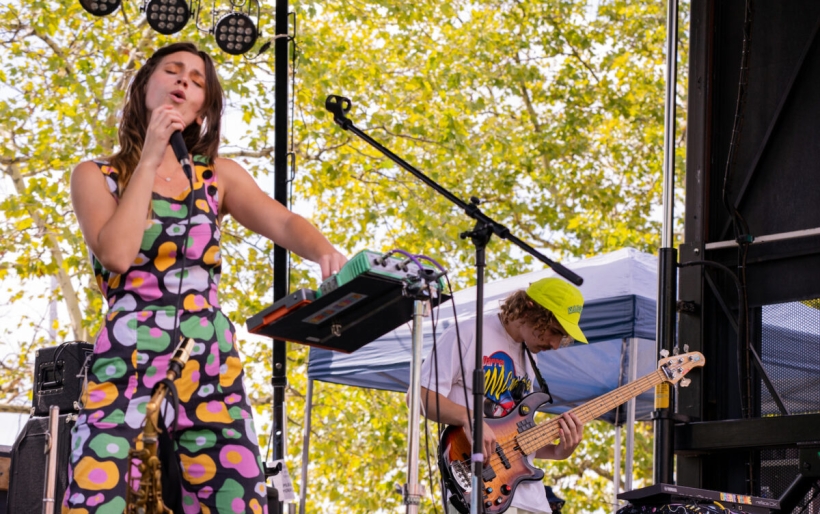 Great Time delivered exactly what their name promised earlier today on the Marina stage. The perfect way to set the tone for the day, their set was funky and fun from the second they started playing. With a whole swarm of people dancing, whooping, and jumping around, they made their performance feel like a party even though it was the middle of the day.

Despite delivering a playful set, their expert musicianship wasn’t lost. It was astonishing to watch the sheer amount of instruments they incorporated into their performance. While they had the typical bass, guitar, and drums, they also included a saxophone, flute, and various other forms of percussion. Frontperson Jill Ryan made it look effortless as she switched between playing lead melodies on the flute and hitting dizzying high notes.

The band ranged from new tracks like the synthy “80z Slo Jam” to old favorites such as “Rushin’.” They also did a cover of “Dancing On My Own” by Robyn, which blew everyone away. Getting into the groove, Ryan stepped back to dance and was met with tons of whistles and shouts of encouragement, which only spoke to their infectious stage presence. After seeing them live, their name makes even more sense.

Still, the biggest takeaway from their XPoNential appearance is that they know how to go out with a bang. Ending their set with “Rah’n Tah’n Kregg,” the stage was practically in flames. A loop of Ryan screaming along with a wailing guitar riff and crashing percussion created a tense build-up that they shattered at the last second. With unwavering intensity, they obliterated everything in their wake in a face-melting frenzy.

If you missed their set today or want to see them again (cause yeah, they’re that good) you can catch them at World Cafe Live on October 20; tickets and more information at the XPN Concert Calendar. Listen to their performance and check out a photo gallery below.