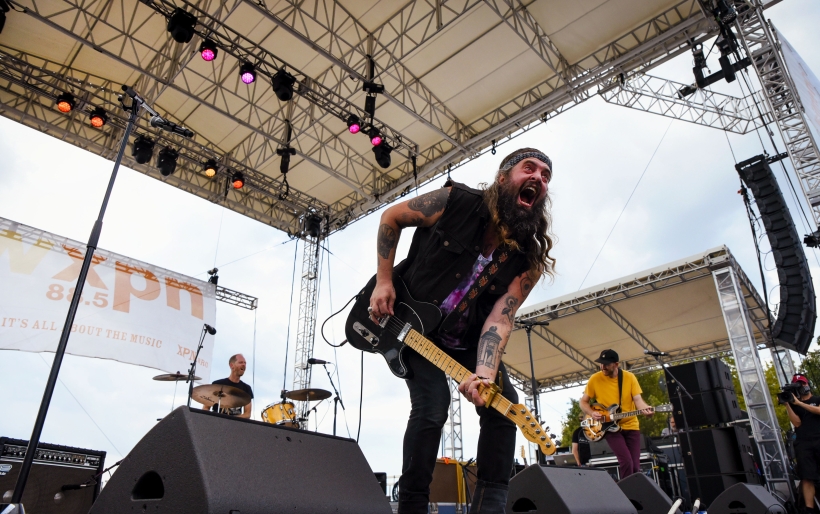 Strand of Oaks | photo by Megan Matuzak for WXPN

There hasn’t been a bad show yet and I don’t anticipate there will be all weekend but let’s face it, the Strand Of Oaks set at the River Stage late Saturday night had a special feel. There may be no bigger cheerleader for the XPoNential Festival, and WXPN as a whole, than Oaks’ frontman Tim Showalter and that love was returned tenfold. The result of all that mutual love was one of the best shows of the weekend.

Opening with perhaps the band’s biggest hit, “Goshen ‘97”, you could feel the nervous excitement from Showalter and company as they played their first show in over a year. Showalter is always a man who wears his heart on his nonexistent sleeves, but this reunion felt especially poignant. All he could manage to get out between most songs was a flood of “I love yous”, a sentiment the audience returned.  “I can’t sing if I’m crying,” said Showalter. Thankfully, the same doesn’t apply for listening.

The nerves fell away right as the band rolled into a four-song run from their upcoming record In Heaven. Highlighted by the album’s slow-boiling first single “Galacticana,” the sticky sweet “Jimi & Stan,” and culminating a solo rendition of the cosmic “Horses At Night”, it was the rare new music block that kept the audience entirely rapt.

The performance fully came together during breakneck rendition of “Forever Chords”, the closer from Strand Of Oaks’ last record Eraserland, a song Showalter lovingly dedicated to WXPN’s Bruce Warren. The song was a showcase for every member of Showalter’s new touring band which includes Scranton’s Pat Finnerty shredding on guitar and drummer Pat Berkery. “I hope it never ends” sings Showalter on the chorus, and I don’t think the packed River Stage would have minded one bit if the song itself, a galactically dense psych-rocker, had itself gone on forever.