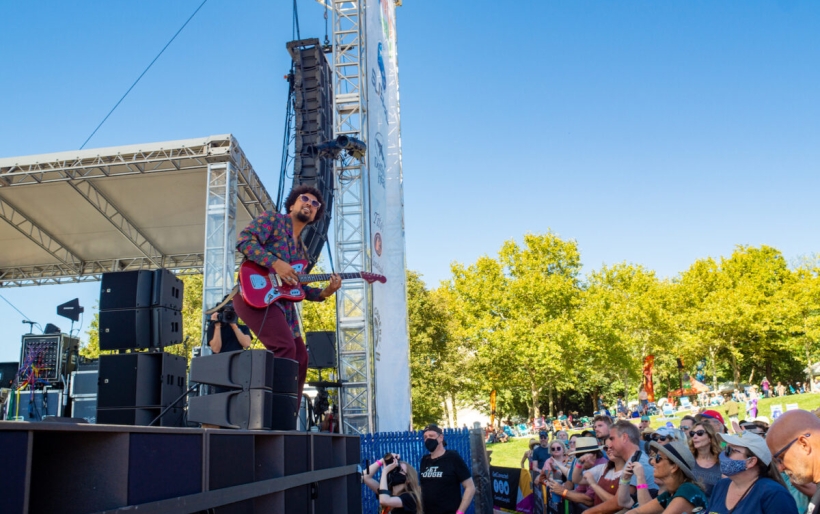 The Delco-born, Nashville-based artist has stepped up in the industry since we saw him play a charismatic set at the Marina Stage in 2019. He released an acclaimed album called Black Hole Rainbow, covered What’s Going On by Marvin Gaye front to back, and generally been a positive force during a difficult year.

The opening “Even Though It Hurts” channeled equal parts Amos Lee and D’Angelo, a breathtaking setup for the sparkling piano and soaring build heard on “High.” The peppy funk of “Here and Now” gave Gilfillian an opportunity to introduce his bandmates, and their nicknames — Joshua “A1” Blaylock on keys, Jonathan “Professor” Small on drums, and Taylor “Sweetie” Thompson on bass.

He joked that their collective mission was bringing cat people and dog people together, but really that was more about humanity at large. Before a cover of “What’s Going On,” where he was joined by roving brass band Snacktime, Gilfillian talked about how album proceeds will go to the Equity Alliance, which fights voter suppression in Tennessee. “It’s crazy down there, and we want to channel some Marvin Gaye for this world we live in.”

A slow burning new song called “Love You Anyway” was very specifically about bringing together the masses, Gilfillian told the crowd. “We’ve all been through a lot in the past year,” he commented, and the lyrics reflected the collective confusion of the 2020’s: “Everybody’s looking for a new solution, you know it takes time.”

Gilfillian’s brother Ryan joined him onstage to sing harmonies on “The Good Life.” “He’s more of a badass mother shut-yo-mouth than me,” Devon said, pointing out that he’s fundraising for a new wheelchair, and told the audience to find him on social media if they wanted to help out.

“Troublemaker” closed out the set to loud cheers and hopes that Gilfillian will make another return to his stomping grounds before too long; listen back to his set and check out photos below.