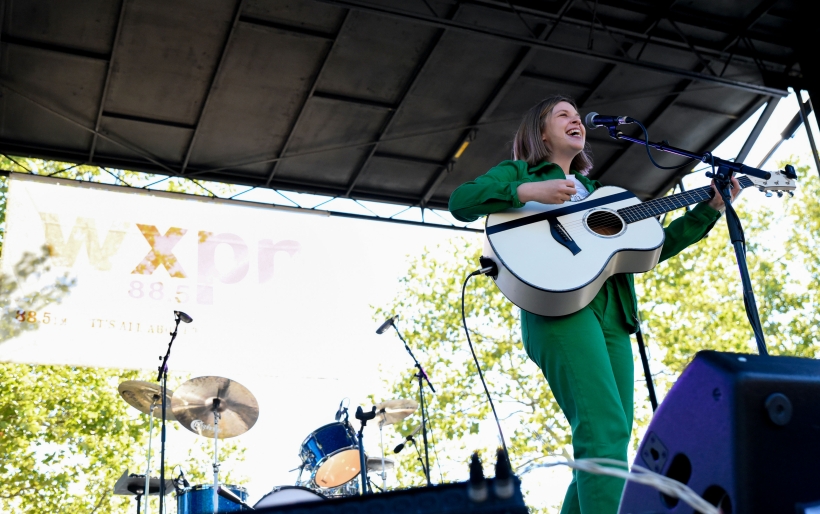 Jade Bird made it very clear she’s had her heart broken and lived to tell the tale during her performance at the Marina stage earlier today. However, instead of basking in her sadness, Bird shook it off. Laughing as she played two songs about getting cheated on back to back, the subject matter might be painful but you’d never be able to tell.

Instead of falling into the sad girl cliche, she delivered an upbeat acoustic set that felt like a breath of fresh air. At one point she did bring out her guitarist Lucky Kilmartin to sing a few songs which was a surprise considering “men don’t really get a good rep in my songs,” she joked. The duo did a bare-bones cover of Radiohead’s crusher “Black Star” that would even bum Thom Yorke out.

While Bird occasionally slowed it down, for the most part, she was high energy. She had the crowd up on their feet dancing the entire hour, which was the first time I’ve ever seen a group of people so enthusiastic about someone getting broken up with.

Still, the best part about Jade Bird is her captivating stage presence. Between songs, she would crack jokes and make quirky quips about how her various relationships imploded. The audience couldn’t get enough of her, and a few people remarked that she sounded exactly the same in person as she did on her records.

Bird will be back in Philly to play Underground Arts on October 14. Her new album, Different Kinds of Light, is out now, and you can stream it here. Check out photos from her set below and revisit the weekend’s performances here.