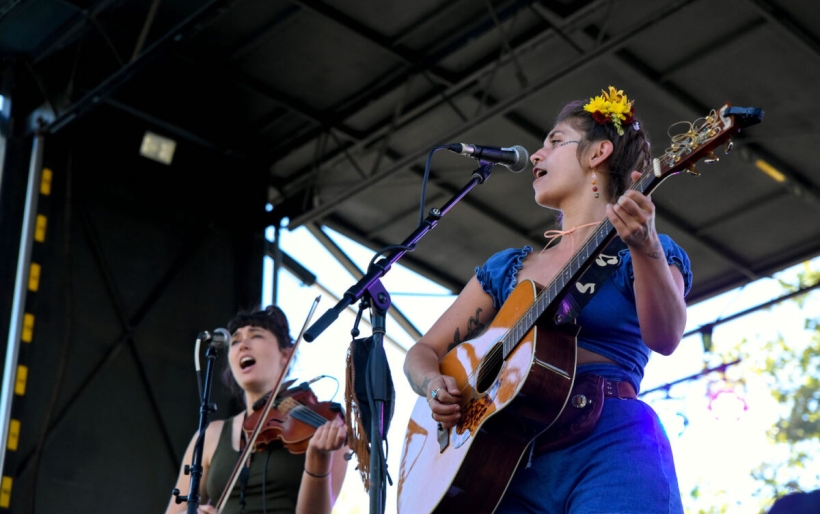 Of all the things to appreciate about music, one of the most remarkable is its ability to transport the listener to another place and time. Sierra Ferrell and her band did just that for the audience at the Marina Stage this Sunday afternoon. The Nashville-based country three-piece played a roaring acoustic set of tunes that sound like they were carried through the Appalachian mountains via decades-old winds.

Ferrell’s broad and deep voice was surprising coming from such a petite performer. “I have little hands, but they’re mighty,” she commented on stage. Her brand of country music sounded borrowed from old hymns, but with a contemporary feel. Ferrell was accompanied by an upright bass and violin — or perhaps more appropriate to their sound — a “fiddle.” When asked where they were from, Ferrell replied “Jupiter,” which further added to the mystique of their music.

Ferrell and her band graciously met with fans in the merch booth after their set, but were careful to remind fans to wear their masks. “COVID is still alive and real — we’re usually a four piece but our fourth member got COVID,” explained Ferrell. It’s important to remember that if audiences want to continue to see live music as we’ve all enjoyed this weekend, that we take precautions to ensure artists can maintain their livelihood.

Sierra Ferrell was XPN’s Artist to Watch in August when her most recent album, Long Time Coming was released. This upcoming Friday, she’ll play a Virtual Free at Noon with XPN, and on November 14th she plays Ardmore Music Hall. For tickets and more information about Sierra Ferrell’s upcoming local shows, visit the XPN Concert Calendar. Oh, and someone alert the Coen Brothers: they’re going to want Ferrell’s music for their next southern epic film.

Check out photos from Sierra’s set below, revisit the weekend’s performances here.

Setlist
Give it Time
Why’d You Do It?
In Dreams
West Virginia Waltz
Bells of Every Chapel
At the End of the Rainbow
Silver Dollae
Whispering Waltz
Don’t Let Your Dead Go Down “The Sea”
“Jeremiah”
Related Content
View All Related Content