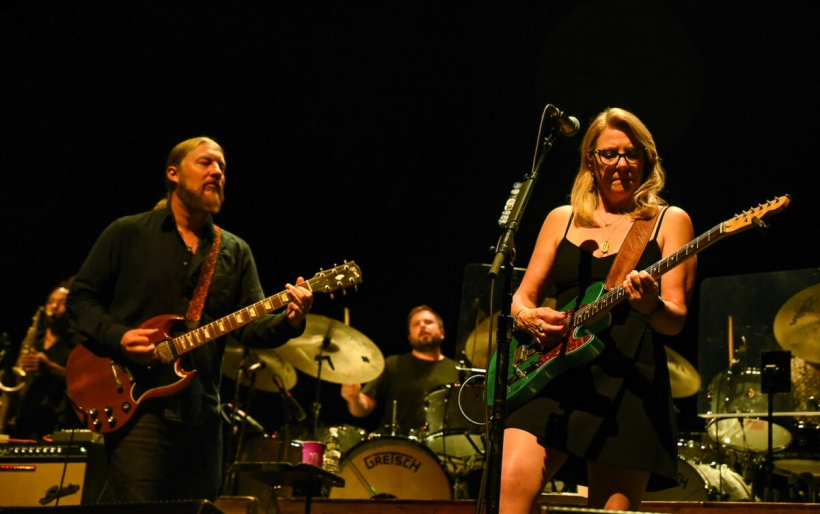 A beautiful end to another beautiful night, Tedeschi Trucks Band sent their homespun blend of blues and soul into the far reaches of BB&T Pavilion, capping off another great day at the 2021 XPoNential Music Festival.

Opening up the BB&T festivities was the Baltimore jam band Pigeons Playing Ping Pong, whose infectious energy bounced around the pavilion as the audience settled in for the evening. Their set was highlighted by “Something For Ya,” a funky epic expressly concerned with providing the boost of energy festival goers desperately needed after a long day of music. “Are you guys cool with some funk?” asked frontman Greg Ormont, receiving a jubilant response.  When a band is having as good a time as Pigeons Playing Ping Pong, you can’t help but join along.

Still, the majority of the excitement for the evening was reserved for the Tedeschi Trucks Band, whose jammy Americana was the perfect exclamation point at the end of the night.  Husband and wife duo Derek Trucks and Susan Tedeschi, and the rest of their band, are simply virtuosos, and they gave nothing but an impeccable performance from the night’s first notes. The band ran through an impressive mix of covers, highlighted in the middle of the set by a run that included a lively rendition of Allman Brothers Band’s “Don’t Keep Me Wonderin,” and a swaying, pseudo-gospel version of Derek and the Dominos’ “Bell Bottom Blues.”

Of course, the band brought plenty of originals as well, culminating in a scorching performance of their hit “Made Up Mind” from their 2013 album of the same name. It was a show that seemed to leave everyone satisfied and, as wiped out as they may be, ready for more great music heading into Sunday back at Wiggins Park for the final day of the XPoNential Music Festival.