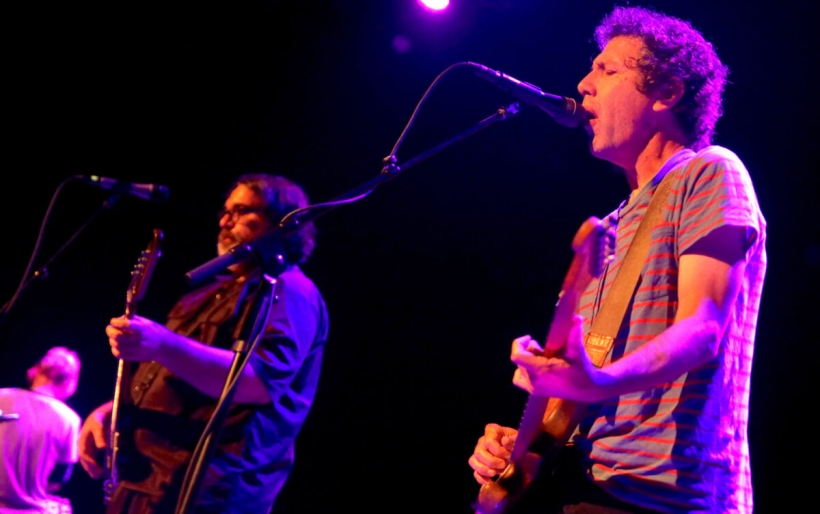 Yo La Tengo | photo by John Vettese for WXPN

Exploring two sides of Yo La Tengo at Union Transfer

As it turns out, we were correct. In considering this week’s Yo La Tengo Union Transfer show in our concert picks, our guess was that the performance would be neither contemplative quiet YLT — in line with their releases of late — nor classic noisy YLT, but the whole spectrum. That’s how it played out in last night’s “an evening with” performance on the occasion of the Callowhill venue’s 10-year anniversary: one set that leaned mellow and ambient, one set of cathartic rockers, with covers and deep cuts galore in the mix.

“We would have come sooner,” deadpanned singer-guitarist Ira Kaplan. “But we wanted to build up anticipation.”

It was a cheeky moment, but Kaplan was clearly quite serious and concerned about being on the road in these late pandemic times. “I don’t know if any of us onstage are ready to be where you are, so we are really appreciative that you’re [there],” Kaplan said. “This is fun. More than fun, it means so much to be able to be playing for you tonight.”

Set one opened with “You Are Here,” an expansive track from 2018’s There’s A Riot Going On that stretches from lingering drone to pulsing ambient groove. The downbeat pop of Georgia Hubley’s “Madeline” from And Then Nothing Turned Itself Inside Out elicited warm and enthusiastic golf-clap cheers from its opening notes — the crowd was mostly chill and attentive, save for a few chatterers in the balcony — while “Alyda” from 1989’s President Yo La Tengo was probably the deepest pull of the night. “We’ve been doing this song since before some of you were born,” said Kaplan.

A cover of Sun Ra’s “Somebody’s In Love” was a warm nod to the Philly crowd, almost as much as the yellow “YO LA” shirts in the style of Robert Indiana’s LOVE sculpture available at the merch table; Kaplan sent it out to the Arkestra’s Marshall Allen and the late Danny Ray Thompson, who passed last year. The set came down with Painful‘s “Big Day Coming,” as Kaplan passed the guitar off to Hubley to sit at keys while James McNew played bass and sleigh bells (their instrument-switching dexterity was particularly in effect last night). It made for a tranquil, reflective close.

Set two came out swinging with another Riot song, “Out of the Pool,” a dirty groove ride up to an explosive crescendo, followed by Painful‘s “From A Motel 6,” the poppiest number (and also the punchiest) up to that point. It would be unfair to say the second act took on a “greatest hits” vibe, but the crowd clearly loved bopping to the baseball stadium organ groove of “Moby Octopod” from I Can Hear The Heart Beating As One; it loved raging to the Popular Songs earworm “Nothing To Hide”; and it loved swooning to “Tom Courtenay” from Electr-O-Pura.

The gig got noisier as it went on, and while set one felt more collaborative, with each member taking center stage, set two felt like The Ira Show, with Kaplan bouncing across stage, flailing his guitar and body into a cyclone of sound and motion, while Hubley and McNew stood back and played rhythm section, keeping a meditative groove going to back their bandmates’ antics. They were joined briefly by Joe Puleo, a writer and musician from the Philly burbs, for organ accompaniment on Painful‘s “I Heard You Looking,” and he mostly kept in that downbeat pocket with the non-guitar-wielding members of YLT.

But everyone got room to shine once again on the cover-filled encore, McNew taking lead vocals on an unhinged cover of “Rocks Off” by The Rolling Stones, Hubley damn near stealing the show singing John Cale’s “Hanky Panky Nohow” — whenever she approached the mic, the crowd simmered down and locked in — and the whole band joining together for The Only One’s “The Whole of the Law,” their dreamy kaleidoscope of harmonies sending the room out on a blissful high.

Check out photos from the show and the full setlist below. Yo La Tengo’s fall tour continues tonight with a sold-out gig at Arden Gild Hall in Delaware, followed on Friday with a show at White Eagle Hall in Jersey City. Tickets and more information can be found at the XPN Concert Calendar.