Firefly On The Fly: Billie Eilish, Phoebe Bridgers and more bring warmth to a damp day one - WXPN | Vinyl At Heart 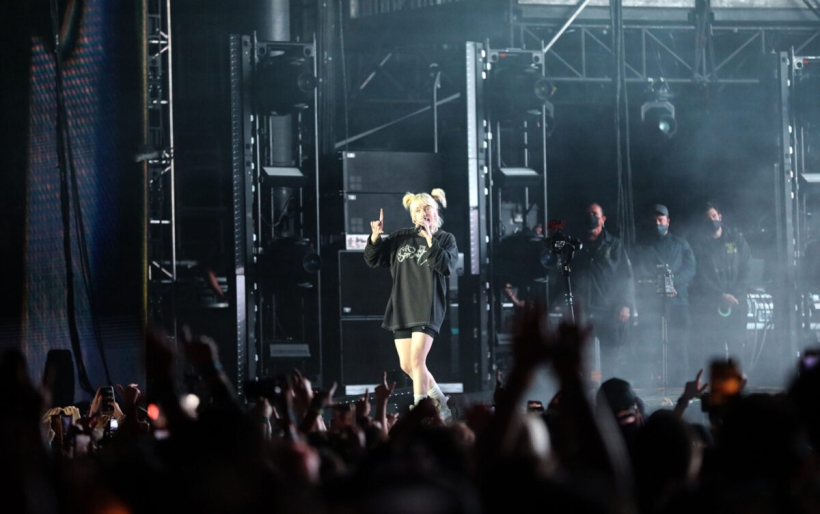 Billie Eilish at Firefly | photo by John Vettese for WXPN

Firefly On The Fly: Billie Eilish, Phoebe Bridgers and more bring warmth to a damp day one

According to an alert sent out to the Firefly Music Festival app before last night’s headlining set from Billie Eilish, it had been 823.7 days since The Woodlands of Dover last hosted this event. It’s probably safe to say this was not the return organizers had in mind: a torrential downpour as a storm moved up the eastern seaboard, a thorough soaking of the festival grounds and their occupants. Gates to an event that was supposed to start mid-day were pushed back to 6 p.m., and campers, artists, media, and staff alike waited in long queue after long queue to claim their wristbands, get their vax cards checked, and make their way inside.

To Firefly’s credit, their team handled the upheaval as best they could, with patience and without temper flare-ups or big shortchanges, completely retooling to schedule at the last minute to accomodate most Day One bands on the bill without too many cuts (Wilmington’s EyeBawl being a notable one – hopefully they’ll be able to slot in later this weekend). By the time I walked the now-muddy path approaching the Firefly Stage for a dynamic set from Girl In Red, it felt like, despite the delay, we were back, baby.

Here are some highlights of a short but potent day one.

What a massive burst of energy to begin on. Dancing between pop-punk, introspective ballads, and electro bangers, Norwegian singer-songwriter and producer Marie Ulven Ringheim acknowledged the somewhat crappy turn the day took several times in her very down-to-Earth banter, and then made us completely forget about it. She thanked the crowd for hanging through the mess and had them swooning to “We Fell In Love in October” and raging to “Bad Idea!” without missing a beat.

As I learned from an embarrassing mispronunciation on XPN’s IG stories, the “Del” in artist’s name is not pronounced “Delaware” like the state we were currently in, but “Del” like the Funkee Homosapien. Playing a set in the chilled-out Treehouse grove, Brooklyn singer-songwriter S. Holden Jaffem played mellow and contemplative folky moden rock in the vein of The City and Colour that had a calming effect on a still-tense day.

Hot off a much-drier set at The Mann Center’s Skyline Stage on Wednesday night, indie singer-songwriter Phoebe Bridgers packed the Firefly Stage lawn with devotees who joyously sang “Motion Sickness” and “Kyoto” word for word. She self-depracatingly deadpanned about the set’s turn into “low-tempo” when the need for high energy was clutch, but a leveling performance of Punsiher‘s album closer “I Know The End” brought it all the way up and was a source of much-needed catharsis.

A quick jaunt down the midway to Firefly’s Pavilion stage allowed me to catch the much-talked-about Baltimore hardcore five-piece Turnstile, giving a kinetic performance under a tent to a throng of moshing fans. They were great, though for first-timers like myself, the hype fell maybe a bit short. Not the band’s fault at all, of course – they played their hearts out, and certainly can’t control how hyperbolic folks on the Internet are being about this year’s Glow On. My mild contribution to the hype: if you’re a fan of albums like Relationship of Command and The Battle of Los Angeles, you’ll probably pick up what Turnstile is throwing down.

What to say about day one headliner Billie Eilish? She’s chill and also cathartic, she’s got charisma but is also withdrawn. She’s a freak, she’s the most normal of normal. She’s just like you. She contains multitudes. Or she’s a left-of-center pop singer-songwriter riding high on two stellar records that brought a variety of atmospheres to close out day one of Firefly. Standouts included the trancey club tones of “My Strange Addiction,” and a leveling take on the industrial-adjacent rager “Oxtocin.” She danced on the LED risers with her multi-instrumental brother Finneas and drummer Andrew Marshall, she raced out to the catwalk, darted stage left and right, admitted how slippery the stage was, chatted with the crowd, signed a fan’s chest in sharpie, and occasionally sermonized. Ahead of a soaring rendition of “My Future,” Eilish said “We need to fucking take care of our planet,” a nod to the extreme weather earlier in the day. “If people tell you global warming isn’t real, they’re a fucking idiot. We need to take care of our planet or we won’t have a future.”