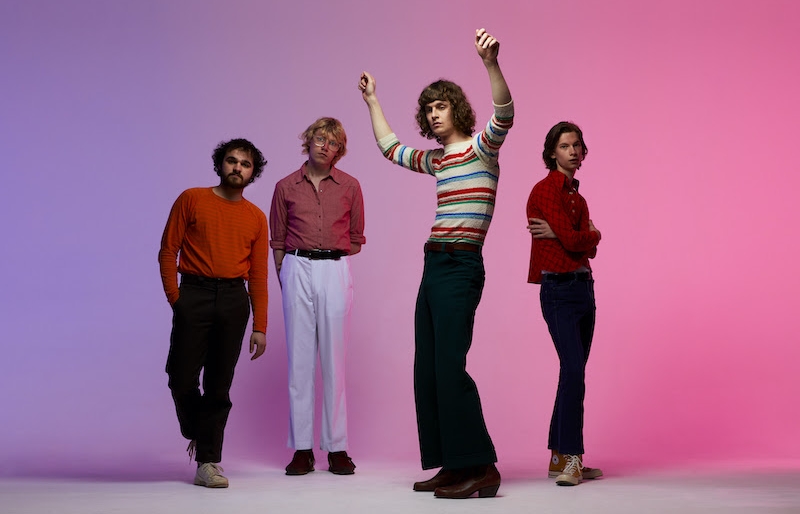 Buzzard Buzzard Buzzard is this generation’s T. Rex. Their glam rock and over-the-top antics make them instant icons. The Wales-based band who played a terrific virtual Free at Noon this winter have announced their new album, Backhand Deals, which will be released February 25 via Missing Piece Records/Communion. Late last week, they shared the first single from the album “You.”

The track is wacky and wonderful and perfectly embodies their boldness. With plenty of guitar flourishes and an elastic bassline, they create an easy groove. Frontman Tom Rees seems half-teasing as he builds up to an anthemic chorus with the lyric “if you don’t look out for you then who’s the fool?”

“‘You’ is a particularly sarcastic song,” Rees said in a press release. “I love how it could be misconstrued as a pro-independence anthem about really taking care of number one, not taking shit from anyone, and following your dreams, when in actual fact it’s all a ruse to outline the burden of imposed individual responsibility. I think the sarcasm in this setting can confuse people enough into thinking that I am indeed, an idiot. That’s the goal of this whole thing, to break down all of the know-it-all-rock-and-rollers down to what we all are, just people, with opinions… but that’s all they are, opinions.”

The accompanying music video also feels like some sort of ruse or inside joke. Tongue-in-cheek, Rees faces down reporters and guzzles down gallons of juice. Drowning in orange juice with his face painted to match, it seems like a dystopian Sunny-D ad. The video ends with him turning into a singing orange. Absurd and outlandish, the video perfectly matches the band’s persona.

You can check out their video below and stream “You” here.