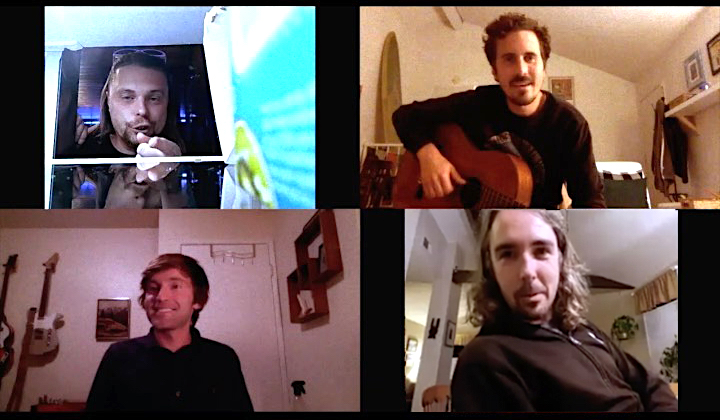 We took it as something of a good sign this spring when Cheers Elephant posted to their Instagram page for the first time in what felt like forever, marking the 9-year anniversary of their terrific 2012 album Like Wind Blows Fire. Could it be? Are these indie-psych-pop faves from the Philly aughties scene back together again?

Well…yes, and they have been for a minute, though COVID certainly complicated that.

The story so far: band left town in 2013 with ambitions of making it big in Los Angeles, but frontperson Derek Krzywicki departed the lineup a year and a half later, reinventing himself through the Secret American solo project. A few one-off singles with remaining bandmates Mat Rothstein, Jordan del Rosario, and Robert King followed his departure — as well as 2017’s Satellites album, which showcased older Cheers songs never before recorded, along with new cuts. Krzywicki rejoined his old friends for a low-key reunion in February 2020, playing a well-recieved show at LA venue The Satellite. Of course, we all know where the world went from there.

Today, we happily have news to report that 19 months after that gig, Cheers Elephant v 2.0.1 is in effect, and the four original members will headline World Cafe Live in Philadelphia on Saturday, December 4th — their first hometown show since April of 2014.

Joining Cheers on the bill is Camden, NJ singer-songwriter, producer, and dancer Kingsley Ibeneche, who delivered a stunning set at Porchfest this June, as well as Echo Kid, the post-RFA project of Brendan McHale and Christian Turzo-Egan (read more about them in this interview with The Key’s Emily Herbein). Tickets are on sale Friday, October 1st at 10 a.m., more information can be found at the XPN Concert Calendar.

The band also announced a Cali companion to that show at The Echo in Los Angeles on January 13th with Annabel Lee; more on that show here.