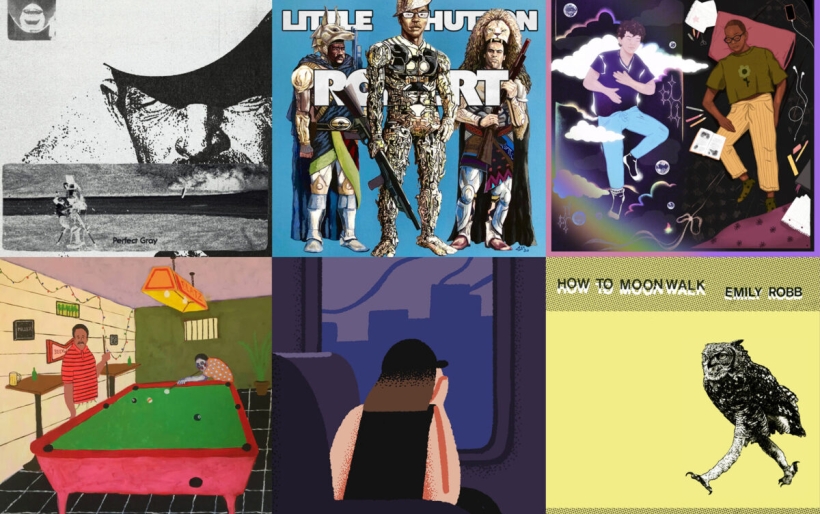 Ten releases from Philly artists to support on Bandcamp Friday

It’s the start of another month, and that means our regular Bandcamp Friday shopping spree — your chance to buy local while shopping digitally. The music and merch website has, since the early days of COVID-19, designated the first Friday of the month as a day they waive their fees (15% of sales on downloads, 20% of sales on merch), sending more money into the pockets of independent artists and labels.

Read on for a mix of slowcore, hip-hop, indie pop, hooky rock, and more from the local scene that we recommend you pick up this month; and as always, we recommend you consult our past Bandcamp Friday roundups for further shopping suggestions.

Joyer wants to be happy but they just can’t quite figure out how. On their latest album, Perfect Grey, released via Julia’s War Recordings, the New Jersey-based band finds themselves slouching into grief despite searching for solace. Their drowsy slowcore is numbing even as they try to find some sort of silver lining through sunrises and girls that taste like berries. The auditory equivalent of a fake smile, it’s a prayer for peace thinly disguised as shattering shoegaze. – Samantha Sullivan

If Philadelphia rapper singer-songwriter Emyne’s music wasn’t already impressive enough, her freestyles will blow you away. 21-Keep It, Emyne’s latest EP released earlier this month, features a four and half minute improvisitory track that makes Emyne’s process seem effortless. Of course it’s not without great practice and skill that any rapper can freestyle so successfully, but Emyne’s confidence and eagerness to share her story carry her words at an astonishing speed. 21-Keep It is “a collection of songs that illuminate the lessons, pain and nurturing I’ve experienced since turning 21,” says Emyne. “And a fuck you to anything and everybody who put me through hurt. Allat BS…ya’ll can Keep It.” – Paige Walter

The nostalgic rock n’ roll power duo The Retinas have a lot to say on this short 3-song collection, covering stories of deceit and societal commentary. “Everything’s so complicated / Watching a man on TV / He’s telling you how to be / Fuck ‘em,” vocalist and guitarist Thomas McHugh sings on “Everything’s Complicated.” The Retinas will bring their 80s sound to Union Transfer on November 19th opening for Mo Lowda & The Humble, a show fans have been waiting for since before the pandemic started. Sweet Nothings is available in the meantime. – P.W.

While we’re waiting patiently for a new full-length from Philly indie rock band Highnoon — their 2019 release Semi-Sweet was a captivating introduction to Kennedy Freeman’s songwriting — the demos and singles released over the past year and change have kept us engaged. This Bandcamp Friday, Freeman teams up with Philly friend Gavin Oswald for a delightful cover of The Postal Service’s “Sleeping In” that stays quite true to the original while at the same time lending it a bit of a looser, basement show electropop texture. – John Vettese

Emily Robb – How To Moonwalk

Philly singer-songwriter and multi-instrumentalist Emily Robb is releasing her first solo outing this fall — How To Moonwalk, a nine-song, 300-press LP out December 3rd on indie label Petty Bunco — and based on the teaser track, it couldn’t be more different from the stylish retro rock of her previous band Louie Louie. Recorded in collaboration with experimental guitarist Bill Nace (who also works with Sonic Youth’s Kim Gordon in the duo Body/Head), “Live at Friendship Speedwell” is a scorching seven-minute expanse of noisy atmospherics that wail and whirr and don’t let up. We can’t wait to hear what kind of energy Robb brings on the remainder of the LP. – J.V.

Ylayali revisited his magnum opus, Magic Eye, which he released over the summer via Sleeper Records on his new EP magic eye live. The first three tracks see him switch out his signature jangly shoegaze for an intimate live setting. With minimal accompaniment, subtle static, and brittle vocals it seems like the rest of the world has vaporized or you’re the last person left on Earth. The last track, a remix of “Read Yer Heart + Ride” by Randy Winters, is a breakcore meltdown that will make your heart pound. The profits from the release will be donated to Soul Fire Farms, an Afro-Indigenous-centered community farm dedicated to ending food apartheid. –S.S.

The Squawk Brothers call themselves “The Preeminent Classic Country Band in the Northeast…of Philly,” and it’s just this kind of self-awareness that keeps them relevant, and from sounding too nostalgic. The wholesome group with a changing lineup of established Philadelphia musicians — members of Purples, The Teeth, and others — who took a long hiatus, are back in a big way: first a show at Sunflower Philly opening for Britt Thomas earlier this month, and then at Johnny Brenda’s supporting The Bailey Hounds on October 15th. Country music is having a comeback in Philadelphia, and The Squawk Brothers are a delightful part of it. – P.W.

The Tisburys – Pictures of Fireworks

The more music The Tisburys release, the less we’re inclined to use the word “Americana” to talk about what they do. Their new EP, Pictures of Fireworks, incorporates synthesizer sounds and indie pop energy, askew structures we haven’t heard from this band before and collaborative voices like Riverby’s August Greenberg. Frontperson Tyler Asay’s songwriting remains pictorial and specific in its storytelling detail, but their new sonic adventure feels like they’re going on a journey akin to late-era Strokes and Arcade Fire. They wear it well. – J.V.

agita_online – what if I can’t calm down?

Rachel Dispenza of Philly’s Coping Skills has been busy touring the country with Japanese Breakfast, and in the midst of it recorded and released their first solo EP under the agita_online banner (aka their most excellent IG handle). what if I can’t calm down? is a bright, brief, but very emotive collection of on-the-go synthpop instrumentals and vocal cuts that, in the spirit of early records by The Magnetic Fields, seem like perfect road music. – J.V.

Veteran Philly rapper Curly Castro brings the goods whatever project he’s attached to — Armand Hammer, Career Crooks, Wrecking Crew, or solo — and Little Robert Hutton is his first outing under his name since 2018’s Tosh. Flowing over grizzled boom-bap beats and psychedelicized atmospheres, Castro approaches this album with a touch superhero-esque mythologizing (a la his heroes, Wu-Tang Clan), but it also features another component Castro brings to all his projects: Black history, and Black heroes. In this case, the album’s namesake, Robert Hutton, was the first recruit of the Black Panther Party, and a Panther who was killed by police in 1968; in his spirit, Castro makes music he calls a “paen to the radical imagination.” – J.V.