The First Days of World Cafe - WXPN | Vinyl At Heart 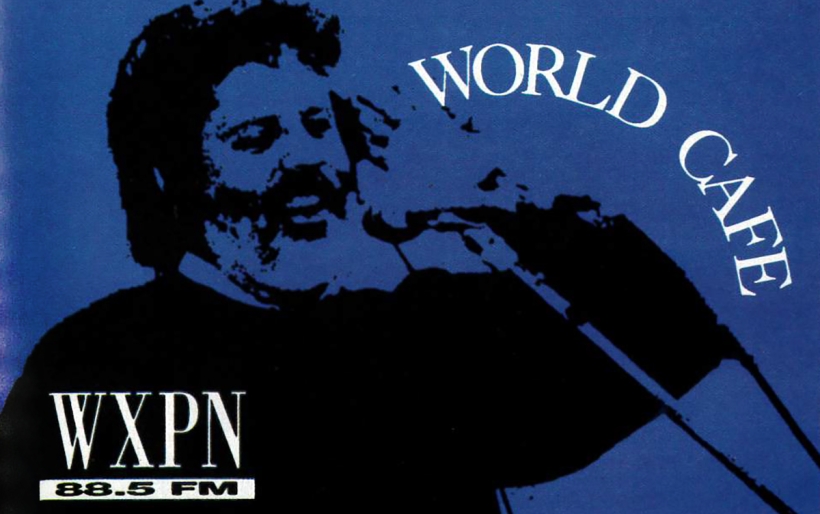 The First Days of World Cafe

The broadcast of the  first live World Cafe on October 14, 1991, could not have been more tense, technologically challenged and different than the stream-lined show Raina and Kallao host today.

First of all that word “Live.”  What were we thinking? We had a a window on the NPR satellite at 10AM Monday to Friday for two hours — which means that at 10:00:00, producer Bruce Ranes thrust his finger at me through the glass and, gulp, we were on-air broadcasting to our first five affiliates from Iowa to New York City.

From the perspective of present technology where, during the pandemic, the entire show could be assembled in the staff’s  bedrooms from Philly to Toronto, things were primitive.  Not digital, we recorded on tape.  XPN had one broadcast studio, so the morning show had to finish 15 minutes before 10 so they could clear out and World Cafe could set up.  XPN’s current mastermind Bruce Warren was an associate producer and Bruce Ranes was the head producer. Along with part-time help from Joe Madden, Amy Morrissey and even Cyndy Drue, as a board-op it was a skeletal staff.

So, back to the live studio. We made it through the first live break with minimal stumbling from your host.  Remember: mistakes were just part of the show.  That first show — which you can hear on the radio tonight at 8 p.m. on XPN, or streaming below — featured our once-ubiquitous theme, which was edited from a piece by the Brazilian musician Gonzaguinha.  The musical focus of the World Cafe was a mixed singer-songwriter fare and world music, which seemed quite inclusive the time, but was really quite limited in a “public radio” manner.  The first show featured XPN music director Mike Morrison reviewing the then-new Billy Bragg album Don’t Try This at Home and a 40-minute tribute to Paul Simon on his 50th birthday.  Listening back, I have to commend the host for acting calm and professional while freaking out when the mic was off!

There are many anachronisms, including a stilted explanation of Christopher Columbus Day with a then certainly-not-widespread acknowledgement of indigenous people. You can hear me asking our listeners to get in touch, by regular mail!

The live sessions were not a feature of every show, because we did not have the resources to get musicians to climb the stairs to our makeshift studio five times a week. They ran from quarter-inch analog tape reels that were minimally edited, not like the meticulous production Kim Junod and John Myers turn out today. Live could take a 20-minute break while the session ran.  Our first session aired was Bruce Cockburn, but the first one recorded was the Philadelphia band The Low Road.

We grew from that first show. Slowly at first, but then adding affiliates and learning from our many miscues. An exciting and important beginning for XPN, I’m proud to have been part of it.