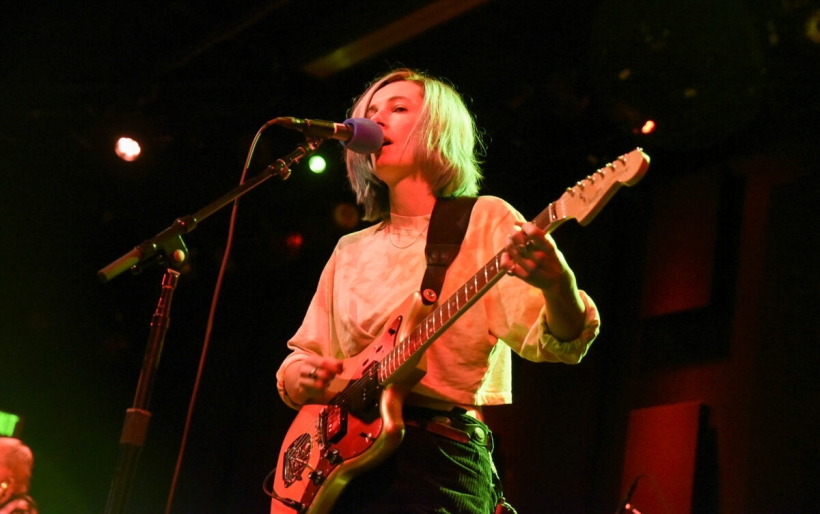 Slothrust at Free at Noon | photo by Paige Walter for XPN

Wrapping up their first leg of tour in support of the new album Parallel Timeline, Boston three-piece Slothrust played to the midday crowd at World Cafe Live for today’s Free at Noon concert — and it became clear very quickly that this wasn’t going to be an immediately definable set.

The opening “7:30 a.m.” roared from jangle-pop to punk overdrive; it was followed by the sassy “Cranium,” where frontperson Leah Wellbaum put her guitar to the side to groove and gesture; early set stand-out “Courtesy” moved to a pensive trip-hop beat as Wellbaum’s soaring voice channeled Kate Bush and Siouxsie Sioux. “I tried to play it cool but I’m coming in hot,” she sang, and it’s an apropos lyric if there was one — there’s no pinning Slothrust down to a single sound.

This stylistic variety went over amazingly well for today’s receptive Free at Noon crowd, who swayed to the mesmerizing psychedelic vocal loops of “King Arthur’s Seat,” screamed for more after the Cramps-y double-time rager “Planetarium,” and bobbed their heads to the Bangles-y organ underbelly of “Once More For The Ocean.” Slothrust will remind you of a lot of things at once, and somewhere in that cauldron, they’re forging something all their own.

Listen to the performance in full and check out a photo gallery and setlist below. Parallel Timeline is out now.