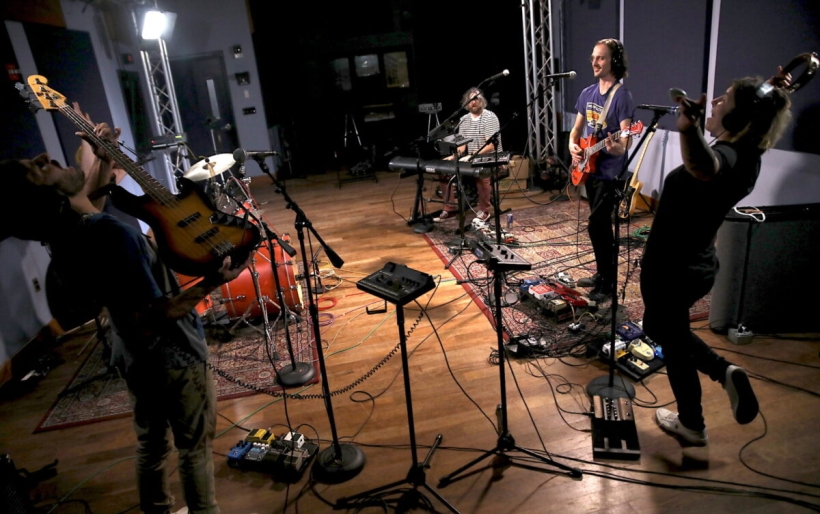 Over the past few years, Chestnut Grove has steadily rose to prominence in the regional music scene — particularly with this summer’s full-length release, The Album, a gripping and uplifting set of rippers that will make fans of Alabama Shakes and Deer Tick perk up their ears. But there’s a deeper background to this roots rock five-piece that local music fans might not realize unless they grew up alongside them in the northwesterly suburbs of Perkiomenville.

This band of late-twentysomethings — drummer and vocalist James Daniels, guitarist and vocalist Dee Gerhart, keyboardist / guitarist John Tyler, bassist Zach Winkler, and guitarist Gary Geers — are lifelong friends who have been making music together since they were in high school ten years ago; they detailed their background and journey over the summer in this interview with Sammi-Jo Wall. In 2019, they linked up with producer Derek Chafin of BarnSound Studio, who worked with them to capture both the frenzy of their live show and the focus of their songwriting, and we hear the results on The Album.

Now, with the return of live music, Chestnut Grove is aiming to show off their new songs and mature sound; their first show back was a sold-out limited capacity gig at Ardmore Music Hall in May, and now they’re in the midst of a residency at 118 North in Wayne that sees them headlining the Main Line venue on Friday, October 29th and Wednesday, November 24th.

Beyond that, Chestnut Grove is looking to re-link with Chafin this autumn to record a couple new EPs they’ll release in 2022; maybe we’ll hear some new songs at 118 North at these next two shows. For now, watch the band in action at WXPN Studios in this week’s Key Studio Session.

The three videos show off Chestnut Grove’s range: Gerhart owning the spotlight on the racing Americana rocker “Newspaper Hats,” then sharing the lead with Daniels (who sings from behind the kit) on the sleek retro rock of “Golden Age.” Daniels lays it all on the table for the trembling vocal delivery of “Whiskey Hand,” Chestnut Grove’s most popular song dating back to 2017’s Let It Down. Watch below, and hear more in the Soundcloud archive of their full session. For details on those 118 North shows, check the XPN Concert Calendar.