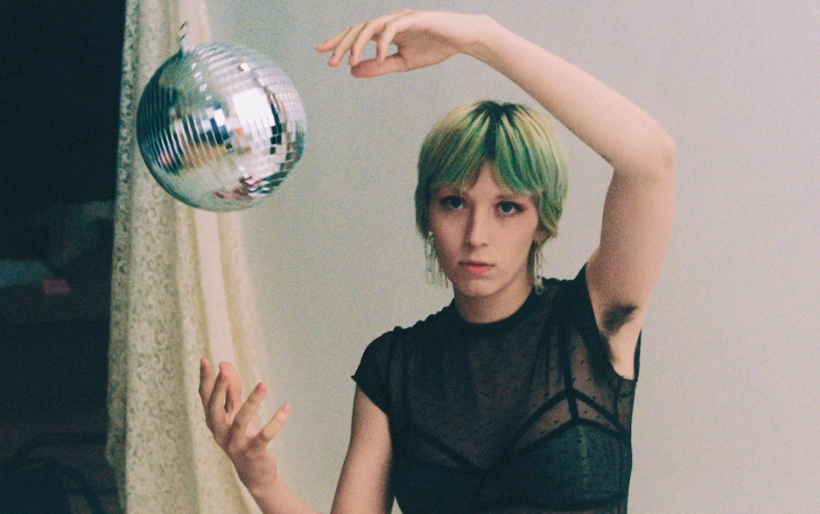 The superconnected isolation of Catherine Moan

Catherine Moan will have you completely immersed in a digital daze. It sounds like she somehow broke the boundary between where your computer screen ends and reality begins. On her debut album, Chain Reaction, released last month via Born Losers Records, she asks biting questions about the simultaneous freedom and dependency that the internet age has ushered in.

Moan had never seriously pursued music prior to the pandemic. She would occasionally mess around with a second-hand guitar that she acquired from her former boss, only to be met with complaints from her neighbors and roommates. It wasn’t until she moved into a house full of musicians that she was encouraged to give music a shot.

Inspired by scores from 70s Italian horror movies, she became enamored with early electronic music. Incorporating some of the ominous elements into the synth-pop she was already making, she ended up with something from the depths of cyberspace. She began releasing demos, and ultimately connected with Born Losers Records, who helped her navigate the foreign-to-her process of putting out a full-length album.

“I had no real knowledge of how the music industry worked,” said Moan. “I had no realistic deadlines or ideas of how an album get released. It was basically a crash course, maybe a lifetime’s worth of being a musician encapsulated in a year. I feel very lucky.”

Moan recorded Chain Reaction alone in her bedroom, which is evident in her isolationist dark-wave sound. The 80’s influence mixes with the ennui of bleary-eyed endless scrolling, giving the record the same sort of retro-futuristic feeling as an early Apple computer.

In a world where you are what you post, you could become anything you want. When everything suddenly went virtual last March, people had complete autonomy over the way others perceived them, a concept Moan became fascinated by.

“There’s definitely a dichotomy between how you act in person and how you act online,” she says. “I feel like the divide between those two got very blurred when all we were doing to communicate with each other is online. We can reinvent ourselves and act in ways that aren’t very true to who we are, but who’s to say? I got very obsessed with that because you can curate yourself more. Nobody sees what you’re actually doing anymore or what you actually look like. It’s all what you upload or what you say or what you tweet.”

This idea of conflicting identities and online personas pop up across the album. However, it’s clear that even Moan can’t draw a definitive conclusion on whether one is more or less authentic than the other. Once we log-off, what happens to the person we create? Are they some separate entity or a side of ourselves that we simply repress in real life?

This desire to digitally manipulate and mask who you are on the internet leads into the shimmering layers of synths she constructs. The whole album gleams and glitters with the same blue light on your computer screen. This critique of the dual identities and the parts of ourselves we chose to reveal and conceal is best embodied on the title track, Moan said.

Even love is explored in a sort of a dystopian right-swipe-obsessed simulation. She analyzes the cold romance that develops through dating apps and exchanging a few text messages that quarantine introduced us to. While these relationships only exist within the confines of your phone screen, she notes they can have the same visceral intensity as real-life connections.

These foggy lines between sincerity and what to make of feelings that arise through a screen are nothing short of nuanced. On “Wasted” she sings “my special someone has left and deleted” as if deleting a profile or message is equivalent to someone disappearing completely. Still, in a world where we have become conditioned to receive instant gratification from a never-ending onslaught of notifications, it’s tempting to believe that our problems can be erased with the click of a button.

“When I first started, I was in the headspace of the poetic, romantic nature of the pandemic where it was like ‘oh, we’re all separated from the people we love,’ or we want to love somebody,” Moan said. “I got very much into that corny online dating mindset and the general frustrations that came with it. I’m sure everybody had those one or two people they met online at the beginning of the pandemic, and it was a big mess that fizzled out in a weird way.”

A product of the collective unease, anxiety, and ambivalence of quarantine, Chain Reaction captures the way we clung to technology in an attempt to feel human. One of the few things that could keep us connected over quarantine, for a while it was the closest we could get to each other. Moan doesn’t seek to discount that; rather she forces us to question the personas we so carefully curated from behind the screen. As we slowly ease back into society, it forces us to ask ourselves: what parts of ourselves have we been hiding?

Catherine Moan will play at The Pharmacy on October 27 with The Palace of Tears, Solemn Shapes, and close out the night with a DJ set from Baby Berlin; tickets and more information can be found here. She will also be playing at Ortlieb’s on November 5 with XIXIX and Jerry at the Beach; more info here.

You can grab a copy of the album here and stream Chain Reaction below.