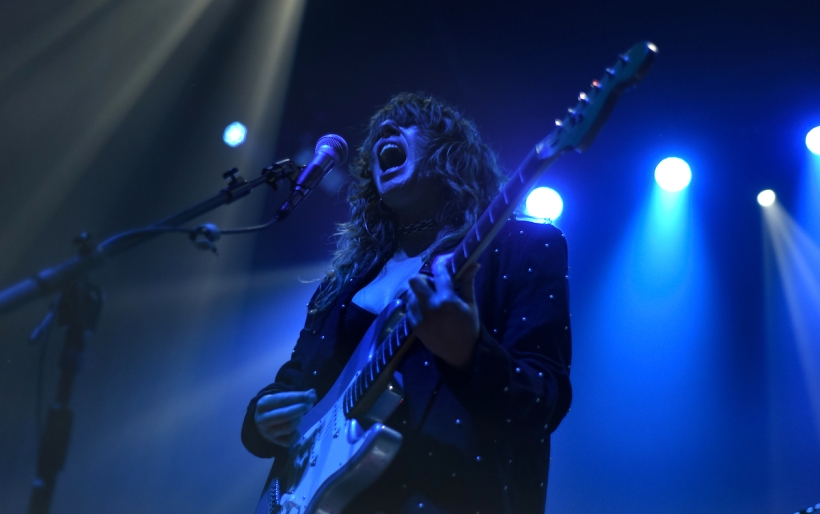 After seven weeks on the road playing two legs of tour with three bands in 35 cities, Mannequin Pussy are home. The last two weeks of the Philly band’s first run since lockdown, in support of this year’s Perfect EP, was particularly trying for the band: their van and equipment trailer was stolen in Akron, and though it’s since been recovered, all their gear and many of their personal belongings are gone. But they made it through with the support of their tourmates and their fan community, and the Philly love that waited for them at the sold-out Union Transfer last night — their biggest headlining show to date — was unparalleled, from the moments their openers took the stage.

It was like someone had lit a Molotov cocktail and threw it into a pit of firecrackers on the Union Transfer floor the second Pinkshift ripped into their first song. The Baltimore five piece understood the assignment, they performed with such ferocity you would think they mastered live music. Pinkshift was having an amazing time and it showed.

Ashrita Kumar commanded the stage, knowing when to be playful and when to let the freak flag fly. Her voice specifically could knock anyone off their feet. After playing “Get Out of My Face,” Pinkshift played two “quarantine songs,” the second of which was called “Crabapple”. Teeing up the track Kumar asked for someone, anyone, to give the track a better name. Philly did not disappoint.

“Young burns?…Go birds?” Kumar said. The crowd erupted with applause. They played “i’m going to call my therapist on you” next.

Angel Du$t followed, introducing a pacing, more lofi vibe to the crowd. The band’s setlist worked its way up from southern rock flavored desert riffs to fast-paced, tempo driven frenzies that opened up the pit. Their sound is that intangible weed, alien, gaze-rock amalgam that a select group of bands like DIIV inhabit. This is spot on, based on the surrealistic art that has accompanied Yak, A Collection of Truck Songs, which Angel Du$t played songs off of.

Lead singer, Justice Tripp, asked everyone if they wanted to hear what he wanted to be when he grew up and dove into “Stepping Stone”. For their last song they brought up Missy Dabice of Mannequin Pussy.

Mannequin Pussy set up, tuned up and walked off stage as the lights dimmed to a cool blue. Over the speakers the first couple bars of Meek Mill’s “Dreams and Nightmares (Intro)” came through. The crowd recognized the song immediately, and word by word the anticipation was thick. Now at the end of their tour, Mannequin Pussy ran out onto the Union Transfer stage ready to take their victory lap.

This U.S. tour, which spanned over a month and a half,  just about came to a close last night (they play the final date tonight at Bowery Ballroom). Missy took several opportunities to thank Pinkshift and Angel Du$t not only for being on the road with them but for loaning their equipment to Mannequin Pussy after their van and trailer were stolen.

No surprise, a “F*ck Ohio” chant from the crowd stirred up between songs. Also two, maybe three bras were flung at the stage and landed at Missy’s feet.

“Romantic” and “Control” were the first two songs, almost like a book ends between Perfect, released earlier this year, and 2016’s Romantic, the album that really caught on like wildfire. That’s not to say their 2014 self-titled didn’t get any play time — “Clue Juice”, “Meat Slave” and “Pissdrinker” were all there.  Mannequin Pussy and the crowd thrashing and singing their hearts out and lungs out of their bodies.

Midway through Mannequin Pussy’s set, Missy delivered a sobering performance for “High Horse,” off Patience, each grizzled and belted lyric as devastating as the next. Missy’s emotions during the song feel so real, like she’s experiencing everything again, right there in front of you.

Later, over twinkling, dreamy synth trills, Missy gave a sultry ASMR and told the crowd to stick in there, keep each other safe by wearing a masks while slowly caressing herself, ending with a cathartic unison scream. The start of “Clams” never felt so powerful.

Mannequin Pussy also played “In Love Again.”  At the most kismet time, the balloons attached to the ceiling fell onto the audience. It was a magical moment for the crowd and the band’s faces lit up as they watched and kicked around the balloons that made their way to the stage.  Bear then took center stage to end this Mannequin Pussy show and tour with Perfect’s “Pigs is Pigs.”

Check out a full photo gallery from the show below; although donations are now closed on the GoFundMe for the band’s post-theft expenses, you can support Mannequin Pussy by buying merch or grabbing their music on Bandcamp.