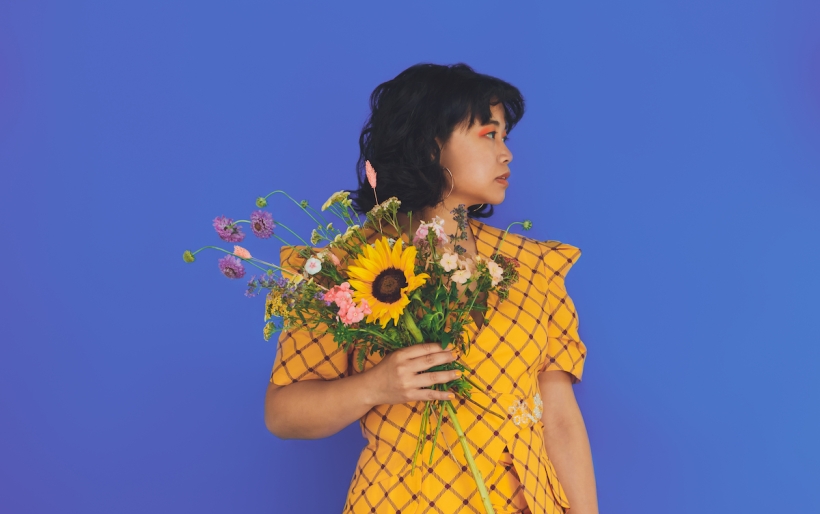 mitamu | photo courtesy of the artist

mitamu’s Tammy Huynh tells the story of her stunning, kaleidoscopic debut album sunflower in the east

“I heard that for young sunflowers, the blooms are constantly following the sun,” says Tammy Huynh of mitamu. “But once they mature, they permanently face east.”

Huynh, a composer, songwriter, vocalist, multi-instrumentalist and bandleader, calls her debut album sunflower in the east “a coming-of-age story” because she and the album have both grown together and grounded each other. “The record is a tribute to the trials and triumphs of growing up, learning to be vulnerable, and maintaining a creative existence in a commodified world.”

Huynh began work on the project in 2018 as an undergrad at Temple University, where she first studied classical piano but grew drawn to jazz. Through the last three years, she pieced together compositions on her own and with a host of other instrumentalists, building a collection of disparate musical statements all decorated in their own stunning sound-worlds. Now a graduate student at the Manhattan School of Music, Huynh counts Buffy Saint-Marie, Milton Nascimento, Nujabes, Mitski, anime soundtracks and arcade games among her musical influences, while her lyrics pull from poetry and spoken word. sunflower plays like a living document of a band who’s fully self-assured, unafraid to challenge its listeners over and over again.

I caught up with Tammy Huynh over the phone to hear about her debut album, as well as recent releases “SON OF A GUN,” “arabesque skies” and PHILLY POP (under the name Mỹ Tâm). Our conversation below has been edited for length and clarity.

The Key:You have been working on sunflower in the east since 2018! Can you describe how the process started and how you managed to complete the project during the pandemic?

Tammy Huynh: It started during my undergrad when I decided I wanted to write songs. By the end of it, I acquired a collection of songs that reflected this very formative time in my life, and I knew I wanted to share the songs in hopes of connecting with others. I wanted to give these songs the treatment I thought they deserved, so it took a few years of playing the music and growing before I felt ready to record. I worked multiple jobs and saved every penny so I could tell this music – this story, really – the way I wanted.

There were certainly a lot of setbacks while working on this during the pandemic. In addition, I was also starting grad school so working on it while there were these external forces definitely presented a challenge; being able to record, produce, and do the album art safely with others was always a concern. I wasn’t making much money due to the pandemic, but weirdly enough these strange times really forced me to slow down, and because of that I think I was able to put much more care into the whole project in general.

TK: While working on these arrangements, did you play through them with an ensemble, or just accompany yourself alone?

TH: Both – it all started with me trying to accompany myself and get a feel for the songs, and then I tried to play it with different groups of people. For the group I wanted to record with, things just didn’t work out, and I had to re-form the band many times. And finally we ended up with our current personnel, my friends Luca Farrell on keys, Pete Dennis on bass, Dave D’Arville on guitar, Joey Sullivan on drums, and then we recently added a new horn player, Brandon Choi, into the mix.

TK:Do you feel differently about these songs now, after all this time, than when you first started working on them?

TH: Yeah, absolutely. When I first wrote them, we were only starting to get to know each other – like I met a friend, and we’ve only grown closer. In many ways we grew together. The one song that comes to mind is “Mother’s Song,” which is actually the first song I wrote. My thoughts on what motherhood could be have grown profoundly, and I think it’s reflected on the arrangement that you hear on the album. But I think the same could be said with all these songs: they’ve all grown with me and matured in such beautiful ways.

TK: What inspired the lyrics you wrote for this album?

TH: Each song is a window into my life, and all reflective of these very personal and private feelings that I felt during this time. I think a really big influence in a lot of my lyrics is just poetry. The whole album begins and ends with one of my own; the poem that you hear right before “Mother’s Song” features my band’s resident poet Lindsay Hargrave; “Shipwrecked” was based off of a medieval Polish text that I read a really long time ago, just to name a few.

TK: I’m surprised to hear that your songs are inspired by private feelings, because I heard the album as a public or communal experience, something shared together. Is that the way you think about it?

TH: I’m actually really happy you said that, because I think that was the intention all along. I think for me, I really wanted to connect with other people with these feelings just so I could feel less alone, the world could feel a little less alone. So I guess the objective all along was to have it pretty shared, and communal in some ways.

TK: “Not suited for public consumption” really intrigued me!Can you describe how you put together the words and the instruments?

TH: I like to do something I call ‘subconscious writing,’ but I know a lot of people call it ‘free-writing.’ One day I did subconscious writing and that was what I came up with, and it really struck me because it revealed some feelings that I have about being an artist, just being a creative person. It’s really hard to have all your work be consumed in seconds sometimes, especially when you’ve put hours, days, months, years into it, and it feels weird to have it be consumed like that. And I think I start and end the album that way because I want people to realize that – hey, what you’re entering right now is a really personal part of myself. It’s actually not meant to be consumed, it’s meant to be shared. I want people to have that in the back of their minds as they listen to this, you know? Just to remember the human-ness behind every single person’s creative work.

TK: The whole album features an awesome variety of acoustic and electronic instruments. How do you decide which instruments to include in each arrangement, and how did you think about pairing your voice with all of those?

TH: I try to consider the story behind each song, and then world-build around it. To be honest, I can’t even tell you the whole process behind choosing each instrument; I think there was just this feeling that the sky’s the limit, and anything can happen because this is our world. Experimentation has always been a big part of music-making for me, and I’m really fortunate to have a band and production team that values those things too. Most of the time it really was just experimenting, and not being confined by what the world has already deemed good, but rather what we deem good. In terms of my voice, I don’t really view it any different than any other instrument. It’s a color that I decided I wanted to add, and that works collaboratively to tell the story I want to tell.

TK: Were there any specific recordings, composers or ensembles that inspired these sound-worlds?

TH: Oh boy [laughs] it’s so many! We even brainstormed a lot of the stuff during our production meeting. I have this running joke that the music that we make is anime music [laughs] because it’s something I’ve listened to growing up, as well as other people in the band. sunflower was definitely inspired by Nujabes; I mentioned that PHILLY POP was inspired by city pop, and I think that still comes into this album as well.

TK: Tell me more about the musical-visual collaborations you’ve worked on for this release and past releases? Do you always create the music first and design the visuals afterward, or work on them in tandem?

TH: I think it depends. For “arabesque skies” and “SON OF A GUN,” it was a collaboration with my friend Amber Jansen, who came up with this story and had these visuals already as references. And I fell so in love with the story that I wanted to make an animation for it, and really include these characters and visuals to tell her story as best I can. Also I wanted to write songs for these characters and places that she came up with.

In terms of “Old Young Boy,” I wrote the music first and then started brainstorming – you know, I could actually see this as an arcade game, an arcade game called “Old Young Boy.” Something really silly like that, and one thing led to another, like, what would this character look like?

So it depends, but I’m always really happy when it does happen. Because I definitely visualize things, and I know that I can’t really tell them musically all the time, and vice versa. And when those two things come together, it’s like magic. Like when my visual mind and musical mind work together, now these characters have voices, and these worlds have stories, and it’s really rewarding! At the end of the day I just like telling stories, that’s really what it comes down to.

sunflower in the east was released Saturday, October 30th, and the band is currently crowdfunding support for their physical release here. mitamu will play an anime-themed Halloween set at Milkboy on Sunday, October 31st with Dot Gov and KYON, more info on that here.