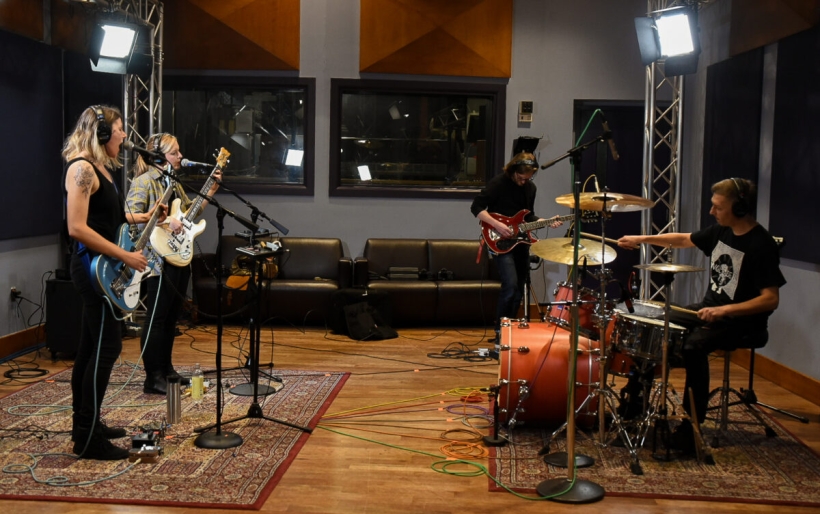 Screamcloud for The Key Studio Sessions | photo by Paige Walter

Emily Daly and Danielle Lovier have impeccable musical chemistry; they play side-by-side in the askew indie-punk four-piece Grocer, who touched down in the Philly scene just prior to the pandemic. While that band is built around multiple moving parts — different voices, different rhythmic components — Daly takes center stage in the gritty, grungey rock project screamcloud, where she’s once again joined by Lovier, but with the spotlight firmly on her.

Which is fitting, and honestly much-deserved. Chatting with Daly as we set up for screamcloud’s Key Studio Session, she comes across as a somewhat demure person — confident, but quiet at the same time; somebody who prefers in her other band to keep to the side and low-key shred. The studio lights dim and the recording begins, though, and she leads screamcloud through crushing performances of distortion pedal ragers, licks from her baritone guitar creating heavy atmospheres and moving moods, lyrics delivered in a tremulous cadence conjuring dense images of death and desire, of animosity and outrage.

Joined by guitarist Josh Curry — the original second guitarist of screamcloud — as well as drummer Luke Simoni, the band played four songs from its new LP Let’s Break Something that balance catharsis with a sense of fun that should appeal to anyone who vibes to Wild Flag, Sonic Youth, or early PJ Harvey. Watch performances of three songs from the set below, listen to the full performance via Soundcloud, pick up the album over at Bandcamp, and see screamcloud play Ortlieb’s next Wednesday, November 10th. Details and more information can be found here.