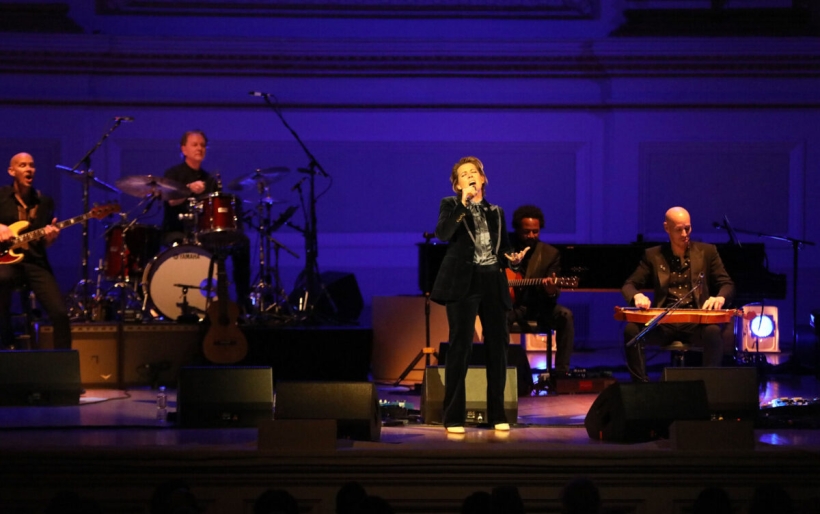 There’s nothing easy about Joni Mitchell’s music. It’s compositionally complex with unique tunings, unusual chord changes, and arrangements that range from minimal to massive. It’s lyrically profound, probing the deepest corners of the soul and coming up with questions that don’t offer easy — or any — solutions.

In short, a gig covering Joni Mitchell is a challenge at all sorts of levels, and Brandi Carlile was the first to admit this in her concert playing Blue at New York City’s Carnegie Hall last night — a celebration of Mitchell’s birthday, as well as the album’s 50th anniversary. It was Carlile’s second time saluting Mitchell’s masterpiece after playing the album at Los Angeles’ Disney Hall 2019, and she spoke at length of how they’re different as artists and vocalists; how if she goes too hard, the high notes are more akin to yodeling. She contrasted their performance demeanors, Mitchell being laid-back and herself being on top of (or sometimes ahead of) the song.

And yet the night was, as we‘ve come to expect from Carlile, magical.

From Tim Hanseroth’s opening dulcimer strums on “All I Want,” followed by a swift full-ensemble entrance  — two drumkits, pedal steel, numerous guitars — it was clear that Carlile and the band were determined to play Blue as faithfully as they could, bathed in (you guessed it) bright blue lights soaking into the back wall and ornate frame of Carnegie Hall’s and iconic stage. “I have no interest in adapting it, changing it, or reinventing the wheel,” Carlile said between songs. “I haven’t put my own spin on it. In fact I’ve been working my ass off just to learn it in a way that honors Joni and maybe make you feel connected to the way she might have played it for you in 1971.”

Musical director Jon Cowherd sat at a grand piano to accompany Carlile’s soaring vocals on “My Old Man.” She tackled “Little Green” solo acoustic, telling a story featured in her memoir Broken Horses about how her wife Catherine Shepherd got her hooked on Blue (and Mitchell in general). It was their first fight; Carlile was resistant to the record from a previous time she heard it from her friend T. Bone Burnett (who was in attendance last night) and found it too dainty. Shepherd insisted she listen to “Little Green” and pay closer attention its emotional story about giving up a child for adoption; Carlile’s takeaway, as she told last night’s crowd, that it’s “the toughest song in rock and roll.”

Anecdotes and reflections like this helped extend the 36-minute album into an hour-long performance last night. Sitting at the piano by herself, Carlile introduced “River” by referencing the unexpected and surreal friendship she’s forged with the singer-songwriter icon in recent years: “I got drunk over Joni’s house trying to play this once. It did not go well. Herbie Hancock was there too, it was fucked up. Can you imagine saying ‘excuse me, Herbie, can you get up from the piano so I can play “River” in C major?’”

Funny, for sure, but it led to a poignant reflection on the song’s impact over the past 50 years: “The way ‘River’ has redefined the way people look at Christmas music is a whole thing,” Carlile said. “It changed the way people…feel the obligation for it to be a holiday filled with cheer.”

Beyond Carlile playing narrator and storyteller, she played frontperson of an ever-rotating band that brought the nuances of Blue to life. Radiant harmonies from Jess Wolfe and Holly Laessig of Lucius provided a lively backing to “Carey” and neatly recreated the radio station fake-out on “This Flight Tonight.” A string quartet accented a show-stopping rendition of “A Case of You.” And the full 13-piece ensemble delivered a riveting performance of “The Last Time I Saw Richard,” the only major departure from the album’s sound.

Instead of the hushed and haunting piano elegy that Mitchell plays to end the record, Carlile led the band through a progressively building arrangement that started small and ended massive, drums thumping and Hanseroth’s electrifying guitar chords ringing from the rafters. A similar approach was applied to “Woodstock” from Ladies of the Canyon as an encore — which, Carlile joked, was a necessity with as short an album as Blue — and it took the hopeful naïveté of hippie-era Joni and cut it with some of the world-weary fear and cynicism of her 70s work.

Carlile and the Hanseroths stepped off-mic for a breathtaking pin-drop cover of her song “Cannonball” — “you don’t waste your life trying to get to Carnegie Hall without listening to what the walls have to say,” she said. Lucius and the band came back for “You And Me on the Rocks,” the very Joni-inspired song from Carlile’s latest album, In These Silent Days. (Listen to her talk about it with World Cafe’s Raina Douris here.)

And to end the night, Carlile and Lucius played one of Mitchell’s most recent works, the title track to 2007’s Shine, which Carlile described as a prophetic song full of uncertainty about modern society, mired in conflict and injustice and enmeshed in technology, but imbued with a cautious optimism for the future. It was heavy, but beautiful, and to add one last bit of levity to the night, Carlile and the full ensemble got the audience to sing happy birthday to Mitchell (who turns 78 today).

In her introduction to the night, Carlile spoke of the importance of giving folks their flowers, appreciating genius when it’s here. Maybe Londoners in the 1500s didn’t go around talking about how they lived in the time of Shakespeare, she said, but she wanted this audience to pinch themselves and remember that they walked the Earth at the same time as Joni Mitchell.

“Joni’s eternal,” Carlile said. “None of us would be who we are without her. That’s why we’re all here.”