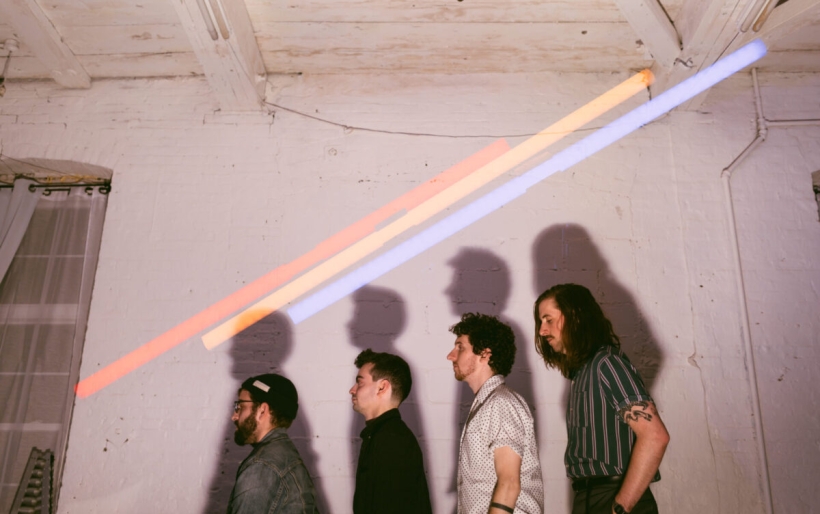 Caracara | photo by Ashley Gellman | courtesy of the artist

Caracara find themselves buried under the stress of modern life on their latest release, “Hyacinth.” After almost two years of writing and recording, the result is an ode to the short attention span, TV obsessed, never-catch a break mentality of the twenty-first century. The Philly-based band enlisted the help of the Grammy-nominated engineer and producer Will Yip to produce the new single. They also provided a psychedelic music video that brings to life the crippling thoughts constantly swirling around lead singer Will Lindsay’s head.

Unlike the delicate violet flower it was named for, “Hyacinth” is heavy and unsparing. The troubled lyrics give an unabashed look at the apprehension and anxiety that pile up on and plague Lindsay. When he divulges, “I don’t feel like myself anymore,” it sounds like the last shout from a sinking ship. The track channels the fear of the moment when the oxygen masks drop down on a plane, and you know you should help yourself before helping someone else, Lindsay said in a statement. But in this moment, most people just sit there completely paralyzed by fear, and this applies to life in general.

“New preoccupations pile up, hate begets chaos begets injustice begets polarization, we try to look inward and outward at once,” Lindsay said in a statement. “It’s a song about megachurches and myopia, the gods and the sciences at war on a small screen, alcohol and anxiety and anger and the internet and the aimless desire to help with everything all at once.”

In the music video, flashing lights and shaky camerawork contribute to this overwhelming feeling; as the shots of the band playing in their basement space constantly dissolve and disintegrate into one another, all stability is thrown out the window, giving you whiplash as you fumble through things with trembling hands and attempt to find your footing on shaky ground.

You can stream the video below.