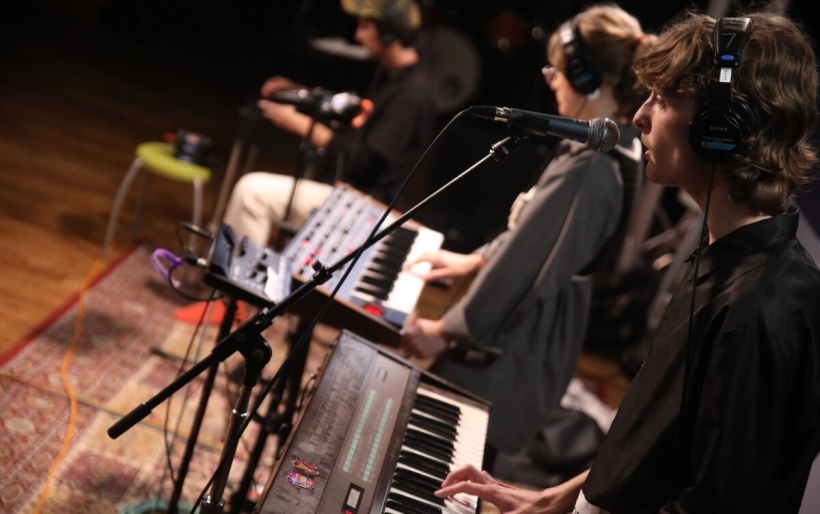 For Philly singer and songwriter Bobby Brown, the band Rentboy has been an ever-moving journey of self-discovery.

The music you’ll hear in the session below is an effervescent assortment of indie dance tones: vibrant house grooves, smooth saxophone and flute leads, massively catchy earworm choruses. This is vastly different from the Rentboy that Brown founded in 2015, when it was more of a rock group configuration, until “I got dissatisfied with rock groups as a format,” he tells me.

Somewhere along the way, Brown decided he needed to get out of his element, so when his lease was up in 2019, he picked up and spent several months in the residency program at Art Farm in Marquette, Nebraska, where in exchange for minimal labor, he got free room and board, and a studio space. He learned to pour concrete foundations during the day and fleshed out musical ideas by night. When he returned to Philly at the end of the hiatus, Brown began to assemble his friends from the scene of emerging producers in the Headroom Philly orbit to finish what he started at Art Farm, and the result is this year’s lively Head In Unlit Homes EP.

For the Key Studio Sessions this week, Brown recorded with a six-person version of Rentboy — Johanna Bauman of Janna on guitar and synth, Danny Murillo and Gavin Oswald on drums, Lev Spielberg on reeds, and Garrett Burke on bass, keys, and sound manipulation. These are all folks with extensive experience as producers and artists in their own right, and they’re the folks who join him when Rentboy plays live these days (as they will next Wednesday, November 17th, at The Dolphin). He says they are crucial to the project both onstage and in the studio, and help recreate the lush sound of the recordings.

“I think it’s great to always have people to bring into different situations,” Brown said. “Lev and Garrett are on the most recent [project I made], which still unreleased, and everyone else has been a pivotal part of making the recordings. And having people with a great deal of technical knowledge frees me up to dance onstage. I got over playing an instrument, I don’t want to do that anymore on stage.”

Brown’s music is deeply personal, and vivid with imagery — he likens it to exploring the story behind a single frame in a movie, and talks about how the unreleased new song “Famous Gemini,” performed in this session, captures the angst and loneliness of a highway rest stop where the elderly cross paths with 22-year-old Gen-Z folks with pink hair. Other songs talk of desire, and interpersonal connection, and you can watch them performed in the videos below. Be sure to check out the Soundcloud playlist as well to listen to my interview with Bobby, and head over to the XPN Concert Calendar to find information about that Dolphin show.