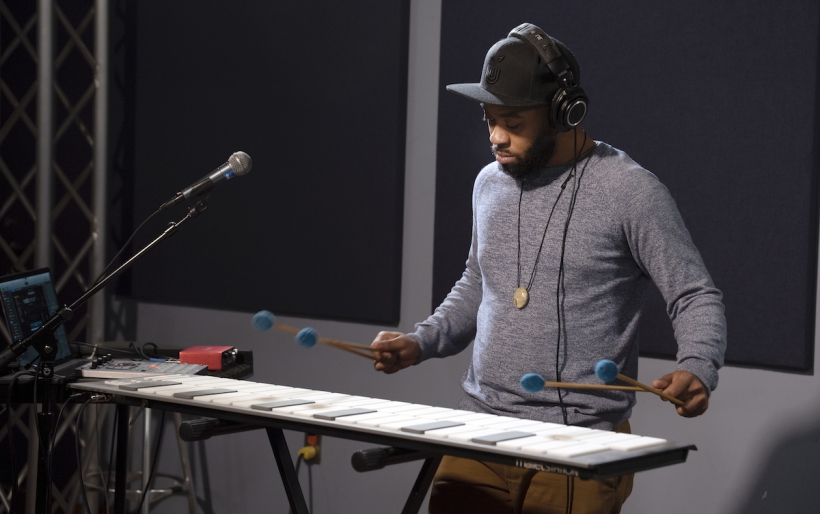 His name is Angelo Outlaw. He plays the vibraphone. Hence, Jello Vibes, who released a stellar two-part project this year called The Outlaw Sessions, fusing electronic beats and jazzy improvisational melodies in an immersive set of songs set for maximum chill energy.

Jello styles himself as an experimental percussionist, and after growing up in Philly, he planted some roots in the Nashville scene, where he taught and performed with the theatrical percussion group Music City Mystique. He returned back home to Philly and has been on a creative tear over the past two years, releasing an album and a collaborative EP in 2020, then linking up with the folks at Eraserhead Sound this year for the beautiful single “Forgotten Tomorrows,” which fuses old soul samples with trip-hop beats and Jello’s exploratory playing.

In this Key Studio Session, we see the secret to his technique in action — the Pearl Drums malletSTATION, a super portable synth vibraphone that impeccably replicates the sounds of the much bulkier and heavier acoustic vibraphone, but easily connects with the DAWs on his laptop to mix in with the beats of the moment he’s vibing to (pun somewhat intended), whether they be trap or boom-bap.

Watch Jello Vibes’ four-song set below care of NPR Music Live Sessions, and see him live and in person a few times the next few months: he’ll play a holiday set at the Singing Fountain on Passyunk Avenue in South Philly on December 11th, will take part in XPN’s Home For the Holidays livestream on December 21st (watch next week for the full lineup), and performs a pop-up set of his original music on January 14th at a to-be-announced secret location; follow him on IG at @jello_vibes and keep an eye out for details.