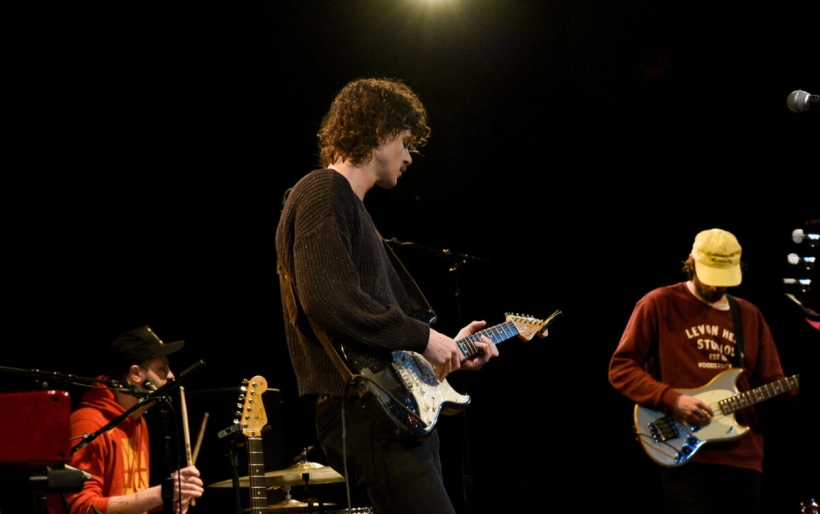 Indie rockers Houndmouth filled the floor in front of the World Cafe stage this afternoon for their second performance at XPN’s Free At Noon. Their first performance, back in 2015, came at a pivotal time for the band, who had been catapulted into fame after being discovered in SXSW by Reprise Records and opening up for Americana brethren The Lumineers on a nation-wide tour. Houndmouth today sounds different than they did back then: not only has founding member Katie Toupin departed from the band, but the theme of their music on new album Good For You is moodier and darker.

Opening with “Ohio,” a slower song from Good For You, Houndmouth set a comforting tone in the dark, windowless auditorium of World Cafe. Frontperson Matt Myers’ recognizable voice crooned softly for the excited crowd. Houndmouth’s set picked up with the love song, “McKenzie.” Their controlled sound transitions nicely from bare, repetitive guitar parts to building bridges and choruses with full harmonies. Above all, Myers knows how to take a tasteful guitar solo–letting the silence between notes mean just as much as the notes themselves–and fans were gasping, holding onto every run and lick he played. The two sparkling Stratocasters Myers played mirrored the star power he conjured.

Houndmouth closed out their set with the hit song “Darlin’” from 2015’s Little Neon Limelight and had fans romantically swaying. If you’re unfamiliar with the song, I’d wager you’ve heard it somewhere, somehow. The fan-favorite indie band will be back at World Cafe this Sunday night for a full performance. You can buy tickets for the show via the XPN Concert Calendar. And watch Houndmouth perform “Good For You’ and “Las Vegas” live at Free At Noon at the link below.