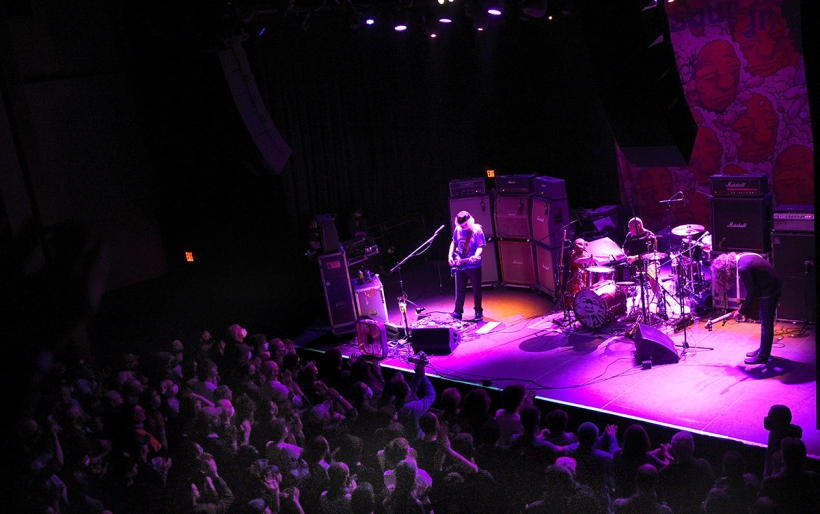 The Union Transfer stage was a little crowded Thursday night for the sold-out Dinosaur Jr. show. Three drum sets, a full stack, half stack Marshall cabinet set up stage left, a Marshalls double stack arc of sound for J Mascis, several guitar racks, pedalboards, and a short little gremlin creature dressed in their finest tropical muumuu. It was a Robot Wars of gear scenario Dinosaur Jr. and their opener, Ryley Walker, concocted. After all, it was time to shred.

Ryley Walker’s set read like a stand-up routine, accompanied by melodies and rhythms uninhibited by the verse chorus verse, 4/4 structure that’s widely understood. It’s designed that way, providing freedom for the band to stretch their legs. Ryley pointed out “a lot of Bill fans” in the house — referring to improvisationalist Bill MacKay, who joined him on guitar.

Ryley Walker and the band coasted through improvisation, both melodically and percussively. It felt like a swarming nebulous sound, seemingly tamed at will. It’s crafty musicianship and the crowd approvingly clapped each time the song leveled back out.

A crowd member remarked that one of the band members resembled Sufjan Stevens, and Ryley took the prompt and ran with it. “I’m Sufjan Stevens but richer” he said laughing.  Ryley tried to count “The Roundabout” in, but literally choked on his own laughter, resulting in the whole band chuckling their way into the first few chords.

“I love this banter. Wawa. We are all going to go to Wawa ok?” Ryley Walker said before walking off stage.

Dinosaur Jr. followed, J Mascis took his place in front of his Marshall cab trench as stoic and focused as always, the I Bet On Sky backdrop looming behind them. “Bulbs of Passion” kicked off their 18 song-set.  Fittingly, Murph’s resonant head art was the “sun” from the album that song appears on.

A few songs in, J did something he’s not well known for: banter.  He announced that the next song was from their last album and played a short 15 second little riff. He then stopped and thanked the crowd. Intentional or not, it left a smile on J’s face and the crowd cheered.

Sweep It Into Space, Dinosaur Jr. ‘s 12 studio album, dropped this past April.  They played “I Ain’t” first, followed by the second single the band released leading up to the album, “Garden”. Which is a song where Lou Barlow takes the vocal lead.

The energy level from the crowd noticeably picked up when the band, as a whole, went into “To Be Waiting.”  Security was ready for the crowd surfers shortly after that.

“The Wagon” off of 1991’s Green Mind sat in the middle of the setlist and signaled a redirect to the tried and true songs that made fans fall in love with Dinosaur Jr. Those would be songs like “Mountain Man”, “Start Choppin’,” and of course, “Feel the Pain.” All of which were gleefully sung along to, heads thrashing in unison.

They ended with another hallowed song “Just Like Heaven” also off of 1987’s You’re Living All Over Me. When the band left the stage and the lights came up, the crowd was a sweaty, happy mess.