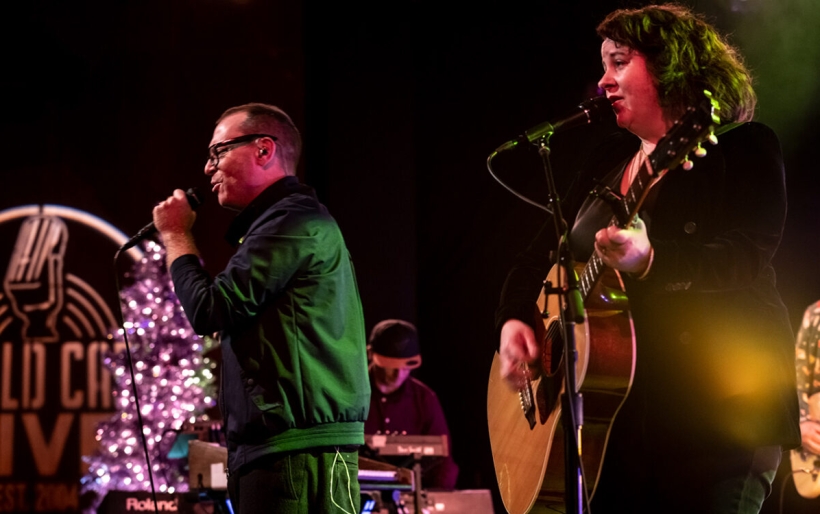 “Consume” is a funny word to write when describing art. It intimates ingestion. Stars does not make music for consumption, however. They have spent the last 20 years evolving, creating, and effortlessly designing emotional songs that consume the listener. They feel, therefore they are.

The Montreal band has rallied against the industrial complex that churns out content maximized to increase profits and forged their own path forward. On Saturday night at World Cafe Live they stood, unified, and made their declaration that they would not bow down. And they did so by playing a lot of really good music. Stars has evolved and throughout that evolution they have kept true to their core value that music can, and should, shape the human heart. It was a career spanning set that included a fair amount of yuletide joy.

On a stage adorned with festive seasonal decorations, the Canadian troupe delighted with tales old (“In Our Bedroom After The War” and “Elevator Love Letter”) and new (“Palmistry” and “Pretenders”). There was no shortage of Christmas cheer: A cover of “2000 Miles” by the Pretenders (which is, in reality, a super depressing song once you know the backstory, but I digress) and Judy Garland’s “Have Yourself a Merry Little Christmas.”

I wish I could say it was all cheer but it’s clear that the last two years have really taken a toll on bands like Stars. Working, touring bands who have had their income decimated by the inability to tour, streaming services that pay pennies for hundred of thousands of plays, and labels that parasitically take every last ounce of blood. It was good to be back, this was the first show I’ve covered in 22 months, but the longer I stood there, smiling underneath my mask with each new song reveal, each old song given fresh life, the more I realized that nothing will ever be like it was.

The good news? Stars makes a pretty good soundtrack for navigating the uncertain road ahead. You have to hold on when you get love and let go when you give it.