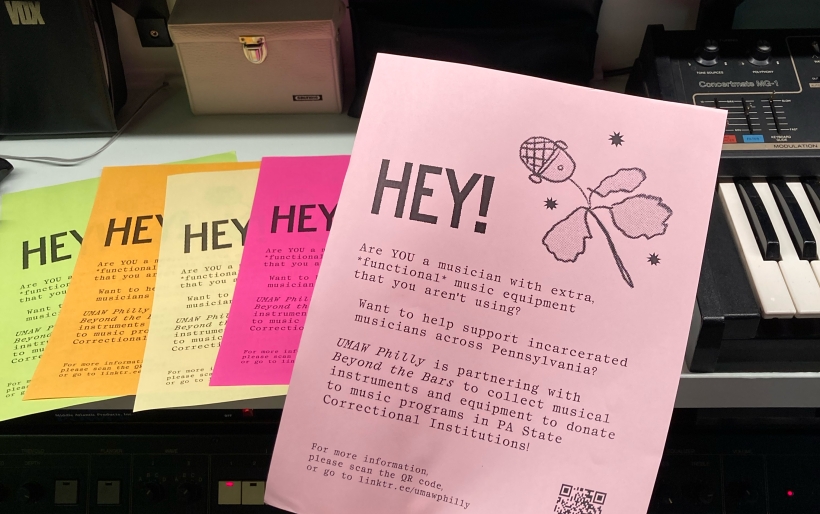 ‘Tis the season for…the Philadelphia music community to organize for the greater good. There have been a number of charitable events cropping up this season, including The Philly Holiday Album’s live show at MilkBoy on December 22nd, which benefits The Children’s Hospital of Philadelphia. And more recently announced, the local chapter of the Union of Musicians & Allied Workers (UMAW) is hosting a gear drive. Philly’s UMAW will be collecting donated instruments to distribute to PA State Correctional Institutions to support their music education programs.

UMAW’s gear drive finds them partnering with Beyond The Bars, a nonprofit organization dedicated to “interrupting the cycles of violence and incarceration.” (Learn more about Beyond the Bars and the work they’re doing for music students in Philadelphia here.) A wide variety of instruments and musical gear will be accepted for donation, but UMAW is asking specifically for instruments like guitar, bass, keyboards, and drums plus instrument cables, microphones, and laptop computers; both groups will be delivering the donated gear by the end of January.

The window for donations ends January 10th, so consider donating any equipment lying around the house before the rush of the holidays. You can drop off your donations at Beyond the Bars at 3500 Lancaster Ave on Tuesday 12/21 from 6-8pm, or arrange with UMAW Philly for pickup via their LinkTree here. Money donations are also accepted from those who don’t have instruments to donate. More information can be found in the infographic created by UMAW Philly below.