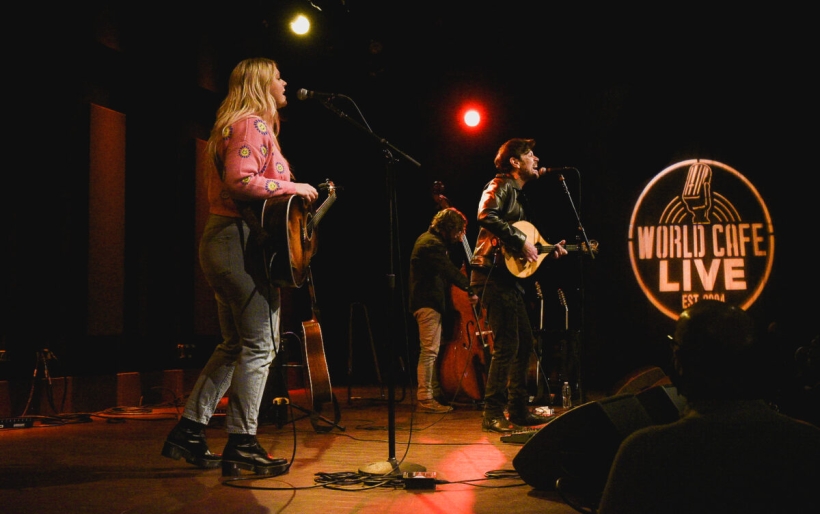 Veteran Philly singer-songwriter Eric Bazilian of The Hooters took the stage at Free at Noon today with two friends. He and guitarist Danny Black — aka Dan Schwartz of Good Old War — and Alexis Cunningham played covers, re-imagined Bazilian’s songs, and shared some of the new material they’ve all worked on together.

The set began with a “loving, radically reimagined version of an old fan favorite,” The Hooters’ hit “All You Zombies,” and with Bazilian’s mandolin taking the lead and a tempo notched down to a folk stoll, it felt reminiscent of another Bazilian collaboration — “St. Teresa” by Joan Osborne.

Introducing Cunningham, Bazilian spoke about recently coming across the first e-mail they ever exchanged — from May 4th, 2013. “We’ve covered a lot of miles and a lot of musical styles, and we’ve sort of landed where we’re meant to be,” he said of their collaboration. Cunningham called “Blind,” the song that followed, “the ultimate I hate you and I love you rock song.”

The set also showed off Danny Black’s guitar prowess on “Porch Pickin’,” a rambling acoustic jaunt reminiscent of Hot Tuna’s “Water Song” — aka the song that XPN’s top-of-the-hour harmonics are drawn from — and as a nod to that, the band ended the number with that iconic three-note chime.

The performance wrapped with two recent Bazilian originals — the politically themed “Heaven Ain’t Gonna Save Us,” written in the aftermath of the 2016 election, and the yearningly nostalgic “Back In The 80s.”

Listen to the performance and check out photos from the show below.

Eric Bazilian and Danny Black with Alexis Cunningham Free at Noon 12.17.2021
Setlist
All You Zombies
Driving In England
Blind
Technicolor Girl
Porch Pickin’
The Real Thing
Heaven Ain’t Gonna Save Us
Back In The 80s
Related Content
View All Related Content