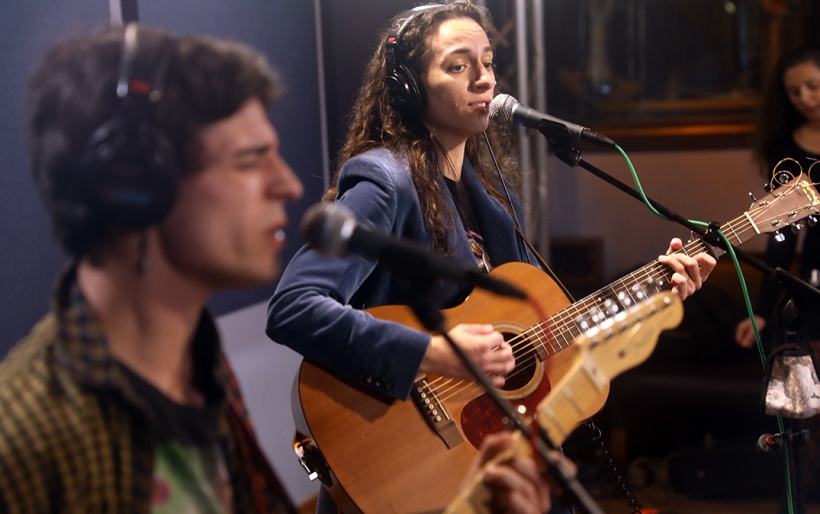 Kate Dressed Up | photo by John Vettese for WXPN

New Jersey-rooted singer-songwriter Katie Miller has been making music under the Kate Dressed Up banner for about six years, and that means a few different things.

It’s Miller, solo and solitary busker-style, and it’s also Miller the international collaborator, as we saw in her 2018 single with Ganda Boys. Lately, it means Miller working to some degree with multi-instrumentalist Vincent Karaitis, who’s featured on the project’s recent run of singles as a player and sometimes co-writer. And for the purposes of this week’s Key Studio Session, it means a robust band of five to seven players, bringing her emotive songs to life in a big way.

Miller draws inspiration from the folk music of the 21st century; she’s covered The Avett Brothers in the past and considers Anaïs Mitchell one of her all-time favorites. (Much of the set-up time during this session was spent discussing Hadestown as well as the new album Mitchell has on the way next month.) Sonically, her songwriting sits neatly along artists that became favorites on the mid-00s folk festival circuit, bridging the bright whimsey of Girlyman with the divine harmonies of The Civil Wars, while her lyrics circle around deep personal connections.

This performance spotlights the new music Kate Dressed Up has been trickling out over the past year; the soaring opener “How Could I Have Known?”, a love song about discovering one’s own queer identity, is punctuated by trumpet players Dawn Webster and Daniel Stern. Miller’s longtime friend Elyse Kiedaisch joins on vocals throughout and shines on the epic “History & Art.” And we hear how dynamic the whole band is on the lively bop “Ride Home,” with Karaitis’ guitar and harmonies locking in with Ryan Hillsinger on drums and Nick Iacobelli on bass.

Watch Kate Dressed Up’s Key Studio Session below, or scroll down listen to it on Soundcloud — that’s where you’ll hear a bonus performance of their latest single, “The Fountain,” which Kiedaisch describes as “CHURCH.” The new music is building to the latest Kate Dressed Up album, expected to see its release this spring. For more, follow them on all the socials at @KateDressedUp.