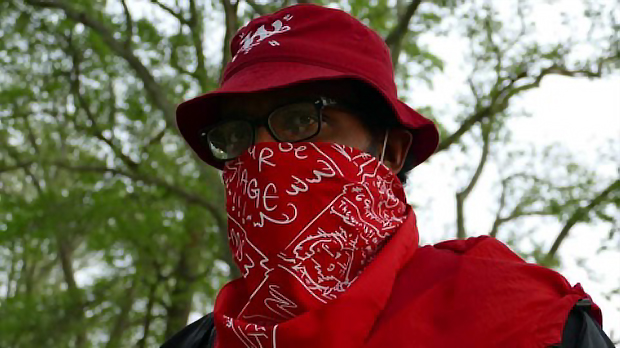 In the Southwest section of Philadelphia resides one of the cities best rappers: Dante Hill, professionally known as Uncle CrimSon. He is one of Philly’s brightest and most talented hidden gems. This emcee’s free-flowing and at times comedic style is a breath of fresh air in an often overcrowded landscape of too similar-sounding music. I recently got to sit and talk with CrimSon about his music and latest project Crim’s Deadly Sins, as well as how he developed his style and his other artistic explorations.

The Key: So tell us a bit about yourself, did you grow up here in Philly?

Uncle CrimSon: Yeah I actually bounced between North and Southwest Philly as a kid. But went to high school in South Philly. I went to Bok [Edward Bok Technical High School]. Studied engineering there.

TK: Oh wow, I can actually see an engineering aspect in how you build rhymes.

UC: Thanks, yeah it was cool. We had one of those robotic arms all that.

UC: Hahaha, well when I first started rapping I was in a group called the Reservoir Dogs. So like the movie we all had color names, I was Crimson. As I got older a bunch of my friends started having kids, so I was, well, I’ll be Uncle CrimSon.

TK: Your style is really unique. Who are some of your influences?

UC: Buckshot from Blackmoon, MF DOOM, early Eminem, Common, Nas — artists like that. A lot of golden-era artists. The 90’s early 2000’s, it’s my favorite time in hip hop.  I think my music really reflects that.

TK: You can definitely hear it in your music. I think on your new project Crim’s Deadly Sins, you can hear an Ol’ Dirty Bastard influence too, with the singing and playfulness you have on some songs.

UC: Yeah, he was definitely an influence. I like to stay loose with it. Have fun when I’m writing and making music.

TK: Your music and lyrics can feel effortless at times, almost stream of consciousness. What is your writing style, if you even write?

UC: I definitely write, I freestyle too. Freestyling actually helped me become [better] at writing. It loosened me up. Gave me more freedom, and allowed me to make better connections in my rhymes. I kind of think of it as two distinct things. Like the bars are the structure and the flow is how I make the connections in the rhyme. So inside the structure of the bars, I find where the flow fits. I play with rhyme patterns and can sometimes fall off count, but it’s intentional because I’ll have a point in mind I’m trying to nail, and I will find where to put it in. My style has really evolved too, when I first started it was more about shock value. Now for me, it is about painting a picture and having the listener get immersed in that picture.

TK: Your new project Crim’s Deadly Sins is obviously based around the idea of the deadly sins. What made you go with a concept album like this?

UC: My real name is Dante, so for a long time, especially with white folks, when I’d introduce myself the common response was “wheres the inferno?” Hahaha. So when I was thinking about a new project, I thought about that and I took the seven deadly sins concept from Dante Aligheiri and made it into my own thing and my own ideas. I wanted to express that in my own abstract way. I want to do more thematic projects going forward.

TK: That makes sense, and I think specifically for your style that really fits.

UC: Thank you. Yeah, I was talking with a friend and he asked me what was the purpose behind my art, and that really made me think I want to do more projects that have direction. Like, I still want it to feel free and have that stream of consciousness feel, but with more direction.

TK: Who are some of the producers you worked with on this project?

UC: I worked with three producers on this project. Rolled Gold Beats and Sadhugold both from here in Philly and my man Wino Willy in New Orleans. I normally like to work with one producer on a project, but with this one, I wanted a few different flavors.

TK: Also, I wanted to say I love the album artwork. You’re a visual artist as well, correct?

UC: Thank you. Yeah, I made that. I’ve loved art since I was young. I kind of go in and out of doing it, but yeah, it’s definitely a love of mine. I really enjoy cartooning I’ll fill a whole page in a notebook up with faces. I also do Philly graffiti hand styles and have been working on calligraphy. You can see that on my Instagram. I also have some tee-shirts and hats I’ve designed on FatSoTees.net

TK:Are you working on any new projects?

UC: Yeah I’m actually working on three new projects. I have one with Wino Willy and his mans Delicious Beets, called 2 Hands 80 Rings, and that should be out in the spring or summer. I have one with Rolled Gold and one with Sadhugold. But folks can keep up with my stuff on my IG @fatcrimson.

TK: And Crim’s Deadly Sins is available on Bandcamp correct?

UC: Yes, it’s only on Bandcamp, but future projects will be there and all the other streaming services. But you can definitely follow me there so you don’t miss anything.