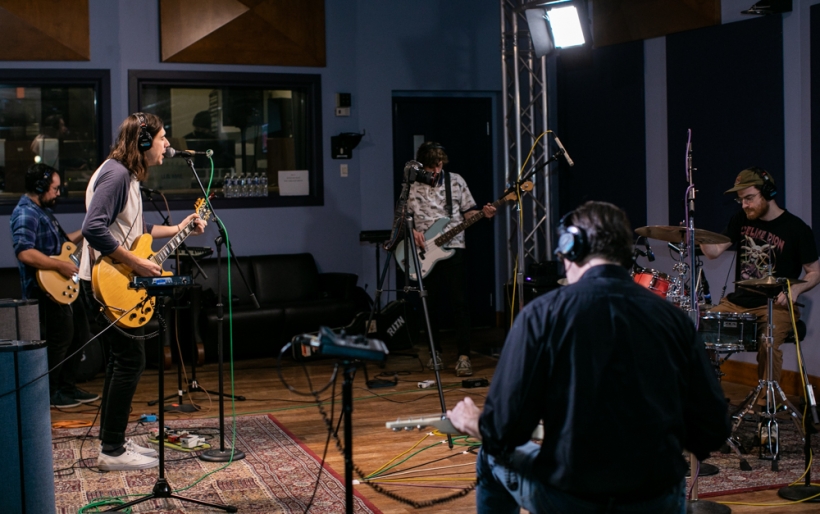 Though he’s lived and made music in Philadelphia for the better part of ten years, Maxwell Stern will forever be an Ohioan. The contrast between his midwestern roots and his east coast life plays out poetically on Stern’s gorgeous 2020 LP Impossible Sum, released on Lauren Records.

A longtime member of various acts in the DIY punk ecosystem — as we hear in the lyric “I was much too busy playing in a band” from “Going To My Brother’s House” — the album explores a different, more introspective side of Stern’s writing. Lyrically he details the contrast between country and city, utilizing images of bustling commuter trains and the tributaries of the Ohio River, of superconnected cellphone-clutching cosmopolitans and skylines free of light pollution. All of this is awash in the acoustic strums, electric snarls, and shimmering slide guitar or rust belt Americana; think Neil Young, Grant Lee Buffalo, and Songs: Ohia.

Stern and his band join us at WXPN studios this week for a Key Studio Session — they’ve got Philly icon (and Songs: Ohia album) Mike “Slo-Mo” Brenner doing those slide licks, as well as Jon Hernandez on electric guitar and vocals, Eric Muth on bass, and Nicholas Holdorf on drums. We hear two highlights from Impossible Sum, and the entirety of last summer’s Teeth of a Key EP.

Watch and listen below; though Stern does not have any solo shows at present, his band Signals Midwest has stuff brewing for this year, and you can follow him at @maxwellstern for updates. You can catch his other band Timeshares on Saturday, February 12th when they open for The Menzingers at Harrisburg Midtown Art Center; details at the XPN Concert Calendar. Grab a copy of Impossible Sum and more at Maxwell Stern’s Bandcamp page.