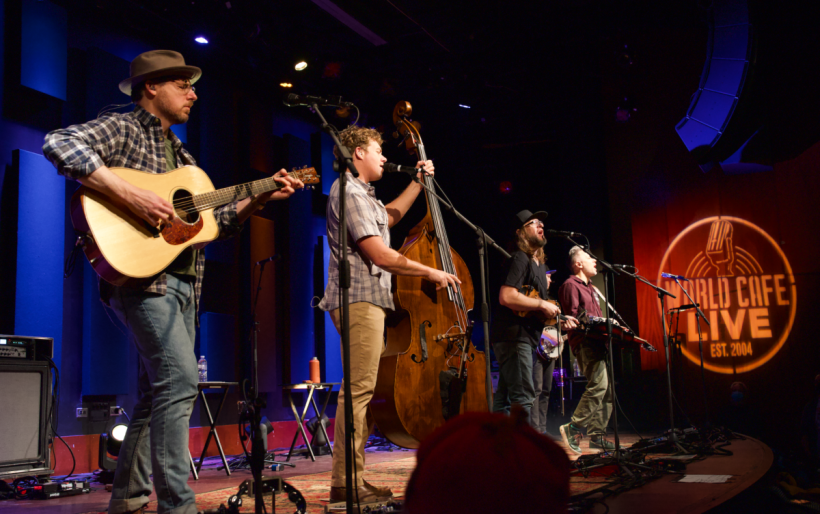 The Infamous Stringdusters | photo by Paige Walter for XPN

It was clear out the gate at The Infamous Stringdusters’ Free at Noon concert that a lot of pickin’ and shredding was going to be on display for the next hour.

The Nashville progressive bluegrass band had all the pieces in place — upright bass from Travis Book, acoustic guitar care of Andy Falco, electric fiddle licks by Jeremy Garrett mixing with dobro from Andy Hall, and an undercurrent of banjo by Chris Pandolfi. Their playing was nimble and intricate, mixing the best of folk tradition with a unique pop voice.

The band opened on “It’ll Be Alright” from their 2010 album Things That Fly, getting the show off to a strong start with jams and interactivity, an a seize-the-day message: “Got to take the chances when they come, don’t wait for something or someone, hate to miss the chances at life, so say yes it’ll be alright.”

The messages become more solemn when the Stringdusters turned to selections from their new album Toward the Fray, out February 18th; “Hard Line” has a frustrated hook about the world crashing down, while the contemplative title track advocated for compassion in trying times: “There is no other way to love except to turn our timid souls toward the fray.”

Beyond the lyrics, the music was a dynamic burst of energy and emotion. “Toy Heart” from their 2021 project A Tribute To Bill Munroe was fast and frenzied; Book called the songwriting legend “the father of bluegrass music, the reason we’re all here. Elvis Isn’t Elvis without Bill Monroe.”

The mid tempo country tune “I Didn’t Know” from Towards the Fray got its live debut, two songs from 2019’s Rise Sun got the audience clapping along (the title track) and contemplating the significance of their pace in the universe (“Planets”), and an atmospheric vibe-out led strongly into the set-closer, an ecstatic take on the title track from 2007’s Fork In The Road.

Listen to the performance in full, watch a couple videos and check out a photo gallery below. The band plays The Met Philly tonight with Greensky Bluegrass; tickets and more information can be found at the XPN Concert Calendar. For past performances, visit our Free at Noon archives.