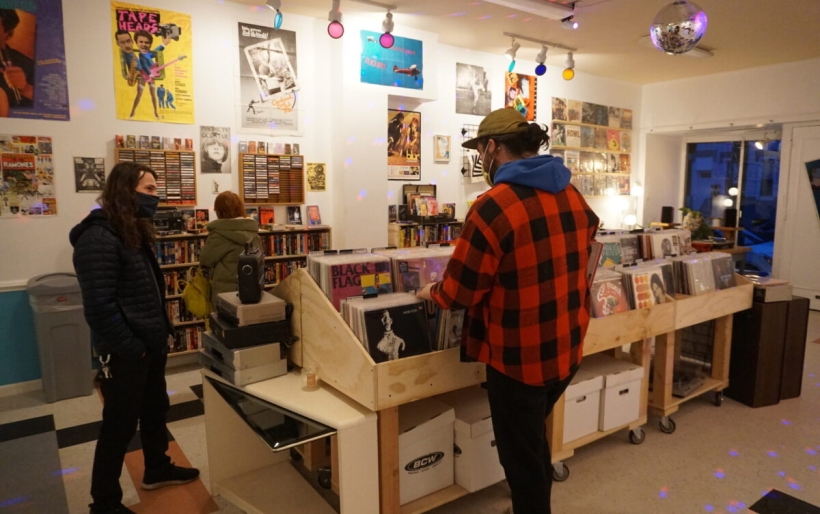 If you’ve hung around the music scene for any length of time you might have a general sense of what “do it yourself” means as both a mantra and an ethos. Bands that book their own shows, venues that run everything themselves, that sort of thing. But what about something like opening a record shop or bookstore? Does that still fall under that same DIY banner? If you ask Mike Vee of Launderette Records and Drew Waldo from Lot 49 Books, Records and Small Press — both of which opened for business at the end of last year — the answer will be a resounding yes.

Well, maybe not resounding. Vee said that getting Launderette ready for its December grand opening was “a mad rush” that involved a ton of construction and carpentry work he had never, ever done before, including replacing the floors and walls as well as fabricating shelving. He recruited a number of friends to help and they managed to transform it all in just a couple months. Vee highlighted the contributions of visual artist Angela Rio who created the Launderette logo, did all the painting, and helped with the layout of the store and specifically the design of the floor tiles. Rio has also been responsible for curating the art on the walls of the shop. “She’s been extremely instrumental,” he said.

Prior to its current incarnation, the Port Richmond building – 3142 Richmond St, two minutes from the Allegheny Ave. I-95 exit – had been a storefront church and community center for recent Polish immigrants that was, Vee explained, barely in use anymore. According to him, “They were only here like one day a week, so I think they decided to downsize.” That speaks to the ebb and flow of Philadelphia’s neighborhoods and the different populations that call them home.

Almost on the other side of the city is South Philly’s Lot 49, which is situated at 1713 S 6th St., about half a block from Morris. The space the book and record store inhabits has a storied history in the local punk scene: it was the home of legendary DIY venue Disgraceland, which hosted punk and metal gigs for a number of years in the mid-aughts. Since they stopped having shows around 2009, the building has been used only for housing, though according to Waldo the owner always had the thought that something needed to open up on the first floor again. While they had fixed up the space a little with the idea of maybe turning it into an apartment or renting it out to a business of some kind, nothing had come of it before the pandemic started.

Waldo has long been friendly with the owner and the people who live in the building, but did not pitch his bookstore idea until a little more than a year ago. That’s because the idea did not yet exist. A voracious reader with, as he put it, most of a degree in English, he had been working as a bike messenger and dispatcher basically since moving to Philadelphia in 2013 and was pretty content to keep doing just that. However when COVID temporarily shut down his job, he started contemplating other options.

“I was reading a Lawrence Ferlinghetti biography and he was talking about weird bookstores … and I got to thinking,” he said. The late Ferlinghetti was a Beat-era author who founded City Lights Bookstore in San Francisco, a veritable counterculture institution. Still, it wasn’t until he had a conversation with his friends at the building in late 2020 about how that first floor still wasn’t any closer to being used for anything that this coalesced into something real.

“It just seemed like an accessible thing to me,” Waldo explained. Although there were still lots of hurdles to opening – including dealing with the Department of Licenses and Inspections, even though the building did have a commercial zoning license going back to when it was a barbershop in the 1980s – this felt very doable to everyone involved. While they were figuring things out with the city and fixing up the room, Waldo began testing the bookselling waters by doing popups and online sales, amassing a large collection of books and zines that laid the foundation for Lot 49’s extensive selection. Although he had never even worked in a bookstore before, he was ready to jump into the deep end.

The types of literature sold at Lot 49 runs the gamut from punk memoir to classic and modern fiction to poetry, politics, and more. He told The Key that he is always looking for more things to showcase, especially from Philadelphia writers. There is also a selection of music for sale that’s curated by Philly’s Better Now Records, a mostly-online store Waldo has partnered with. The shop is named after the 1966 Thomas Pynchon novel The Crying of Lot 49, one of Waldo’s favorites. The conspiracy theory-laden story is celebrated for its postmodern critique of identity and culture, a fitting namesake. Asked for his favorite bookstores – and perhaps ones he draws inspiration from – he named Capitol Hill Books in Washington D.C., as well Brickbat and Joseph Fox here in Philly, the latter of which recently announced it was closing after 70 years.

Vee at Launderette took a slightly more direct route to running a store: he has been in the record-selling business for a number of years, both in the physical realm – he used to work at Milkcrate Cafe on Girard – and online. The latter was something he was especially getting into during the first part of the pandemic to make extra money. He explained how that was a major reason Launderette happened: “This place just came along because I was getting really sick of using my house as a storage and shipping facility.” He posted online asking if anyone knew of a storefront for rent and a friend put him in touch with Mike Parsell and Cary Borish, the owners of the property.

These days Parsell is known for his work in the rehab and construction business – the company he, his wife Lena Parsell, and Borish run is called A Frame Constructs and they’ve been responsible for developing spots including Pizza Shackamaxon, Philly Style Bagels, Martha, and Lunar Inn – but his roots are in punk music. Back in the 90s and early 00s, Parsell played in the pre-Ink & Dagger Bands Frail and The Mandela Strikeforce, AM/FM with Brian Sokel from Franklin, and more. Most recently he was in Le Rain, a funky art rock band that was started in 2019.

According to Vee, Parsell and Borish told him that they were actually looking to open a record shop, which is a fair bit of kismet for everyone. Not only that but they encouraged him to figure out how to have bands play in the basement, something Vee, who has a long history of booking shows and parties around the city, said he never expected to hear from a landlord. “I was shocked,” he said with a laugh.

The storefront itself is “way bigger than I expected,” Vee said, which forced him to brainstorm more things to do there than just sell records. He wanted it to be a gallery and event space, a community resource, or as he put it: “Anyone who wants to use it, we can rearrange it for them.” To that end, all of the record shelving he built is on wheels so the room can be cleared relatively quickly. There is also a kitchen in the back and the aforementioned basement. While the name of the store is Launderette, that is not due to it ever having been one or there being any laundry facilities on the premises. It’s part inside joke – two of Vee’s friends moved into the apartments above the shop and realized there were no laundromats in the immediate area – and also a reference to the classic post-punk song “Launderette” by Vivien Goldman.

Currently the shop is about half vinyl records with a large selection of VHS tapes, some books and cassettes, and art on the walls from Jennifer Williams, Brigid Wallace, and Lena Kolb. Vee said that his plans for the immediate future are to bring in even more music. He is also hoping to host more events when it’s safer to do so, a sentiment echoed by Waldo.

Port Richmond is not a neighborhood known for record stores or much of a DIY music scene, but that doesn’t mean it’s a cultural vacuum. The huge Polish-American community there stretches back more than a century and is but one of many immigrant groups that call the area home. There are countless events, parades, Polish restaurants, the celebrated Polish-American String Band, and everything else you’d expect to find. It was also the location of one of the best bookstores in the city, Port Richmond Books, which unfortunately closed down in 2019.

Though it’s not as north or east as the city goes, Port Richmond feels isolated in some ways, even from the rapidly-changing neighborhoods of East Kensington and Fishtown right beyond its geographic borders. Still, it is changing, and a record store full of punk and jazz platters moving into what used to be a community center and church is proof of that. But Vee said that the shop has been made to feel welcome. “Everyone on the block seems to like the space,” he said. “The neighborhood is pretty happy that I’m here. People like to see something different, something new, that’s not another bar.”

Both Vee and Waldo are very surprised to have their own stores. Neither ever expected to have this opportunity. Waldo joked that while he always wanted to work in a bookstore – the closest he got was when “I filled out the Borders Books 33-page personality quiz a couple times as a teen” – he’s now somehow found himself in the position of owner, boss, and sole employee. But like Vee, he’s not in it alone: in true DIY fashion, they both have the backing of a strong community of people who have supported them from the beginning. That support has included everything from location-scouting to heavy construction to advice on crafting a business model. Considering the amount of work that has gone into both stores, much of it being things that Vee and Waldo readily admit to not knowing how to do before, it’s safe to say that Lot 49 and Launderette would not exist without that help. As Waldo put it, “The people and resources the community offers are amazing.”