Inside the dreamlike world of pop alchemist St. Sol - WXPN 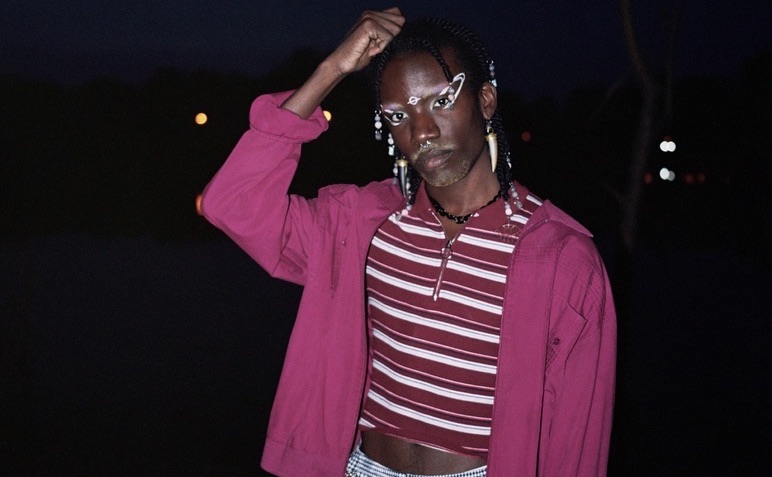 St Sol | photo by Georgia Westcott | courtesy of the artist

Inside the dreamlike world of pop alchemist St. Sol

St. Sol is self-described as an avant-pop artist, but underneath that gossamer-thin genre coating lies an ever shifting darkness that can only be felt viscerally. One listen to their haunting EP Limina, released back in September, reveals both the harrowing bleakness and the strange, intrinsic joy found in isolation.

From the feverish rush of the echoing industrial drum breaks of opener “Magna,” to the creeping minimalist noise-funk of electronic jam “Narcissus” and its equally creepy video, to record closing dream dirge of “While Sleeping, Watch,” there are five tracks here that cover an ever-expanding musical oeuvre. The progression of St Sol’s music, from the experimental pop of their debut Amphibian to 2021’s Limina is a fully-realized sound that bangs as much as it sweeps, wafting in on delicate sheets of sound — it’s like Arca or Clams Casino made tracks for a gayer / weirder / Blacker David Bowie, with St. Sol’s vocals bringing a surprising warmth.

And although St Sol’s world is made of myth, is dreamlike, we were able to sit down with them to talk about Limina — their dark, twisted fantasy, and the power of pop music to inspire new ideas, to shape worlds.

The Key: You consider yourself avant-pop, yes? What does that genre mean to you? Do you find genre restrictive?

St. Sol: Good question. I tend to find them restrictive. I even struggled to settle on “avant-pop” — that genre I’m not fully settled on. To me, it means that I’m inspired by pop music. I feel like maybe when I was younger there was this big shame around admitting to liking pop music, even now being an artist especially there’s this air where you’re supposed to pretend you’re better than that. I think that in avant-pop, there is something to the idea that there is something to be drawn from pop in the way that it works across mass cultures but can be tweaked and explored and stretched into ways that means different things to different people.

TK: Mm, yeah that makes sense. So what was pop your path to music? Was there a moment that you can remember where you were like, “wow I want to actually make music”? Was there a certain moment in your life where that kinda hit?

SS:  Yeah, my path — I’d always been adjacent to music somehow whether it was theater or like, I played viola in middle school, stuff like that. Really the first moment where I was like, “I want to do this music thing”, was actually at a Lorde concert in 2014. My parents got my ticket, me and my friends went, and it was my first concert of my choosing, and I remember just the intensity of seeing the music that you really, really loved shared with that many people and the feedback loop between the performer and the audience. There’s just nothing like it. I vividly remember in that moment while I was crying while Lorde was playing, thinking like, “wow, that’s what I wanna do…I wanna live in this feeling.”

TK: I feel like your stuff is influenced by a lot of the music that was popping in that era. I hear a little Weeknd, a little FKA Twigs, but I also hear like some witch house vibes maybe? Is that something that you gravitate towards, those strange post-R&B vibes?

SS: Yeah, very much so. I wouldn’t even say post R&B, but definitely people who do that avant-pop thing of like, “here’s a very popular genre, and here’s what you can do to make it like you’re seeing it through some bizarre filter or as if you remembered a song through a dream.”

SS: That is a beautiful question. Umm…how do I go about this?

SS: So the title of the EP is Limina, which came from the idea of the liminal space of the mind being a place full of potential. I think fantasy is one of those places and the imagination is where we draw from to create our world. And I think, especially the queer and non-binary Black people that I know, as a survival mechanism, we know that our imagination and our dreams are where we can find peace and safety and freedom in a world that wants to take all those things away from us.

SS: I had listened to a podcast that had rehashed the story of Narcissus that was more about coming to a self-image that you don’t recognize, so finding something in yourself that you don’t recognize as part of yourself and integrating that is sort of how we transform and move on from the past. It’s not a linear straightforward video, but the idea of the deep dark woods and the water underneath, there’s a lot of symbols of these unconscious places which are, like, representations of where we hide the things we don’t want to recognize as parts of ourselves.

TK: The song itself is filled with these simple, elegant lines. I love the line, “think like prey”. That is just a really powerful line to me. For me, I get you’re talking to and about the most vulnerable among us. It relates back to how you were saying, queer and non-binary people can use fantasy and escape as a means of projecting ourselves into the future, right? But when you say, “think like prey,” I think you’re thinking of survival and how the most vulnerable of us are able to navigate different pathways, that’s very interesting to me.

TK: Word. What was the recording process like, particularly on tracks like “Event Horizon”, it’s a very unique, resonate sound.

SS: My recording process is me in my bedroom with my laptop. [laughs] “Event Horizon” came together as a full song really quickly, lyrically and melodically, and I really wanted it to feel like I was using my voice as an instrument. I guess that’s still surprisingly newer territory for me? I generally lust free flow and let whatever comes out come out, and then shape it from there. But as the song was coming together I felt really strongly, in the writing process, where I see myself performing this one live.

TK: It def has that big, fill-the-room sound. Which isn’t easy to get on a laptop. Whatever tricks you were using was really impactful. Do you spend a lot of time developing that, shaping the sound? Is it more like how you describe your lyrics as freeflow or do you sit there for hours  tinkering on a specific hi-hat here, drum sound there?

SS: Mm, it’s very song-by-song, I’ll say? But generally a bunch comes out at once. I’ll spend three or four months tinkering with it, twisting it, refining it then a bunch more will come out in a huge, other wave that’ll like, completely alter what was already there, and the rest of the time I’ll spend tweaking and refining. It’s that push and pull.

TK: What was the progression from Amphibian to Limina like? Whereas Amphibian seems more minimal, Limina seems grander. Was that intentional?

SS: Yes, very much so. Amphibian in my mind during the making of it was not supposed to be an album, I didn’t sit down and say, “I’m going to write these many songs as an album.” It was just the emotions as they needed to come out of me.

TK: Like, “here are my songs” kind of thing.

SS: Yeah. Whereas Limina, I was thinking more about the craft of music and developing aesthetics more consciously than just letting it fly out.

TK: And this was written during COVID?

SS: Definitely. “Narcissus” I think I actually wrote before COVID, but as an EP it all came together throughout quarantine. I was listening to Charlie XCX, son lux, FKA Twigs — the quarantine definitely fucked everything up of course, for everyone. Because Amphiban was so much about isolation and what that does to you and how you’re forced to see yourself through it, Limina was a continuation of that work. But in that process I felt I had more tools to not just sit in the feelings but to work with them and grow with them.

Dig into St. Sol’s catalog on Bandcamp, and keep up with them on Instagram.