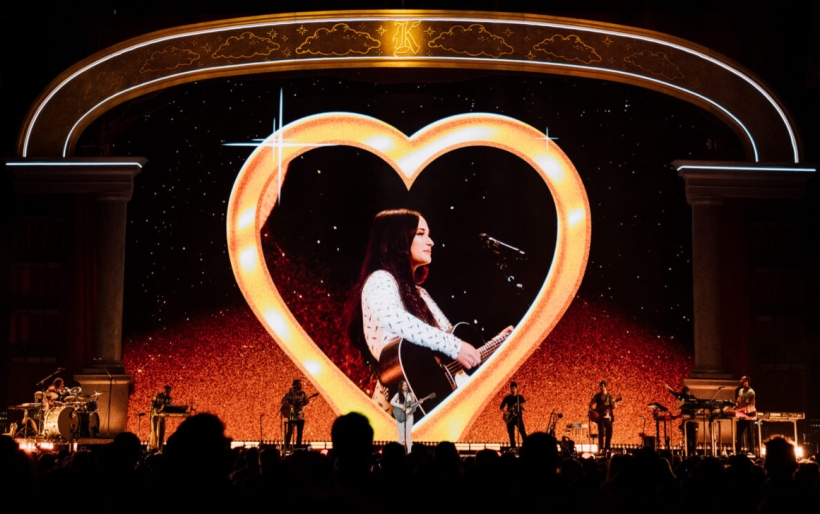 “It feels good to be off the couch and out of your PJs, amirite?” Kacey Musgraves inquired last night as she looked out at the pink cowboy hat clad, sequin-covered, glitterbombed Wells Fargo Center Crowd. “Though honestly, it looks like some of you still have your PJs on.”

Laughter, cheers, and just a small example of the warm rapport the country-pop singer-songwriter shares with her fans. So much so that last year’s star-crossed, an eclectic but rather sad record written in the aftermath of her divorce from Ruston Kelly, has her headlining for her biggest audiences to date on an arena tour that launched earlier this month in Minnesota and continued last night in Philly.

“If you have any kind of broken heart, we’re gonna heal that shit,” she said. “We’re gonna have fun even though my album is pretty fucking depressing.”

Taking personal lows and transforming them into uplifting moments of joy is something Musgraves excels at — she notably sang of feeling “happy and sad at the same time” on 2018’s Golden Hour. Last night began very much in our collective feelings, touring the moment heartbreak hits (star-crossed‘s title track), unpacking the ideals-versus-reality of a romantic partnership (“good wife”), and finding solace in childhood nostalgia (“simpler times”). But between bright melodies, warm arrangements of banjo and pedal steel from her seven-piece band, and an overall dynamic delivery, it never felt like a downer. Even on “cherry blossoms,” which lyrically is a plea to one’s partner not to leave: a gust of red and white confetti falling from the rafters turned the mood serene.

And then there were the moments of pure exuberance — a reflective stretch of songs from Golden Hour, with the radiant title track weaving into the giddy bop “Butterflies” into an arena-wide singalong to “Lonely Weekend.” “You guys are so cute with your cowboy hats and signs and shit,” Musgraves said to fans in the pit, creating the atmosphere of a chill hang rather than the stiff detachment that most performers at her level guard themselves with.

Oh her few days off in Philly: “I went to that crazy-ass museum with all the dead shit.” (We’re assuming she’s talking about the Mutter Museum.) “I feel like I have to wash my eyes.”

As the room lit up even more during the discofied “High Horse,” flowers and gifts began to be passed forward, including a pillow hand-embroidered with the face of her rescue puppy Pepper, designed by TX-via-Philly artist Chelsea Crawford. She showed it off to the arena, then set it down side-stage for safe keeping.

Truly Musgraves makes her fans feel like a community, turning the setlist over to them during the karaoke portion she’s been doing on this tour. Presented with a list of four cover song choices, a day-one fan up front chose Dolly Parton’s “9 to 5,” which of course Musgraves nailed.

Though only one song was in the mix from Same Trailer, Different Park — the darkly humorous scene-setting “Merry-Go Round” — the set encompassed Musgraves’ journey from pure country to pure pop, and at the end of the night she told the crowd (before climbing a candle-lined staircase to the flamenco strains of “gracias a la vida” and disappearing in a dramatic backwards swan-dive offstage) “Thank you for supporting me in all my creative chapters.”

Musgraves’ openers on this tour also find themselves in a similar mode of stylistic exploration: Los Angeles five-piece MUNA, last seen around these parts opening for Phoebe Bridgers at the Mann, dabbled in both electrifying 80s-styled anthems (“I Know A Place”) and as well as downbeat country to compliment their tourmate (“Taken”).

Indie darling King Princess was more eclectic in their set, with roof-raising moments in the vein of Queen (the new “For My Friends”) and burning barroom ballads reminiscent of Tom Waits (“Do You Wanna See Me Crying?”). It was solid, if a bit of a grab-bag, and when “1950” rolled around, it seemed like their breakout song remained their strongest. Until the set-closing “Let Us Die,” that is, another new cut and easily the high-point of their performance. On the strength of that song alone, it seems safe to say King Princess will be bigger than ever when their next album drops.

Below, check out a gallery of photos from the show care of photographer Skylar Watkins, who you can follow on Instagram at @thesadpunk_.